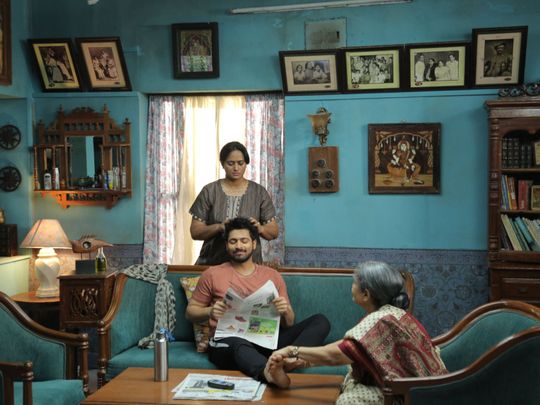 Ayushmann Khurrana’s debut film ‘Vicky Donor’ was centred on the topic of sperm donation — generally a hushed up subject in Indian society.

This critically-acclaimed film launched Khurrana’s career with a bang and is remembered even today as a good entertainer.

Director and screenwriter Krishna Marimuthu marks his Tamil cinema debut with the Tamil remake of ‘Vicky Donor’. The film is titled ‘Dharala Prabhu.’

Marimuthu began his career with the Telugu film, ‘Yudham Sharanam.’

“The rewriting of the script was the biggest challenge,” said Kalyan. “The Tamil culture and sensibilities had to be kept in mind. My character is different though the soul of the story remains intact.”

Kalyan completely relied on his director. “Prabhu is Krishna’s creation. He dared to take on a bold subject on his Tamil debut. His inputs helped and he was open to suggestions. We improvised on the sets. And, when I had self-doubts, Krishna’s assurance gave me strength. We have addressed new issues in the remake without being preachy,” said Kalyan, emphasising that he did not copy Khurrana.

“It’s my take of Prabhu. Prabhu initially finds sperm donation a new thing, but in the second half he has to make emotional decisions. Besides, there is the cat and mouse game he is caught in with the doctor who runs the infertility clinic,” Kalyan added.

Tamil comedian Vivek reprises Annu Kapoor’s role from the original. Matching steps with the veteran actor was not easy for Kalyan.

“It was a learning experience and fun too,” he added. “Vivek sir is open minded and not at all overpowering.”

Tanya Hope returns to Tamil cinema after ‘Thadam.’ She essays the role of Yami Gautham from ‘Vicky Donor.’

Hope said that while both ‘Vicky Donor’ and ‘Dharala Prabhu’ deal with sperm donation, the characterisation of Vicky and Prabhu are different. The Tamil remake has more layers.

“Vicky was a chilled out guy unlike Prabhu who is mature and focused on his work,” said Hope. She plays Nidhi a Coorgi woman. “Nidhi is reluctant to get into a relationship. I had to delve into her reserved self and her body language.”

The supporting cast includes veteran actress Sachu in the role of Prabhu’s grandmother and Anupama as Prabhu’s mother.

Interestingly this film is a collaboration of eight musicians including Anirudh, duo Vivek — Merwyn and Sean Rolden. S K Selvakumar is the cinematographer.