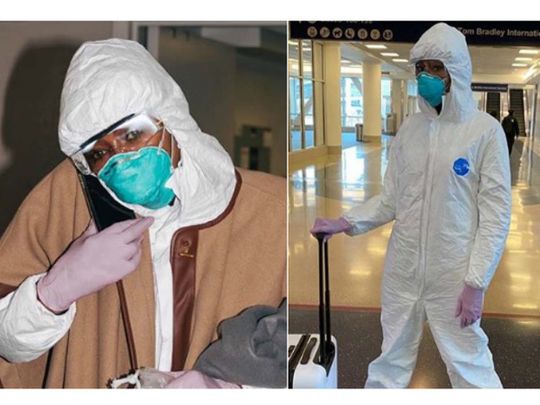 Supermodel Naomi Campbell recently posted several images of herself boarding a plane at Los Angeles International Airport on Tuesday while wearing a hazmat suit, a pair of goggles, a face mask and pink latex gloves and people are loving it.

Campbell has long been known for staying germ-free while traveling and she has posted videos in the past doing that as well. Last year, she shared a clip of her intense pre-flight ritual, which involved wiping down everything close to her airplane seat with anti-bacterial wipes.

The 49-year-old, in one photo is seen posing at Tom Bradley International Terminal with her suitcase, while another shows her on-board a plane wearing a cape draped over the protective suit, with one latex-covered hand clutching her mobile phone to her ear and the other gripping on to a transparent plastic bag. In another post, she shared a picture of her wearing a hazmat suit in a car.

Cambell also wrote in the caption that the “full video” on YouTube is soon to come.

The model’s pictures were a hit online with people commenting and sharing the images.