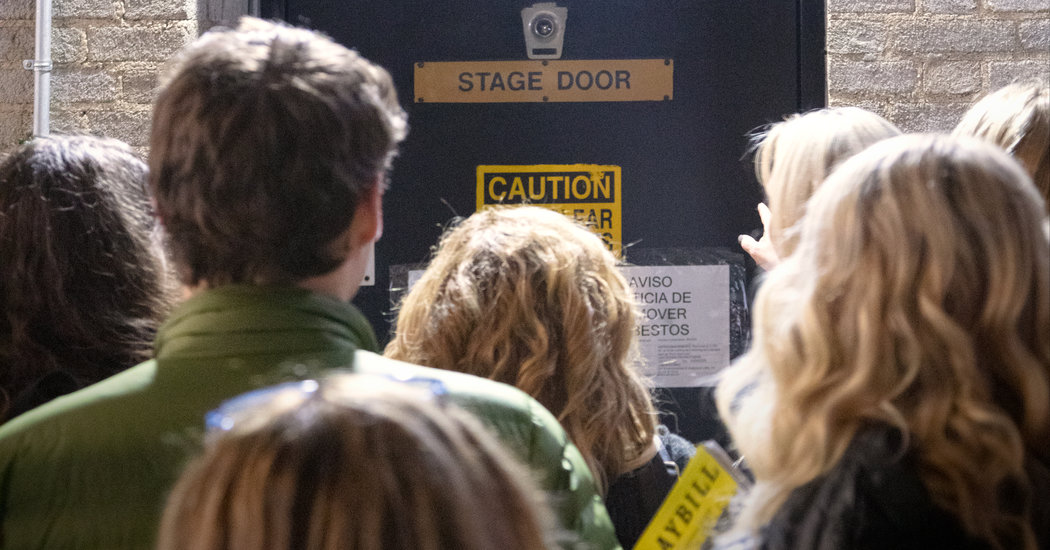 The scene is a staple of Broadway: After a show ends, its most ardent fans gather at the stage door, hoping for an autograph, an Instagrammable photo, or even a conversation with their favorite star.

But this week, facing a widening coronavirus outbreak that threatens public health in New York and around the world, the theater industry’s leaders said they wanted to put a stop to the practice.

“We are highly recommending that all stage door activities be eliminated for the time being,” the Broadway League, a trade organization representing producers and theater owners, said on Tuesday.

The step is the latest in a series of actions the theater business has taken to keep its plays and musicals running while also protecting public health.

Broadway, an iconic New York industry that drew 14.8 million patrons and grossed $1.8 billion last season, is vulnerable to economic damage from the outbreak for multiple reasons: Its audience skews older, and older people seem especially vulnerable to this virus; its audience is heavily made up of tourists, and travel is drying up; and its events involve large numbers of people packed into tight spaces — a situation risky enough that it is being banned in some countries.

Broadway’s leaders say they are determined to keep their theaters open if at all possible, and anticipate that they would collectively close only if ordered to do so by a government agency. (That is not unthinkable: Some performance venues have been closed in Austria, Germany and Italy, among other places.)

There are currently 30 shows running on Broadway, and so far overall attendance has held steady — there were 253,453 patrons last week, up slightly from the previous week. And many ticket buyers are clearly still eager to see theater.

“I guess I’m not willing to stop my life unless I’m forced to,” said Wendy Hanna-Rose, as she stood on Tuesday under the awning of the TKTS discount-ticket booth in Times Square, deciding which show to see that night. She and her husband, Craig Rose, already had tickets to “Hamilton” the following night for their family of five and they were hoping to squeeze in another show.

They said they considered the threat of the virus before making their spring break trek from State College, Penn., but decided that if Broadway kept its doors open, they would be in the audience on Wednesday evening. “So we’re here, just trying not to touch our faces,” Hanna-Rose said.

But many industry officials say that advance sales are starting to droop, suggesting that attendance and gross revenues will most likely take a hit in the coming weeks. Among the early indicators of potential problems: Disney’s three shows, “The Lion King,” “Aladdin” and “Frozen,” all dipped. And a number of student groups have canceled trips to Broadway shows, either because their schools have closed or their districts have advised against the events.

“The industry is going to be fine — there’s going to be a bit of an inflection for a period of time, but theater has survived worse,” said Kevin McCollum, a veteran producer with two musicals now in previews, “Mrs. Doubtfire” and “Six.” “We’re seeing more tickets being bought locally than internationally, but the Broadway theatergoer is a resilient person who wants to remain curious about the world, and that’s what we do best.”

Stage dooring is a popular activity for theater fans, who often gather there seeking autographs, selfies and conversation with their favorite stars.

Even before the Broadway League issued its recommendation, many touring productions around the country had already banned stage dooring. “In an effort to keep the entire work space as safe as possible, NETworks has developed new safety standards for housing and travel that go far beyond anything we’ve ever seen or done in the past,” said Orin Wolf, president of the touring production company NETworks. “We have also issued a new policy temporarily suspending backstage tours and post show audience engagement at the stage door.”

On Broadway, the musical “Hadestown” announced last weekend that for the next 30 days its cast would not appear at the stage door. And multiple other shows had taken intermediate steps, eliminating all handshakes and hugs and asking performers not to touch the Playbills they were signing and only to use their own pens.

Individual actors are always free to decide what to do as they leave theaters each night, but the new guidance from the Broadway League is likely to eliminate most interactions with fans.

“This is a common sense precaution until we feel that we are past this period of concern and everyone can be safe,” said Charlotte St. Martin, the president of the Broadway League.

Mary McColl, the executive director of the Actors’ Equity Association, the labor union representing actors and stage managers, said she had urged the Broadway League to take such a step.

“Stage dooring is never required of actors, but most of them love to do it,” McColl said. “But right now being in that crowd of people is not necessarily the safest place to be, and we hope the Broadway League will take the onus off the actor on this.”

(Actors’ Equity on Tuesday also took its own step to slow the spread of the disease: It emailed an alert to its 51,000 members, urging them not to show up for auditions if they are sick. “We know this is a difficult thing to ask for many of you, but hope you will take this practice to heart as an act of solidarity,” the union said.)

With tourism in New York expected to drop significantly because of the outbreak, producers are taking steps to lure more locals to the theater. The producer Scott Rudin said Tuesday that he would offer all unsold seats to the five shows he is backing — “The Book of Mormon,” “The Lehman Trilogy,” “To Kill a Mockingbird,” “West Side Story” and “Who’s Afraid of Virginia Woolf” — for $50 at all performances from Thursday through March 29.

Ticket holders who cancel their plans because of concerns about the virus must contact whoever sold them the tickets to seek refunds or exchanges. Disney announced a flexible policy on its shows’ websites, declaring that “exchange fees are waived and refunds are available for guests holding tickets to performances through April 19, 2020.” St. Martin said her impression was that most ticket sellers were trying to be flexible with purchasers, but on social media some purchasers suggested they were having trouble getting refunds.

Of course, some tourists are sticking with their plans. Melissa Picha and her daughter Jennifer Taylor — both visiting from Texas — saw “To Kill a Mockingbird” on Sunday and, when interviewed on Tuesday, they had two more Broadway shows to go. Their four-day trip to New York was meant to celebrate Taylor’s 45th birthday, and they said they had no intention of letting the coronavirus ruin their fun.

“To me it’s just life as usual,” Taylor said. “You take your precautions, and you wash your hands, and you just keep on living.”