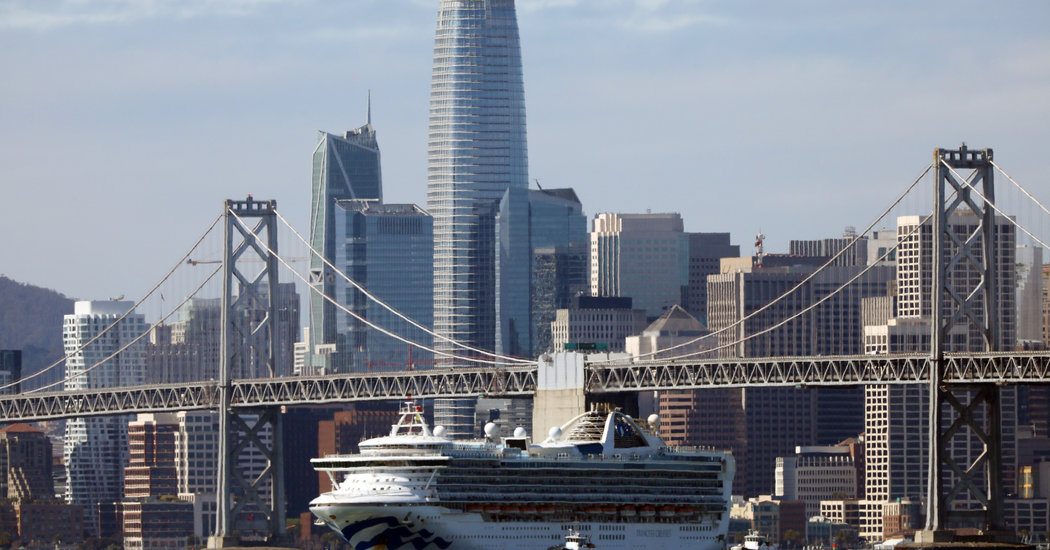 Xi Jinping traveled to the city of Wuhan today for the first time since the coronavirus outbreak began there more than two months ago, a sign that China’s government believes the worst of the national emergency is over.

Here are the latest updates on the virus and a map of where it has spread.

What to know: Here are tips on how to prepare and answers to questions about the virus. The Trump administration released several pages of guidelines on Monday.

Markets creep back after rout

Global stocks rose modestly today, and futures markets suggested that Wall Street would open higher, after the worst trading day since the 2008 financial crisis. Here are the latest market updates.

In an effort to address the economic effects of the coronavirus outbreak, President Trump said he would meet today with Republican lawmakers to discuss a payroll tax cut and legislation to protect hourly wage earners who may have to miss work because of the virus.

Related: After Saudi Arabia cut oil prices, producers in the U.S. and elsewhere are bracing for job losses.

What to know: If your long-term financial goals haven’t changed, your investments probably shouldn’t. Even for recent retirees, a portfolio with a healthy dose of stocks provides the best chance you won’t run out of money.

Go deeper: The investor Warren Buffett once warned: “It’s only when the tide goes out that you learn who’s been swimming naked.” With that advice in mind, our financial columnist James B. Stewart explains why the coronavirus poses a real test to the financial system.

Michigan is the day’s big prize for Democrats

The state is one of six holding nominating contests today, along with Idaho, Mississippi, Missouri, North Dakota and Washington.

Four years after Senator Bernie Sanders won Michigan in an upset, he is again counting on working-class voters to deliver him a victory. But former Vice President Joe Biden is leading every public poll by double digits.

The details: The first results are expected around 8 p.m. Eastern. The Times will have live coverage.

Closer look: Our reporters spoke with some of Mr. Sanders’s supporters, who believe the only way to create a fair economy is to drastically change the current one.

“The Daily”: Today’s episode is about Senator Elizabeth Warren’s campaign.

‘They were an extraordinary group’

Since then, the victims’ families have called for more scrutiny of the jet, pressed for an overhaul to aviation laws and confronted Boeing executives. Many of them will gather today at a memorial service in Ethiopia.

On Monday, Ethiopian investigators said design flaws in the plane caused the crash. A Boeing spokesman said the company continued “to extend our heartfelt sympathies to the families and loved ones of Ethiopian Airlines Flight 302.”

U.S. military review: Officials said they were evaluating how their forces conduct missions in Iraq and Syria after the deaths of two U.S. Special Operations troops in northern Iraq.

Dueling oaths: Both President Ashraf Ghani and his chief rival, Abdullah Abdullah, took the oath of office as the president of Afghanistan, plunging the country into a new crisis during sensitive peace talks with the Taliban.

Yoga in Alabama: State lawmakers are considering lifting a 1993 ban on yoga in public schools, but some critics say it’s an inherently religious, and “non-Christian,” practice.

Snapshot: Above, Prince Harry and his wife, Meghan, in London on Monday, before a ceremony honoring the British Commonwealth. It was their final official engagement before they begin life as semi-royals in Canada.

Late-night comedy: At a news conference on the coronavirus last week, President Trump said he had natural scientific ability, noting that his uncle had been a professor at M.I.T. Seth Meyers said, “People don’t just automatically know what their uncles know, otherwise we would all know the lyrics to every Steely Dan song.”

What we’re listening to: This Radiolab podcast about a reporter, Latif Nasser, who discovers a Guantánamo Bay detainee with the same name. “The show takes you on a wild journey to Morocco, Sudan and inside the barbed-wire U.S. military prison in Cuba,” says Alisha Haridasani Gupta, who writes In Her Words.

Cook: Our Food editor, Sam Sifton, calls this smothered chicken “the culinary equivalent of a weighted blanket and a nap on the couch: safe and homey.” Sign up for his newsletter.

Watch: Max von Sydow, who starred in “The Seventh Seal” and “The Exorcist,” died on Sunday at 90. Here’s where to stream 13 of his best films.

Listen: A fictitious Kevin Bacon (played by the real one), an improvised space opera and a Midwestern gothic horror story are among the new podcasts we recommend.

Smarter Living: If no one at work seems to read your emails, here are eight ways to change that.

Our Istanbul bureau chief, Carlotta Gall, is covering a tense moment in Syria’s nine-year civil war, as government forces backed by Russian warplanes have been closing in on the country’s last rebel-held city. She told Mike Ives, of the Briefings team, about what it’s like there.

Did your latest trip to Syria feel more risky than previous ones?

But I saw that the Syrians around us were very nervous when we received radio reports that Russian warplanes were in the sky. They have learned that Russian jets are extremely dangerous and unleash devastatingly powerful bombs, and they seem to target civilian areas frequently, especially hospitals, schools and markets.

The most powerful quote in your piece — “The only choice is to wait for death” — comes from a woman who had previously fled to Idlib city and then settled in a nearby town. It was relayed by her son Hikmat al-Khatib, an orthopedic surgeon. What’s his story?

Times journalists are on the ground in nearly 160 countries, covering the world — and the forces that shape it. You can support their efforts by subscribing today.

P.S.
• We’re listening to “The Daily.” Today’s episode is about Elizabeth Warren’s presidential campaign.
• Here’s today’s Mini Crossword, and a clue: Air Jordans, e.g. (five letters). You can find all our puzzles here.
• Two of our journalists described the harrowing experience of reporting on a wealthy Canadian playboy who was accused of sexually abusing poor teenage girls in the Bahamas.