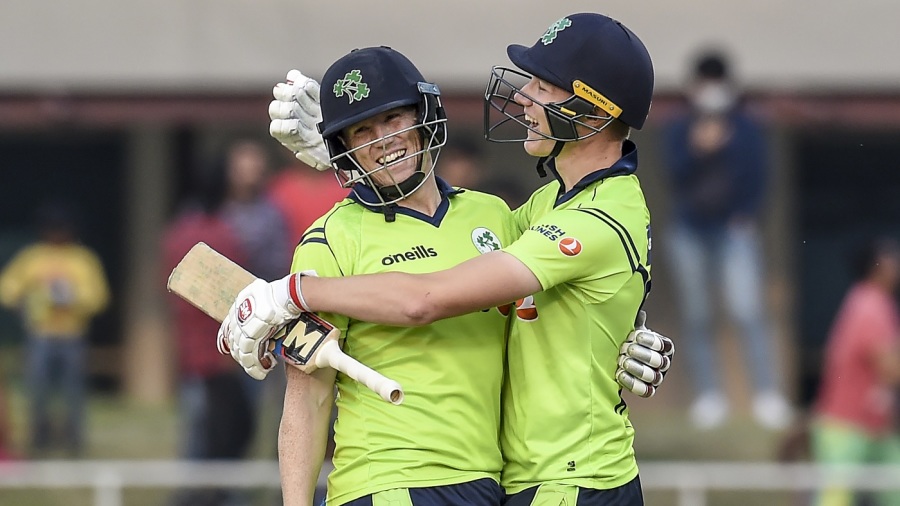 Kevin O’Brien smashed Rashid Khan for a six on the last ball of the Super Over to give Ireland their first win over Afghanistan in last 13 T20Is in the third and final match of the series in Greater Noida.

After Craig Young restricted Afghanistan to eight, Paul Stirling hit a four off the second ball, reducing the equation to four required from four balls. Rashid got Stirling lbw on the next delivery and conceded just one from the next two to make it five needed from the last ball. But O’Brien sealed the game to give his side a consolation win.

It was Rashid who had earlier helped Afghanistan tie the match in regular time. Afghanistan needed 16 from the final over and then 13 from the last three balls but Josh Little bowled two wides either side of a Rashid six. With five needed from last delivery, Rashid scythed the attempted wide yorker over covers to level the scores.

Afghanistan, though, had only themselves to blame to be in such a situation. Rahmanullah Gurbaz gave them another brisk start with a 29-ball 42, and at one stage, they needed 52 from 48 balls with eight wickets in hand. Then, Barry McCarthy bowled Karim Janat but it was Simi Singh who turned the game around by dismissing Mohammad Nabi and Najibullah Zadran off successive balls in the 15th over.

Unlike the last game, Asghar Afghan struggled for the timing and could manage only 32 off 30 balls before getting out in the final over. Rashid helped them tie the scores but couldn’t fetch them the victory in the Super Over.

Earlier, Naveen-ul-Haq and debutant legspinner Qais Ahmad picked up three wickets each to restrict Ireland to 142 for 8. Naveen sent back Stirling and Andy Balbirnie in his first two overs but O’Brien and Gareth Delany added 62 in 6.5 overs to revive the innings. Ahmad broke the stand by dismissing O’Brien for 26 off 21. In the next over, Rashid dealt Ireland another blow by getting rid of Delany, who struck 37 off 29.

That put the brakes on the scoring rate and despite Harry Tector’s 22-ball 31, Ireland could manage only 40 from the last seven overs. But what looked like a well below-par total at the innings break proved just enough in the end.