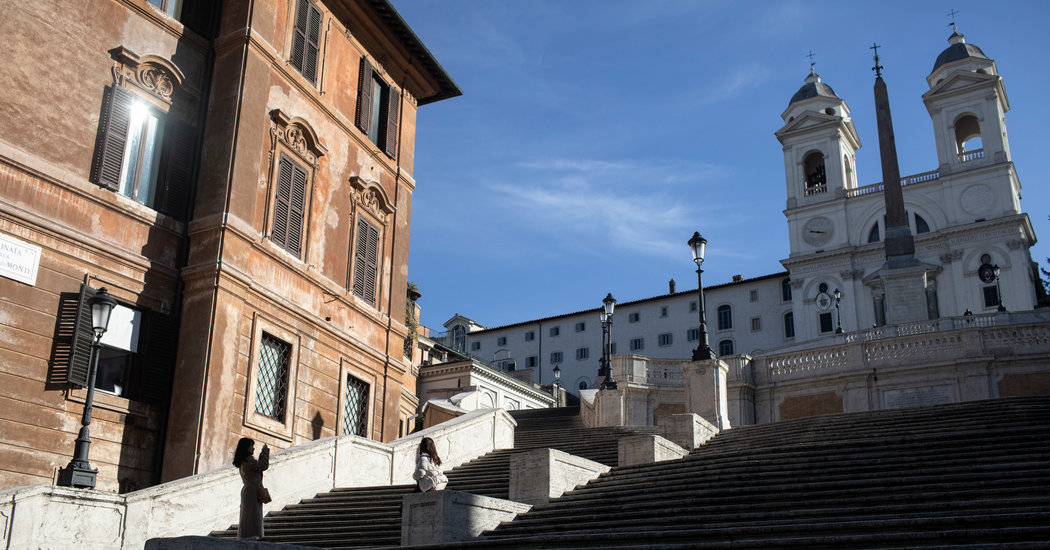 ROME — Italy got the message.

On the first day of Europe’s first nationwide restriction on movement and public gatherings to stem the rampant spread of the coronavirus, Italians steered clear of their streets, shops, churches and soccer fields.

They obeyed the government’s “I Stay Home” decree, announced on Monday night by Prime Minister Giuseppe Conte with a plea for common sacrifice to safeguard the country’s elderly population and to save the health system from collapse.

But even as Italians stayed inside, officials in the country’s north, the front line of the outbreak, pleaded for still stronger measures that would essentially shut down all commercial activity and public transportation in an effort to suffocate the contagion.

It was “time for firmness,” said Attilio Fontana, the governor of the Lombardy region, which is home to Milan and many of the most infected towns. Officials suggested the total shutdown could last for two weeks, and a spokesman for Mr. Fontana said he hoped the request would be approved by the government in Rome “as soon as possible.”

Already though, Italians had taken to their battle stations, and their couches, to fight the virus’s spread.

In Rome, water cascaded out of the usually mobbed Trevi Fountain, but there was no one around to see it. Hardly a soul moved through St. Peter’s Basilica, and the government instructed tourists to go back home or to their hotels. People lined up outside supermarkets, where only a few shoppers were allowed in at a time so that the decree’s social distance rules could be observed.

It was not an absolute lockdown. Although people were told to avoid leaving home, they could still move around for work, groceries and essentials (like light bulbs, the government said), and for reasons having to do with health, child or senior care.

But uniformed police and soldiers set up checkpoints around the country and required the people they stopped to fill out official forms and explain their movements, which the authorities could later verify. Lying on the forms is a crime.

Standing next to a police checkpoint at the Bologna train station, Valentina Scicolone, 30, called the situation “surreal.”

She had come to see her boyfriend, but was now waiting for a train to Milan, where she had to help oversee renovations at the hotel where she works. It has closed because of all the recent cancellations.

Ms. Scicolone was aware that the government had stipulated that romance was not a valid reason for travel and so wasn’t sure when she’d be able to come back to Bologna and be with her intended.

Some older Italians said the streets had a wartime feel. Every day at 6 p.m., health and civil protection officials step out in front of national cameras and update the country on the number of infections (10,149 as of Tuesday night) and deaths (631, up 168 from the day before), a ritual that has added to the sense of calamity.

A doctor in a hospital in the Lombardy city of Bergamo posted on social media a graphic account of the stress on the health system by the overwhelming number of patients. It was republished Tuesday in Italy’s largest newspaper, Corriere della Sera.

“The war has literally exploded and battles are uninterrupted day and night,” the doctor, Daniele Macchini wrote, calling the situation an “epidemiological disaster” that has “overwhelmed” the doctors.

“One after the other, these unfortunate people come to the emergency room,” he wrote. “They have far from the complications of a flu. Let’s stop saying it’s a bad flu.”

Matteo Renzi, a former prime minister, said in an interview that the virus had 10 days of a head start on the government, and that sweeping measures like the government’s decree were necessary to save all of Europe.

“Today the red zone is Italy,” he said. But in 10 days, he said, it will be Madrid, Paris and Berlin.

Italy needs to show how to stop it, Mr. Renzi said, or if not, “The red zone will be Europe.”

Luca Zaia, the governor of Veneto, which includes Venice and other cities affected by the outbreak, agreed with his political allies in Lombardy in urging stricter measures. He said that to stop the virus and save the public health system, more draconian measures, including a “total closure,” were preferable to “drawing out the agony.”

In the Veneto town of Verona, where the usually busy area outside the ancient arena was empty, two long-lost childhood friends were having a teary reconnection on Tuesday, after decades of searching for each other. But they could not hug.

“We have to respect the rules,” said Anna Burro, 56, as she stood close, but not too close, to her friend.

She, too, thought the government should shut everything down, and worried that half-measures would let the nation’s wound fester.

On Sunday, Italy imposed movement restrictions in just the north. When he announced them, Prime Minister Conte appealed to Italians not to try and be sneaky and get around the rules.

Prominent politicians, and virologists, urged Mr. Conte to make the stakes clearer with blanket restrictions across the entire peninsula. When he did so, he explained the new measures at prime time, rather than at 2 a.m. The government also made an effort to spell out more clearly what Italians could and could not do, in “FAQ” form.

In Milan, which already seemed a shell of its former vibrant self, the drop-off in activity was dramatic.

In Rome, people wore masks and latex gloves, even as they jogged by quiet streets in the Monteverde section of the city. They shed their nonchalance and holed up with a sense of mission. With schools canceled until April 3, some parents taught their children at home.

At the Salsamenteria Ruggeri, a man in a butcher’s apron and white mask limited the number of customers in the shop at a time.

“People are frightened,” said Nadia Bucciarelli, a salesclerk at the venerable chocolatier Moriondo & Gariglio. “Rightly so.”

The people who did walk around were tourists. And the government clearly didn’t want them to.

Tourism “should be avoided,” the government’s decree said, and the movements of tourists should be limited “to going back to their own home, habitation or domicile.”

By the Pantheon in the center of Rome, a sign next to the closed door suggested that tourists download an app about the monument instead. Priests at the Church of St. Ignatius drained the holy water basin next to the entrance. At the Via dei Condotti near the Spanish Steps, the luxury stores were open but there was hardly anyone to go in them.

Almost alone among them, Armani, based in Milan, stayed closed to help “safeguard the health” of the public.

“It’s going terribly,” said Orgest Doja, as he tried to entice diners into a restaurant in Piazza Navonna.

At a restaurant in Trastevere, Michelle Dejour, 49, a Danish tourist, drank coffee at one end of the table while her husband sipped white wine at the other. “The waiter asked us to do this,” she said.

Some workers who were forced into contact with people were not pleased, seeing class privilege in the pleas from Italian celebrities to stay at home.

“You stay home because you can afford it,” said Andrea Arcangeli, 41, a cabdriver who observed that Rome had become a desert. He complained that shops had closed not because they had been ordered to but because “no one is out.”

And that was precisely the idea.