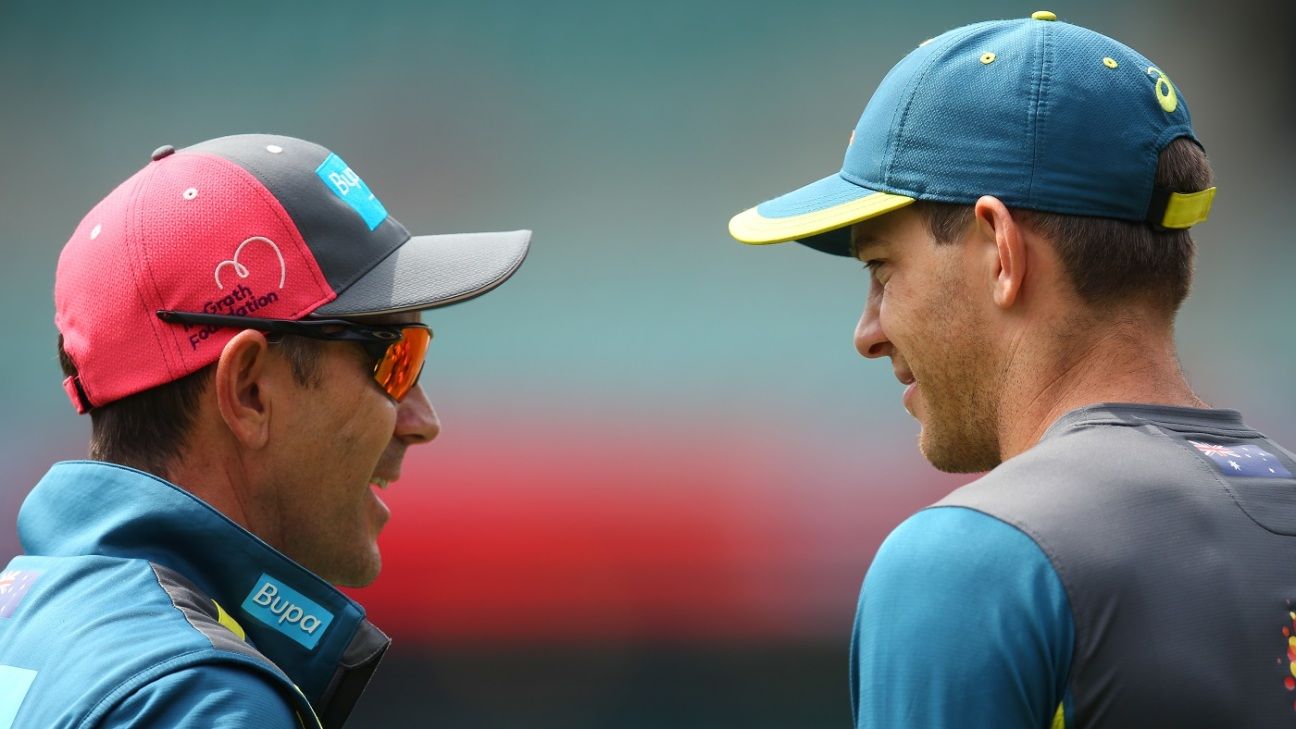 Australia’s Test captain Tim Paine was called to account by coach Justin Langer for his leadership mistakes during the frenzied final hour of the Headingley Test in front of the rest of the team, and the footage will be aired as part of a deep dive documentary on the national side’s 16 months after the Newlands scandal.

Paine, who is also shown delivering a blunt but rousing message to the team in the dressing room in the minutes after the one-wicket loss to England that threatened to derail their bid to retain the Ashes, is challenged by his close ally Langer about the singles made available to Ben Stokes as he charged towards an extraordinary result in Leeds.

Langer and team analyst Dene Hills had forced the touring squad to review footage of the dramatic defeat the morning after it as a way of ensuring it would not be allowed to fester as an issue, something the coach has previously attributed to advice from the former Adelaide Crows AFL coach Don Pyke, who had admitted he waited too long to debrief his side after the 2017 Grand Final loss to Richmond.

The decision to do so and the confrontation between Langer and Paine is one of numerous raw moments captured by the documentary series, The Test, to be available on Amazon Prime from March 12. It chronicles the long road from the Newlands scandal to the retention of the Ashes at Old Trafford last September, but is never more revealing than when Paine first speaks to a stunned and silent dressing room in the minutes after Stokes has delivered England their miracle.

“Even as someone who knew what was going to be in it, it was fascinating for me to sit back and watch. There were times where I was watching it with just sheer joy and there were others when I literally felt like I was going to cry”

“I’ll go and do media now boys, but I just want to say f*** that’s going to f***en hurt a lot, no doubt, the next couple of days. However, as I said to a few of you out there, we’ve still got two Test matches,” Paine says to the dressing room. “So let this f***en sting, we had our chances to win that game and we f***ed it up. S*** happens, we can talk about that another time.

“We’ve got two Test matches, we’ve got a bit of time off, let’s take time, stick together, keep knowing that the process we’ve got in place to beat these blokes is going to work. So it’s not game over, it’s not toys out of the cot, it’s a game of cricket, s*** f***ing happens. Yep, it was f***ing important, and we wanted it, we should have f***ing won it. Let’s move on, and start getting our heads around winning the next two f***ing Tests.”

Paine walked straight from that address to his post-match press conference, where he explained, in part, why he had not brought the field up to deny Stokes the opportunity to farm the strike with Jack Leach at the other end. “If we didn’t it probably would have finished a lot earlier, the way he was hitting them, to be honest,” he said. “It’s one of those things. It is a really difficult period of time to captain. I don’t think anyone has done it perfectly. I certainly didn’t. I don’t claim to have. But when a guy is going like that, you bring the field up he’s hitting them for four or six anyway.”

Langer, meanwhile, is shown to be critical of the field settings as the Stokes-Leach partnership is unfolding, and clearly has them in mind when he calls a still forlorn Australian squad into the boardroom of the Leeds Marriott Hotel the following morning.

There are plenty of glum faces as the tape is rolled, as the likes of Nathan Lyon and Marcus Harris struggle to watch. After Stokes is seen coshing the winning runs, the following exchange ensues. “Hard to watch, hard to watch but it is what it is,” Langer says. “The only thing I will say, there was an opportunity in my opinion with 71 to go, last ball of the over. If we’re reading the play, there is no way there can be a run there. We want six balls at Leach, right, we’ve got to squeeze in on them, we can’t give an easy run like that.”

Paine replies: “If he wanted to sweep from wide out of rough, we thought that it was actually a chance to get him out.”

Langer: “Were our plans clear enough to Stokes, do you reckon?”

Paine: “We know, we could’ve changed the fields, we could’ve bowled more bouncers. We had blokes coming on saying ‘bowl slower balls’. Hoff [Josh Hazlewood] bowled him three slower balls and he hit them for three sixes. So 100% we could do things slightly differently. We didn’t panic, we didn’t s*** ourselves, we tried our best, we had a crack, the bloke had a day out. Absolutely I’ve been awake all night, I’ve changed the field a hundred times, I think we all have, but we didn’t.”

Langer: “The question is, when we’re under that pressure, we know that were we really clear on what the plan was.”

Hazlewood chimes in: “Plans were really clear, Painey came up at the start of the over, said let’s try some slower balls and try to go wide, probably wasn’t wide enough on occasions, and I tried a yorker, just missed.”

Langer: “He’s faced 220 balls by now, and we’ve got Leach who’s come in, you want Patto [James Pattinson] to have six balls at Leach surely. The opportunity missed there, is that we let him have a single. That’s just intent, that’s just game awareness, which we all talk about.”

Paine: “I was sort of umming and ahhing, ‘f*** well if we get one or two at Leach, Patto can hit him on the toe … but the percentage play will now be to bring the field up. Balls five or six we should have had the field up when we had 60 or 70, played it simple, seen that. Got it wrong.”

The documentary format is to broadcast numerous similarly confronting moments from team meetings or training sessions, followed by commentary from the players concerned. Of the Headingley debrief, Langer says: “After it, Painey says to me, ‘mate, I found that really confronting, because I had to admit that I made some mistakes’. And I said, ‘that’s not a weakness, mate, that’s a strength, because we’re all human, and it’s good to admit weakness or vulnerability in front of your mates’, because then they’ll go ‘oh yeah so we actually did make some mistakes’.”

The documentary was launched in Sydney on Tuesday evening, and both Paine and Langer have spoken of their own reactions to it: alongside limited-overs captain Aaron Finch and vice-captain Pat Cummins, they formed a committee that reviewed each episode of the series, directed by Adrian Brown.

“Even as someone who knew what was going to be in it, it was fascinating for me to sit back and watch,” Paine told RSN Radio last week. “There were times where I was watching it with just sheer joy and there were others when I literally felt like I was going to cry.”

Langer, meanwhile, has admitted the openness of the documentary was difficult for him to watch at times. “It’s very confronting,” Langer said. “But it is what it is, that’s what actually happens in the Australian cricket team. I’ll be fascinated how the public reacts to it, I hope they enjoy it. Looking back on it after 18 months, I’ve spoken very publicly about the first six months of the job and how hard it was. To watch that, I was getting sweaty under my tracksuit every time I watched it. But looking back, that’s actually what happened.”