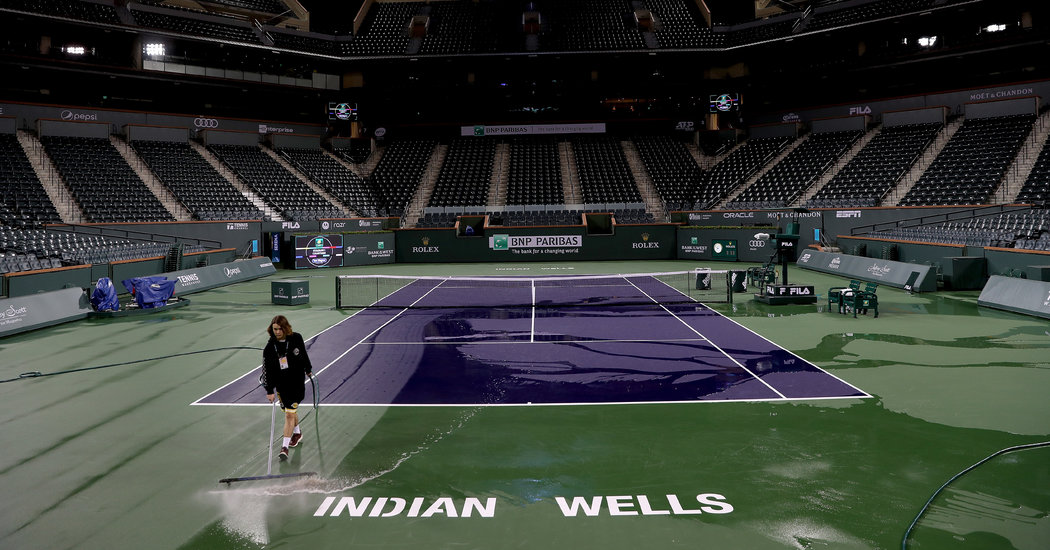 INDIAN WELLS, Calif. — The BNP Paribas Open in Southern California attracts nearly a half-million fans each year. It is one of the top five events on the international tennis calendar.

So when organizers of the event known as “Indian Wells” decided on Sunday to cancel the two-week tournament that had been scheduled to start Wednesday, a new reality descended across the world of sports and entertainment: Every event in the coming weeks, no matter how big, could be in jeopardy.

“If Indian Wells cancels, that is a real sign we’re in a serious situation,” said Donald Dell, the longtime sports promoter and agent.

Indian Wells joined a growing list of events in sports, entertainment and commerce that have been canceled over fears of coronavirus, which has been blamed for nearly 4,000 deaths worldwide and infected more than 100,000 people since its outbreak in Asia earlier this year. South by Southwest, the music festival and corporate conference in Austin, Texas; Alpine skiing’s season-ending World Cup races in Italy; and even the TED2020 conference scheduled for Vancouver, British Columbia, in April, all have been canceled in recent days.

Medical experts remain divided over the benefit of canceling mass events in locations that are not hot spots for the virus, or whether the people who might have attended these events are any safer simply going through their everyday lives, especially those who live in major metropolitan areas.

Yet there was little doubt Monday that the cancellation of Indian Wells, a tournament owned by the billionaire Larry Ellison, was a major development.

“I think they did everything they could, but all of a sudden the situation changed overnight, which is unfortunate,” Kristi Ahn, a member of the Women’s Tennis Association’s player council, said of tournament officials for Indian Wells. Ahn had received a wild card to play at Indian Wells. “We can’t be mad at them for what, I think, is ultimately the right decision.”

For now, other sports have avoided canceling games, but on Monday night the four major American sports leagues currently in season — the N.B.A., the N.H.L., Major League Baseball and Major League Soccer — announced that they would restrict access to team locker rooms and clubhouses to “only players and essential employees of teams and team facilities until further notice.”

The N.B.A. scheduled a conference call with team health care officials for Monday night to discuss a series of new precautions, including limiting the number of people who interact directly with players each day. A confidential memo recently circulated to the league’s teams did not mention canceling games, but last week N.B.A. Commissioner Adam Silver told teams to prepare for playing games without fans in its arenas.

Russ Granik, the former deputy commissioner of the N.B.A., said the league had confronted a similar period of concern about the safety of attending games after the Sept. 11 terrorist attacks. In that case, however, the N.B.A. had nearly two months to prepare for the start of its season, and the response was fairly obvious — work with the government and law enforcement experts to make arenas more secure by screening the people as they entered.

Making arenas a place where fans can feel safe from a complex, invisible virus is thornier.

“This is spreading and nobody knows exactly how and to what effect,” Granik said. “This is a much grayer problem at the moment.”

For the organizers of any major upcoming match, or tournament or race, using the term “fluid situation” has the become the most common way to describe whether an event will take place. The sports and entertainment calendar in the coming weeks includes the annual N.C.A.A. men’s and women’s basketball tournaments; the Coachella Valley Music and Arts Festival in Indio, Calif.; the Masters golf championship; and the Boston Marathon.

“Each event is going to be judged on its own, depending on where it is located and what the situation is at that particular moment in time,” said Michael Payne, the former chief marketing officer of the International Olympic Committee and a longtime consultant to major sport organizations. “Four weeks ago Italy was not a problem. Eight weeks from now it might not be. But it is now.”

As New York entered its second day in a state of emergency, leaders of the New York Road Runners were discussing with city officials whether to go forward with the New York City Half Marathon scheduled for this weekend. The race, which runs along the city’s streets from Prospect Park in Brooklyn to Central Park in Manhattan, has 25,000 participants and is among the largest events the organization stages.

“We are going to make our best judgment very shortly on that,” Mayor Bill de Blasio said. “At this point, I don’t see a reason to cancel. That can change at any point.”

After canceling their tennis tournament, organizers in Indian Wells moved swiftly to accommodate players, many of whom — including Venus Williams, Rafael Nadal and Dominic Thiem, last year’s men’s singles champion — had already arrived in California. Players originally in the main draw in singles and doubles and in the qualifying event in singles were guaranteed complimentary hotel rooms, access to practice courts and medical and laundry service through March 16.

Ahn said she practiced Monday afternoon with the Taiwanese player Hsieh Su-wei before attending a WTA council meeting aimed at sorting out the effect of the tournament’s cancellation on matters like players’ ranking points and prize money distribution. She said she couldn’t help but be struck by such an uncharacteristic vibe at a tournament “all the players really look forward to.”

“It’s quiet,” Ahn said. “And the morale was pretty low. A lot of people are shocked. Some were angry.”

Jean-Christophe Faurel, a coach for the tennis star Coco Gauff, described the mood of the players and coaches as “shocked.”

“Coco opened the door of the car and said, ‘I have some bad news,’” Faurel said in a telephone interview. Gauff’s team went to dinner, and no one spoke for a while, Faurel said. Then they began wondering about the biggest question.

“What happens to the upcoming tournaments?” Faurel said. “When you see this canceled, you start to think that everything is going to be canceled for the next couple of months. There are cases of coronavirus everywhere.”

The Miami Open, another big tennis tournament, is scheduled to begin at the end of March. After that, the spring schedule reads like a tour of some of the European hot spots for the coronavirus: clay court tournaments in Madrid and Rome, then the French Open at Roland Garros in Paris.

In a statement, a spokesman for the Miami Open said Monday the tournament was moving forward as scheduled.

The ATP also recommended that its players remain in the United States if they intended to play in the Miami Open in order to avoid any quarantines brought about by leaving and then re-entering the country. If the Miami Open is played, it is expected to enact restrictions similar to those Indian Wells initially had announced, such as barring ball kids from touching player towels and limiting contact between players and fans. It might be possible to stage the event without spectators: an option Indian Wells and Ellison rejected but one that IMG, the owners of the Miami Open, could accept.

“Safety remains a top priority,” the Miami Open spokesman said. “We are working with the ATP and WTA tours on recommended best practices and following C.D.C. guidelines closely to provide a safe environment for fans, players and staff.”

Numerous players remained at Indian Wells on Monday searching for answers. Mitchell Krueger, ranked 194th in the world, played in a smaller event at the site last week, and earned a spot in the main draw at Indian Wells.

“To go from the high of getting a wild card into a Masters series event — which doesn’t happen every day for someone with my ranking — to not playing just like that is tough,” Krueger said. “I don’t want to say it’s completely unexpected, because we are obviously all following what’s happening around the world. But I was on site Sunday afternoon and there was no indication this was even being considered.”

On Monday, he wondered about the fate of his prize money (a minimum of $18,155 for making the main draw) and directions on when the tour schedule would resume.

Andrea Gaudenzi, the new ATP chairman and a former top 20 player, said in his organization’s first statement on the cancellation that “the ATP Tour calendar beyond Indian Wells remains as status quo.”

Absent a government ruling prohibiting mass events, Granik said, the public may have the most to say about which events happen.

“I suspect this is going to be more about what your fan base is thinking,” he said. “If substantial numbers of people are going to stay away from something, then that might make it hard for whoever is in charge to push forward.”