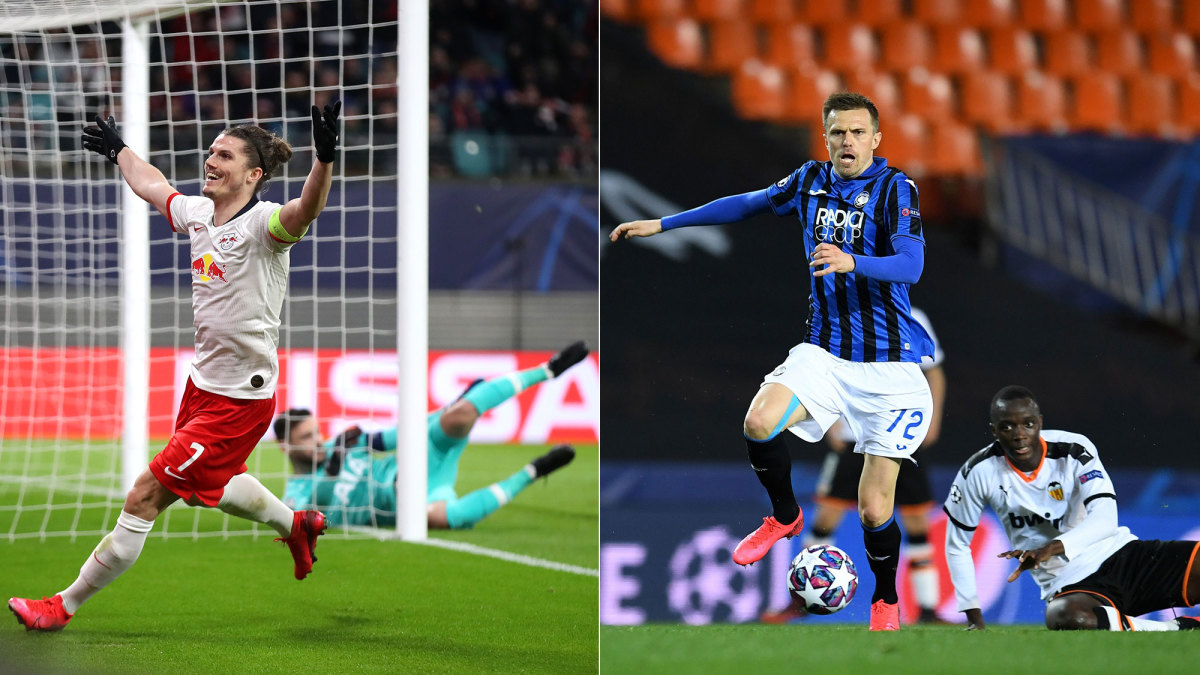 The two knockout phase debutants both made it through to the Champions League quarterfinals on Tuesday. RB Leipzig completed its victory over last season’s runner-up, Tottenham, while Atalanta never looked like surrendering its 4-1 first-leg advantage against Valencia in an empty stadium.

Two goals in the first 21 minutes from Marcel Sabitzer effectively sealed Leipzig’s progress, as it extended its 1-0 first-leg advantage to 3-0. Emil Forsberg made it 3-0 on the night, 4-0 on aggregate, with four minutes to go.

In Spain, where the coronavirus outbreak has forced matches behind closed doors, Josip Ilicic scored four goals for Atalanta as Gian Piero Gasperini’s side beat Valencia 4-3 on the day for an 8-4 aggregate win. An Ilicic penalty after three minutes cancelled out Valencia’s away goal almost immediately. Kevin Gameiro leveled, but another Ilicic penalty gave the away side a halftime lead.

Gameiro equalized again and Ferran Torres chipped Valencia into the lead, but a crisp Ilicic drive from the edge of the box leveled the score on the night, and he added the fourth after a slick move with nine minutes remaining to secure Atalanta’s passage.

Here are three thoughts as the first two teams punch their tickets to the Champions League quarterfinals:

How far can Leipzig go?

To call it a classic fairytale would perhaps be misleading–unless you think Sleeping Beauty was awoken not by the soft kiss of her handsome prince but by a glug of a popular energy drink–but modern football is in no position to be picky, and anything that breaks the domination of the superclubs counts as romance. But could Leipzig do it? Could it actually win the Champions League?

On the evidence of the last 16 so far, there is no reason why not. Barcelona, Real Madrid and Juventus are as weak as they’ve been for years. Paris Saint-Germain has shown no signs of learning how to play top-level European football. Manchester City has defensive issues. Liverpool is not playing as well as it was two months ago. This feels like one of those seasons when at outsider could break through–and why not Leipzig?

Julian Nagelsmann’s side is well-organized and attacks with pace and directness. If it got a little fortunate Tuesday, scoring twice early on, it could reflect that it should have won far more comfortably than the 1-0 first-leg result in London. Leipzig’s first goal arrived after 10 minutes after a start in which it had appeared a little anxious. Timo Werner’s initial shot was blocked, but he was able to work the ball to Sabitzer, whose low shot probably should have been saved by Hugo Lloris. As it was, although the Spurs keeper got a hand to the ball, he was unable to divert it around the post.

Lloris got his hand to the second as well, but given the pace on Sabitzer’s header as he met Angelino’s left-wing cross, that was perhaps more forgivable. Serge Aurier was also badly at fault as the ball was swung out to the Leipzig left, and it was notable, as it was in the first leg, how relentlessly Leipzig targeted the space behind the fullbacks. Angelino was the source of the third as well, beating Aurier and sending in a low cross that Emil Forsberg ended up converting after a couple of half-blocks.

Atalanta will entertain at any and all costs

Atalanta is the top-scoring team in Serie A, but it has also leaked 34 goals in 25 league games this season. Its openness, surely, will prevent it from seriously challenging for the Champions League title, but it has the attacking quality to unnerve any opponent, not least because its attacking intent seems so absurdly exaggerated.

Take its third goal Tuesday: it led 6-4 on aggregate. It had an away goals advantage. There was no need for it to do anything other than kill the game, but instead it overcommitted on a corner, leading to a Valencia counterattack–which it was then able to counter against.

Gasperini is fundamentalist in his faith in attacking: if nothing else Atalanta is fun.

Where does Tottenham go from here?

As anybody who has heard Jose Mourinho speak in the past couple of months will know, Tottenham is suffering with injuries. To lose Harry Kane was bad enough, but that has been compounded recently by the loss of Son Heung-min and then Steven Bergwijn. But this is Tottenham. It has other forwards, players of the class of Dele Alli, Lucas Moura, Erik Lamela and Giovani Lo Celso. It has Troy Parrott, who has been playing brilliantly for Ireland’s Under-21s. Besides which, Mourinho’s job is surely to try to find solutions rather than constantly to bemoan his fate and insist winning with the players available is impossible.

Tottenham has now gone six games without a win. It’s out of the Champions League and FA Cup and is down to eighth in the league. The assumption was that there would be belated restructuring of the squad in the summer–something Mauricio Pochettino had been demanding for a couple of years before his dismissal–but it now appears major surgery is required. Recent injury problems have shown the need for reinforcement of the forward line. The midfield looks stale, the defense is aging and now Lloris looks ever more fallible. The upward trajectory that ended with defeat in the Champions league final last season seems a world away.

And that’s without considering whether any of the players Spurs may wish to keep will want to stay. If the forward momentum has been checked, and if their wages remain lower than they can earn elsewhere, why would the likes of Alli, Son or even Kane want to stay? And when Mourinho is in this sort of mood, refusing to take responsibility and issuing excuses rather than finding solutions, is he really the manager Tottenham wants overseeing an expensive overhaul?