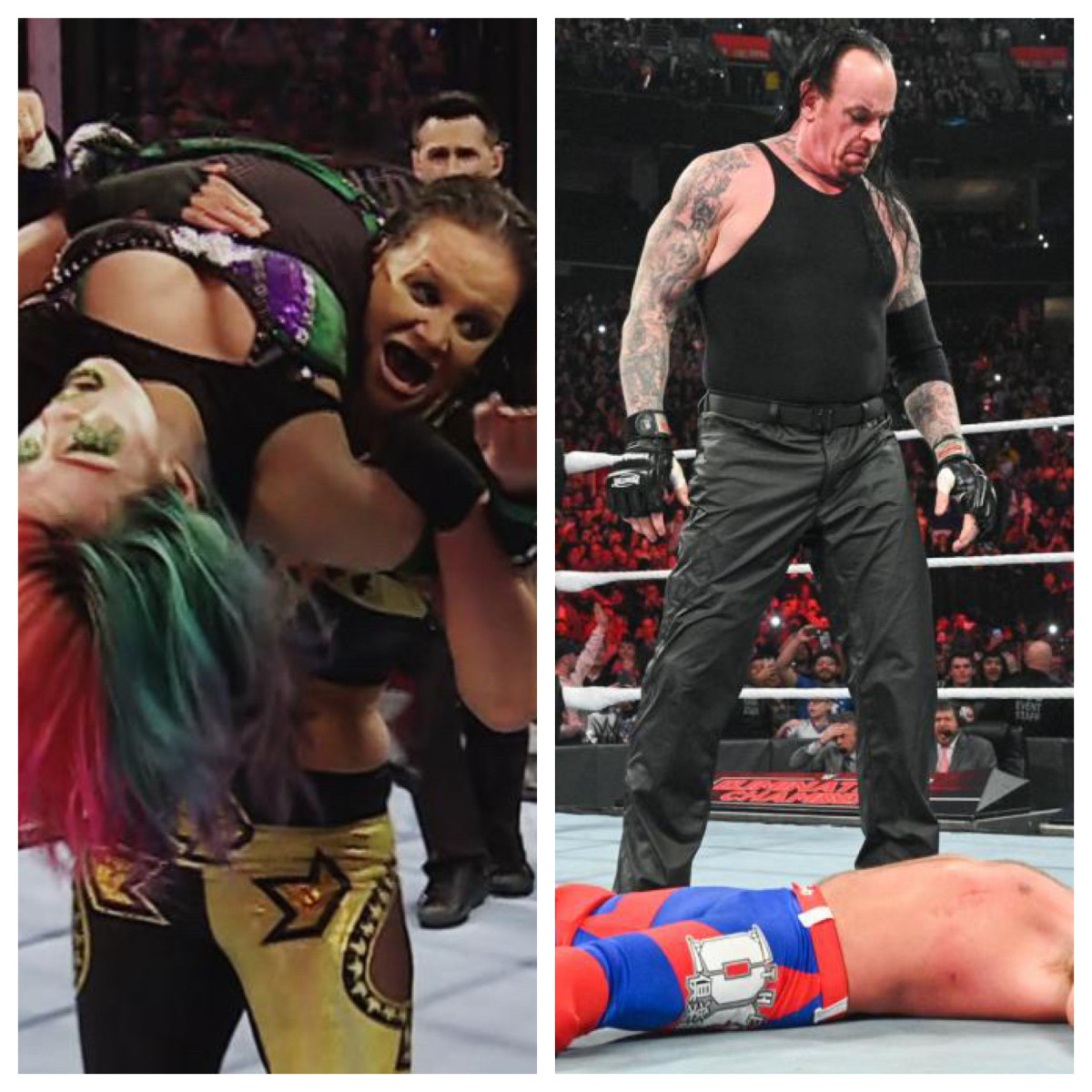 WWE’s Elimination Chamber pay-per-view provided a tremendous amount of definition for WrestleMania 36, which is rapidly approaching on April 5.

Despite a scant build to the show, the collection of talent on display at Elimination Chamber was spectacular. Serving as a reminder to the depth, versatility, and skill of WWE’s talent pool, Elimination Chamber finished with a main event dedicated to showcasing the dominance of Shayna Baszler.

Baszler wiped out all five of her opponents in the Elimination Chamber match. She’ll now challenge Becky Lynch for the Raw Women’s title at WrestleMania.

That was far from the only highlight of the show. The Undertaker returned to further ignite his feud with AJ Styles, The Miz and John Morrison retained their SmackDown tag titles in a very entertaining Elimination Chamber match and Daniel Bryan allowed Drew Gulak to be presented as every bit the star he should be in their show opener. Kevin Owens and Seth Rollins also set up their WrestleMania encounter, Sami Zayn won the Intercontinental title from Braun Strowman, and, though somewhat overshadowed by the return of The Undertaker, Aleister Black won the biggest match of his WWE career by defeating Styles.

Here are the biggest takeaways from WWE’s final pay-per-view before WrestleMania:

1. The entire Elimination Chamber pay-per-view was designed to serve as a bridge to next month’s WrestleMania, and it certainly accomplished its goal–especially in the main event.

Shayna Baszler was dominant in the Elimination Chamber match. She knocked off all five of her opponents, making quick work of Sarah Logan, Ruby Riott, Natalya Neidhart, and Liv Morgan, before using her submission skills to outmaneuver Asuka for the win.

The victory places Baszler in a match against Raw Women’s Champion Becky Lynch at WrestleMania. Although they are unlikely to headline the show, which Lynch did last year alongside Ronda Rousey and Charlotte Flair, this is an incredible opportunity for Baszler.

Despite a groan-inducing spot on Raw a few weeks ago when Baszler bit into Lynch’s neck, WWE has done a tremendous job building Baszler into a monster and allowing her to be herself on-screen. A win over Lynch at WrestleMania now becomes a necessity. Baszler needs the belt more than Lynch, and Lynch can only return to her familiar role as the underdog by dropping the belt.

2. Courtesy of his Black Mass finisher, and an assist from The Undertaker, Aleister Black defeated AJ Styles in a no-disqualification match.

With Paul Heyman directly overseeing his storylines, Black has flourished, and he looked like a star in his win against Styles. This match had multiple purposes, but one was certainly to see if Black could hang with the WWE’s elite. While it went slightly too long at 23 minutes, Black showed once again that he belongs in WWE’s top tier of stars.

Black is now in need of the right opponent for WrestleMania. The name I have heard for his WrestleMania opponent is Andrade, which would allow him to win the United States title.

As for the program between The Undertaker and Styles, I am certainly more intrigued following Elimination Chamber. This marks the second show in a row that ‘Taker dominated Styles.

With The Undertaker delivering all the punishment thus far, could WWE be setting up Styles for the win?

WrestleMania has turned into a marathon, and there will be plenty of babyfaces who win and make the crowd happy. Even if an AJ Styles win over The Undertaker disappoints a portion of the fans, it is the only option. ‘Taker would still look good in defeat, and Styles–a full-time talent largely responsible for carrying the WWE product–can carry that win with him for the entire year.

3. The Elimination Chamber match for the SmackDown tag team titles was also captivating. The Miz and John Morrison retained their titles, eliminating The Usos in the finale and likely setting up a match at WrestleMania against them in the process.

The match featured Miz and Morrison, The Usos, The New Day, Lucha House Party, Heavy Machinery, and the team of Dolph Ziggler and Robert Roode. In spite of all the moving pieces, the match was nonstop action and entertaining. Highlights included Otis blasting himself out of the pod and Lince Dorado delivering a shooting star press while swinging atop the Elimination Chamber.

WrestleMania has developed into a larger-than-life show, but not every match needs an elaborate set-up. The fan base is eager to see Otis gain revenge on Ziggler, and a Heavy Machinery-Ziggler/Roode match is a perfect change-of-pace match for ‘Mania.

Bryan defeated Gulak in the show opener, with Gulak passing out due to Bryan’s LeBell (Yes!) Lock. Bryan took some brutal falls on his neck, working as hard as he possibly could to present Gulak in a different manner. This was not a typical WWE match, but it was a first-rate display of technical wrestling and storytelling.

During his time on the main roster, Gulak has served as fodder for WWE’s stars. But Bryan instead made him look like a ruthless opponent, one with a variety of submission maneuvers.

Few stars in their prime have ever operated in such an unselfish manner as Daniel Bryan. If Bryan has his way, Gulak will win the rematch.

Zayn is an excellent choice for IC champ, which is traditionally a role for a company workhorse. WWE often books the babyface to win handicap matches, but it was good to see a more realistic story presented here.

I would pivot Strowman away from the IC title and into a singles match with Nakamura at WrestleMania, with Zayn defending the title in a separate program, perhaps even against Daniel Bryan–which was a storyline that started last fall but never amounted to much as Bryan instead went on to feud with Bray Wyatt.

6. The Street Profits retained their Raw tag titles in a win over Seth Rollins and Buddy Murphy, but the real story of the match was the build between Rollins and Kevin Owens.

Rollins-Owens would make a solid fit for the opening match at WrestleMania. Owens likely needs the win slightly more in order to elevate himself back into contention for the world title, but it is a match that could be booked either way.

The Street Profits will likely be in a multi-man tag at ‘Mania, which could include The Viking Raiders and The AOP. This, for now, leaves Murphy as the odd man out, but WrestleMania should be a show that is designed to only feature matches with well-developed storylines and significant feuds instead of a show where everyone gets on the card.

7. Even with only minimal build, Elimination Chamber did its job of providing definition for WrestleMania.

Watching Shayna Baszler dominate a pay-per view main event was a breath of fresh air, and I really hope that The Undertaker constantly being one step ahead of AJ Styles means that there will be an upset victory for Styles in their match. Daniel Bryan’s face-off with Drew Gulak was also an entertaining affair, as the consummate pro Bryan did all he could to highlight an emerging star in Gulak.

The next two weeks of Raw will feature, respectively, Edge and “Stone Cold” Steve Austin. SmackDown is slated to have return appearances by Bill Goldberg and John Cena before WrestleMania. All of this adds electricity to WWE’s build to the biggest show of the year, which was greatly benefited by a strong showing at Elimination Chamber.

— Aleister Black defeated AJ Styles in a No Disqualification match