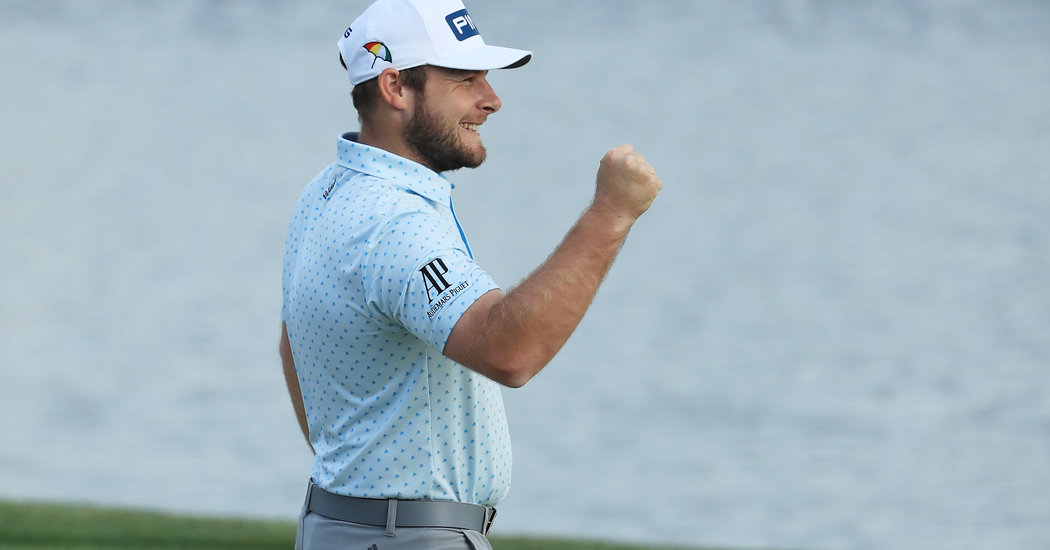 ORLANDO, Fla. — A year ago at the Arnold Palmer Invitational, Tyrrell Hatton of England hit a golf shot so crooked and so wayward that he turned to his caddie, Mick Donaghy, and asked, “Have you seen a worse golf shot?”

Captured on videotape and widely viewed on social media, the exchange had been how golf fans best knew Hatton — unless it was the video he tweeted when his fiancée, Emily Braisher, inadvertently slammed a portable toilet door during his backswing at the Italian Open, a tweet appended with the hashtag #weddingsoff. (Hatton was joking.)

But Sunday, in the final round of this year’s Arnold Palmer event, the entertaining, volatile but charismatic Hatton made his mark on the golf world in a more permanent, arguably constructive way. Resolute in windy, challenging conditions — there was only one round shot in the 60s in the final two days at Bay Hill — Hatton earned his first PGA Tour victory with a gutty, two-over-par 74 on Sunday that left him one stroke ahead of the runner-up, Marc Leishman. Hatton, a four-time winner on the European Tour, finished the tournament at four under par, a wide smile on his face and a ready quip about his notable temper.

“I was annoyed and could have easily blown up at times, but kept my head a little bit,” said Hatton, who once joked that his nickname should be Head Case Hatton. “The hardest thing for me today would be to manage myself. I did a decent job.”

Hatton’s victory over a deep field comes in only his second tournament since surgery on his right wrist in November. On Friday, when asked how he had spent his time rehabilitating from the surgery, Hatton smiled and answered: “I drank a lot of red wine and played Xbox. That was it. When the cast came off and I was told I could play Xbox, I didn’t hesitate.”

It may not be the customary regiment for a comeback, but it seems to have suited the whimsical Hatton, who entered the event 32nd in the world golf rankings. At his first tournament back, a World Golf Championship event in Mexico last month, Hatton, 28, finished in a tie for sixth.

On Sunday, in his 60th start on the PGA Tour, he held a lead heading into the final round for the first time. But his two-stroke advantage over Leishman and Rory McIlroy disappeared less than an hour after Hatton’s opening shot.

McIlroy made an early run Sunday and quickly vaulted into a tie for the lead with a birdie on the fourth hole just after a shaky bogey by Hatton on his first hole. But McIlroy, who regained the No. 1 ranking last month for the first time in five years because of consistent results, faltered badly after tying Hatton.

After Saturday’s third round, McIlroy said his primary goal in the fourth round was to avoid making a big number on any hole. But after bogeying the fifth, McIlroy’s third shot to the par-5 sixth hole rattled around a pile of rocks separating the green from a pond. Forced to take a penalty shot and a drop before his next shot, McIlroy ended up with a crushing double bogey when his seven-foot bogey putt slid past the hole.

McIlroy shot a four-over 40 on the front nine holes and never seriously threatened the leaders again, finishing with a four-over-par 76.

The back nine of the tournament would instead become a taut battle among Hatton, Leishman and Sungjae Im, the 21-year-old from South Korea who won last week’s Honda Classic. Hatton’s equilibrium was most tested after a double bogey on the 11th hole when the steadiness he had exhibited for most of the tournament seemed to vanish with one shot in the water and another over the green. Hatton said the deceiving wind gusts ruined what were otherwise good shots.

“It was frustrating,” he said.

But despite the capricious nature of the task at hand — and some less than perfect outcomes — Hatton closed with steadying pars on his final seven holes, including the par-3 17th hole and the demanding 18th hole, both of which required nerve-racking shots to greens protected by long expanses of water.

Hatton said he found the composure to execute testing shots in uneven conditions in part because his long layoff after surgery lowered his expectations. Im, meanwhile, made a late charge but stumbled with a double bogey on the 13th hole to finish in third place two strokes behind the winning score.

At the end of the day, Hatton was wearing a red cardigan, a favorite fashion choice of Palmer that is awarded to the tournament winner. He said he would remove the garment not long after leaving the Bay Hill grounds.

“I don’t want to ruin it,” Hatton said with a giggle, “and with the celebrations that will occur tonight, I think it’s best to put it on a coat hanger.”