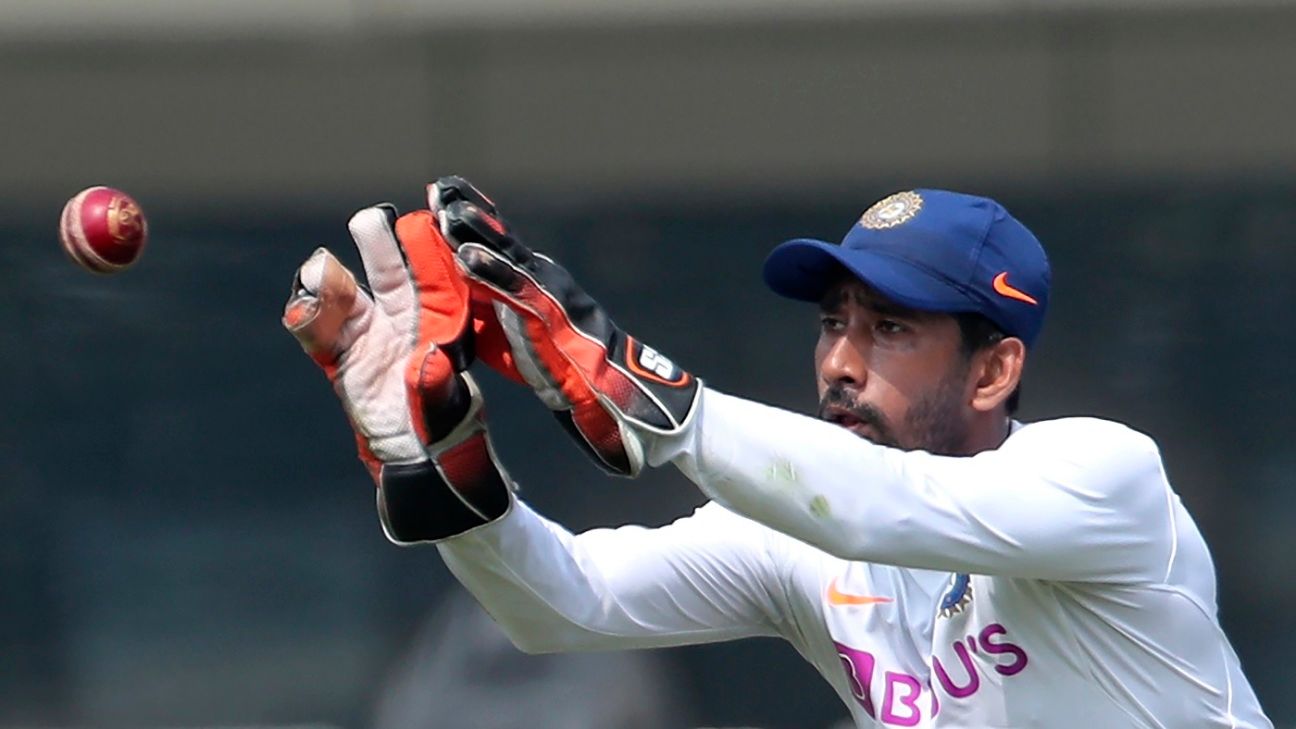 Wriddhiman Saha hasn’t played a competitive game in close to a month. His request to play for Bengal ahead of the New Zealand tour was shot down by the BCCI. Then, he played one fixture for India A and didn’t feature in the two Tests that followed. Upon return, he immediately made himself available for the final.

There was, however, the possibility of his wife giving birth to their second child around the same time. Saha reached Kolkata on Wednesday and celebrated the arrival of his son on Thursday. He took the day off on Friday and got to Rajkot from Kolkata via Ahmedabad on Saturday night.

“I’m feeling good,” Saha told reporters after training at the Saurashtra Cricket Association Stadium. “My wife told me straightaway: ‘go after a day’. But I had to have at least one day’s training before the match. This is a great chance for us, why will I miss out on the opportunity? Wife se abhi sunne ko chance nahi mila, baad mein milega (I didn’t get to hear about it from my wife, but I am sure she will remind me later).”

With such a short turnaround, Saha has had to shrug off jetlag, do daddy duty for a night and then travel ten hours, including a four-hour drive, to get to the grandest stage of them all as far as his state team is concerned: the Ranji Trophy final.

“For me, the future is now. Tomorrow. This Ranji final,” he said. “It’s simple. As a keeper, you follow the ball. It’s the same with batting. Just watch the ball. The basics are what I focus on”

“I’m lucky to get a chance to play in a Ranji final, it doesn’t come often in a career,” Saha said. “As a kid, you dream of playing here. Manoj Tiwary has played in two, this will be his third. For me, it’s the first, so I’m very excited. I treat every game with the same intensity. Not just Ranji, every game, even a club game, is important to me.”

Saha revealed there was good-natured banter between him and Cheteshwar Pujara as they followed the journey of their teams into the Ranji final while on tour with the Indian Test team. “Not just me, but Mohammed Shami also,” Saha laughed. “I was following scores and videos every day. Even Virat Kohli, Ravi Shastri, and others kept asking us about who is doing well, who is scoring runs.”

Saha also offered his perspective on what made this Bengal side different from the ones he had been a part of in the past. For starters, he said there was a lot of “hasi aur mazaak (laughter and fun)”. He also felt having a competent bowling attack helped make matters easy. For the record, no team has managed to score 250 or more against Bengal this season.

“Initially I felt the team was hinged on one or two people,” he said. “Ashok Dinda was the only fast bowler picking wickets. At the other end, we didn’t have someone to do that consistently. Now, it’s different. Also, our lower-order batting has improved, bowlers have become better batsmen. Someone is raising their hand up every game.”

Saha will be 36 by the time India’s next Test tour to Australia comes around. He was asked about the future, and what he thought of where he stood in the grand scheme of things. Instead, he offered a peek into his mindset. “For me, the future is now. Tomorrow. This Ranji final,” he said. “It’s simple. As a keeper, you follow the ball. It’s the same with batting. Just watch the ball. The basics are what I focus on.”