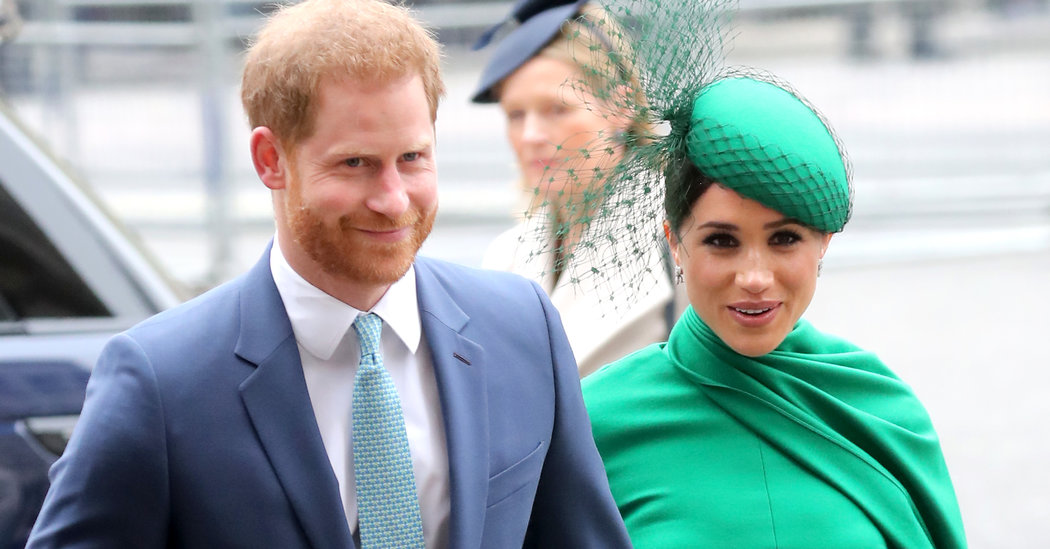 LONDON — With smiles and backward glances, Prince Harry and his wife, Meghan, took part in their final engagement on Monday, honoring the British Commonwealth at Westminster Abbey, before they decamp for one of its frontier outposts, western Canada, and an uncertain new life as semi-royals.

The choice of venue for the couple’s final appearance was laden with symbols of the life Harry is leaving behind: It is where Queen Elizabeth was crowned in 1953; where his brother, Prince William, married in 2011; and where 30 kings and queens are buried, going back to King Edward the Confessor in 1066.

Harry has busied himself with a series of appearances in recent days, including an Abbey Road recording session with the rock star Jon Bon Jovi and a travel conference in Edinburgh at which he told participants, “Just call me Harry.” Meghan paid a surprise visit to a classroom in London on Friday to mark International Women’s Day.

But as of March 31, the couple will no longer be full-time working members of the House of Windsor. They are expected to return soon to Canada, where they have left their son, Archie, in the care of a family friend.

As Queen Elizabeth and Prince Charles entered under the abbey’s vaulted ceiling, the familiar pomp was tinged with sadness over Harry and Meghan’s departure, a traumatic decision that almost ruptured the family, plunging it into the greatest crisis since the death of Harry’s mother, Princess Diana, in 1997.

The couple took their seats a row behind Prince William and his wife, Kate. But the brothers did not exchange words as the service began. Meghan curtsied and smiled as the queen walked to her chair.

Buckingham Palace headed off one potential bit of awkwardness when officials backtracked on a plan to give William and Kate a place in the queen’s procession while sending Harry and Meghan straight to their seats. Both couples ended up skipping the procession.

The order of service, as the palace’s planning document is known, was distributed to the royal press corps before it was finalized, according to palace officials. While there is precedent for senior family members not to be in the procession, some royal watchers took it as a telling moment.

If nothing else, for Harry and Meghan, the glitch served to underline the distance between their electrifying debut as a couple in late 2016 and the messy dissolution of their relationship with the House of Windsor.

The couple’s leave-taking was a wistful coda to a two-month drama that began in early January when they unexpectedly announced a plan to “step back” from their official duties, relocate for part of the year to North America and seek financial independence.

The news, communicated through their Instagram account, caught Buckingham Palace off guard, even though it came after a period of deepening internal dissent on the part of Harry and Meghan and clear public signs that the prince, and particularly his wife, were unhappy and dissatisfied their lives in the royal family.

That set off a tense negotiation between Prince Harry, the second son of Charles and Diana, and the queen over the terms of their departure from working royal status. After an extraordinary family conclave at the queen’s country residence, the queen offered the couple what amounted to a bare-bones severance package.

The couple agreed not to use their most exclusive titles, His Royal Highness and Her Royal Highness; to give up most public funding of their lifestyles; and to repay more than $3 million in state funds for the refurbishment of their official residence, Frogmore Cottage, on the grounds of Windsor Castle.

Harry remains a prince, sixth in line to the throne, and he and Meghan retained another of their titles: the duke and duchess of Sussex. But they also agreed to strip the word royal from their website and Instagram account. Those sites, which carried the brand SussexRoyal, are a key part of how the couple plan to market themselves in their commercial and charitable pursuits.

Harry and Meghan left little doubt of their resentment. They said in a statement on their site that they were being held to a different standard than other family members who wanted to work in the private sector. And they said they were under no legal obligation to stop using “royal” outside Britain, though they said they would refrain voluntarily from doing so.

The churlish tone erased any presumption that the couple had managed to reconcile with other family members. Although the queen has emphasized that she would welcome Harry and Meghan back at any time, experts on the royal family said they worried that the couple were getting bad advice from public relations consultants in the United States, which could alienate the queen.

“That was written by people on the other side of the Atlantic who don’t understand how the royal family works,” said Dickie Arbiter, who served as press secretary to the queen from 1988 to 2000.

Perhaps the only clear beneficiary of the Harry and Meghan crack-up is Prince William’s wife, the former Kate Middleton. After drawing her share of unkind tabloid headlines when she was a student dating William, she has gotten a shower of gauzy press coverage in recent weeks.

“Kate Middleton is ‘single-handedly’ carrying the Royal Family,” declared the Daily Mail last week. “Romantic Prince William gushes over wife Kate Middleton and tells fan how much he loves her,” rhapsodized the Daily Mirror about a cliffside walk they took during a recent visit to Ireland.

Royal experts said the tabloids, feeling singed by the love-’em-and-leave-’em glamour of Meghan, have rediscovered what are considered Kate’s very sensible English charms. A poised, dutiful mother of three royal grandchildren, she has taken on a heavy load of engagements as her children have begun going to school.

“There was a danger, when Meghan and Harry were first married, that they were going to eclipse William and Kate,” said Penny Junor, a royal biographer. “They were just more charismatic and exotic. By comparison, Kate, whom we’ve all grown to know quite well, was not the new girl on the block.”

“Now,” Ms. Junor said, “Harry and Meghan, having done what they did, have made people think, ‘We quite like dull.’”