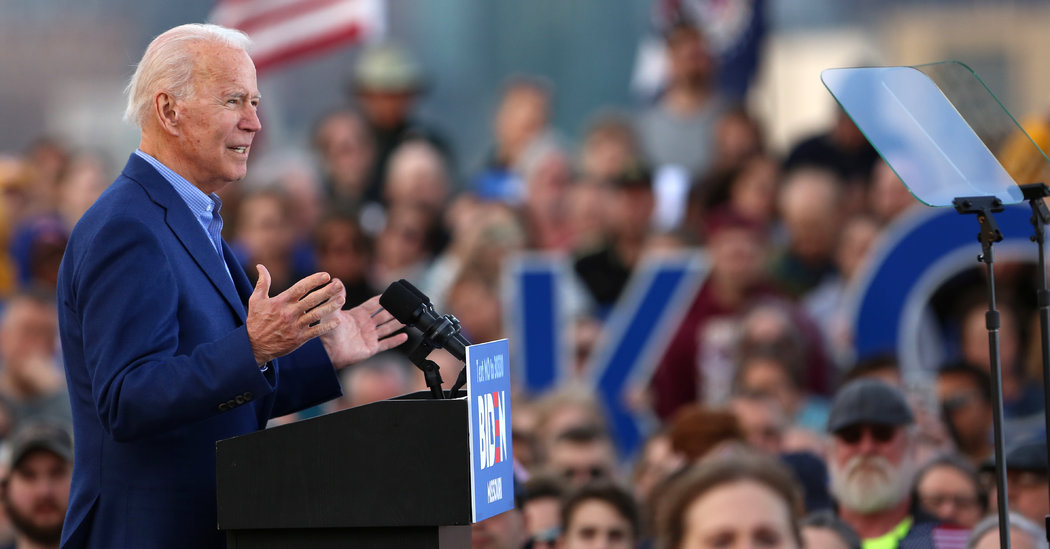 WASHINGTON — A manipulated video featuring Joseph R. Biden Jr. and spread by President Trump over the weekend has ratcheted up an online war that has put Twitter and Facebook in the middle of a debate over political speech.

The campaigns have fought for months over misinformation targeting Mr. Biden, and the latest salvo has taken on greater import with his surge in the Democratic primaries.

In response to such misinformation, the tech platforms have written new and diverging rules on political speech. On Sunday, Twitter tagged the video in question as manipulated content, while Facebook left the video intact without any flags about the false content.

The video came from a stump speech by Mr. Biden on Saturday in Kansas City, Mo., where he appeared to struggle through a sentence and with halting words said, “We can only re-elect Donald Trump.”

But the rest of Mr. Biden’s sentence was selectively edited out. In full, Mr. Biden was stressing the need for Democrats to unite against Mr. Trump.

“We can only re-elect Donald Trump if in fact we get engaged in this circular firing squad here. It’s got to be a positive campaign,” he said.

Dan Scavino, Mr. Trump’s assistant and the White House director of social media, shared a version of the video on Saturday on Twitter and Facebook.

“Sleepy Joe in St. Louis, Missouri today: ‘We can only re-elect @realDonaldTrump. #KAG2020LandslideVictory,” Mr. Scavino wrote with a link to the video.

The video circulated throughout much of the day on Sunday without a response from the social media networks. After users flagged the video to Twitter on Sunday, the company said it had determined the video violated its rules against synthetic and manipulated video and labeled the video as manipulated content. By that point, it had been viewed more than five million times and retweeted more than 20,000 times.

It was the first time Twitter had applied a policy announced in February against fake and misleading videos. Facebook, however, did not remove or flag the video as misinformation, angering the Biden campaign.

“Facebook’s malfeasance when it comes to trafficking in blatantly false information is a national crisis in this respect,” Greg Schultz, Mr. Biden’s campaign manager, said in a statement.

“It is also an unconscionable act of putting profit above not just our country, but every country,” he added. “Facebook won’t say it, but it is apparent to all who have examined their conduct and policies: They care first and foremost about money and, to that end, are willing to serve as one of the world’s most effective mediums for the spread of vile lies.”

Mr. Biden’s campaign has complained about false online ads by Mr. Trump’s re-election campaign before, beginning last October with an ad that ran on Facebook and other social media outlets that asserted that Mr. Biden had bribed the Ukrainian government to stop an investigation into Mr. Biden’s son.

Facebook refused to remove that video, saying false speech by politicians and their campaigns was permitted as an important facet to political discourse. Mark Zuckerberg, the chief executive of Facebook, reinforced that view with a speech on free expression at Georgetown University last October where he explained that political speech was one of the most vetted forms of discourse and that it was important for the public to hear from politicians, including lies.