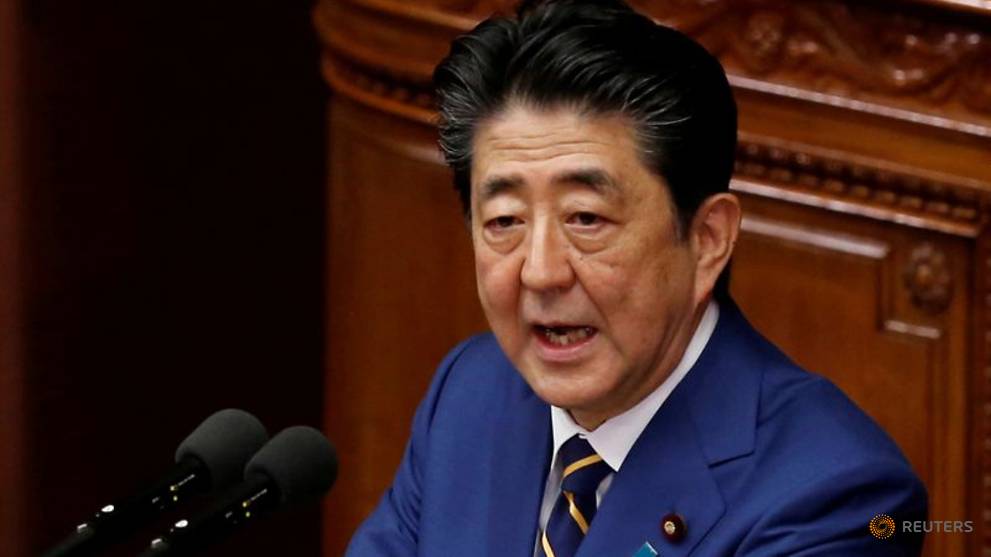 TOKYO: Japan is set this week to revise a law allowing Prime Minister Shinzo Abe to declare a formal state of emergency over the coronavirus, if needed, as Abe faces persistent criticism for his handling of the outbreak ahead of the Tokyo Olympic Games.

In perhaps his biggest test since returning to office in 2012, Japan’s longest-serving prime minister has come under fire for what critics have called an initial lack of leadership, followed by abrupt steps like school closures that left parents and employers scrambling.

Japan has more than 400 cases of the coronavirus. In addition, about 700 cases were confirmed on a cruise ship quarantined near Tokyo last month.

NHK reported the number of infections in Japan had hit 483 as of 11.30am on Monday, citing official data, with three cases reported earlier in the day.

Fourteen people have died, including seven from the liner. The virus has spread rapidly around the world, with more than 100,000 confirmed cases and 3,600 deaths.

Among criticisms is that Abe’s government was too slow to put curbs on visitors from China – a key source of economic growth – after the outbreak originated there late last year. In a recent opinion poll, 50 per cent said they didn’t approve of Abe’s handling of the outbreak, versus 37 per cent who said they did.

Commentators have also said Japan has lacked sufficient capacity to test for the virus, while failing to mobilise what capacity it has, leading to suspicions that the virus is spreading faster than data show. Vigorous testing programmes in countries like South Korea have detected high numbers of infections.

Speculation – denied by organisers – is swirling that the global outbreak will scupper Japan’s dream of hosting the Tokyo Olympics, an outcome that could become more likely if a state of emergency is declared.

“I want the Olympics to succeed more than anyone, but the negative factors are increasing,” Yoichi Masuzoe, a former Tokyo governor who was health minister during a 2009 influenza epidemic, told Reuters.

In its latest move, the government plans on Tuesday to submit to parliament a bill to revise a 2012 law, enacted after the 2009 epidemic, so it can be applied to the coronavirus if necessary. Parliament is expected to sign off on Friday.

The 2012 law was enacted while Abe’s Liberal Democratic Party was in opposition. Officials have said it could not be applied to the coronavirus without changes, although opposition parties and other critics say reinterpreting it is enough.

“APPEAL TO THE PUBLIC”

The law would let the prime minister declare an official state of emergency if the disease poses a “grave danger” to lives and if its rapid spread could have a huge impact on the economy. The impact of the virus outbreak is already increasing Japan’s risk of recession.

Governors in hard-hit regions could then ask residents to stay inside, close public facilities, expropriate land and buildings for medical facilities and request or order emergency transport of goods. The state of emergency could last up to two years with a possible one year-extension.

In the virus-hit northern island of Hokkaido, the governor declared a state of emergency late last month, although he acknowledged there was no legal basis to do so.

Abe has already requested that schools nationwide close and large-scale events be pared back or cancelled.

“Abe could apply the law by re-interpreting it. He’s good at that,” said Masahiro Kami, head of the Medical Governance Research Institute and a critic of the government’s response.

“He wants to appeal (to the public) because things are not going well,” Kami said. He added the most urgent issue was not further limits on public activities, but beefing up virus testing and early treatment of elderly and other high-risk patients.

Abe has not made clear what exactly would trigger a state of emergency, repeating on Monday that the revision was to prepare for a “worst-case scenario”.

That has left some analysts thinking he is reluctant to do so for fear of scuppering the Olympics.

“I suspect Abe doesn’t want to declare a state of emergency because it would be killing the Olympics himself,” said Koichi Nakano, political science professor at Sophia University.