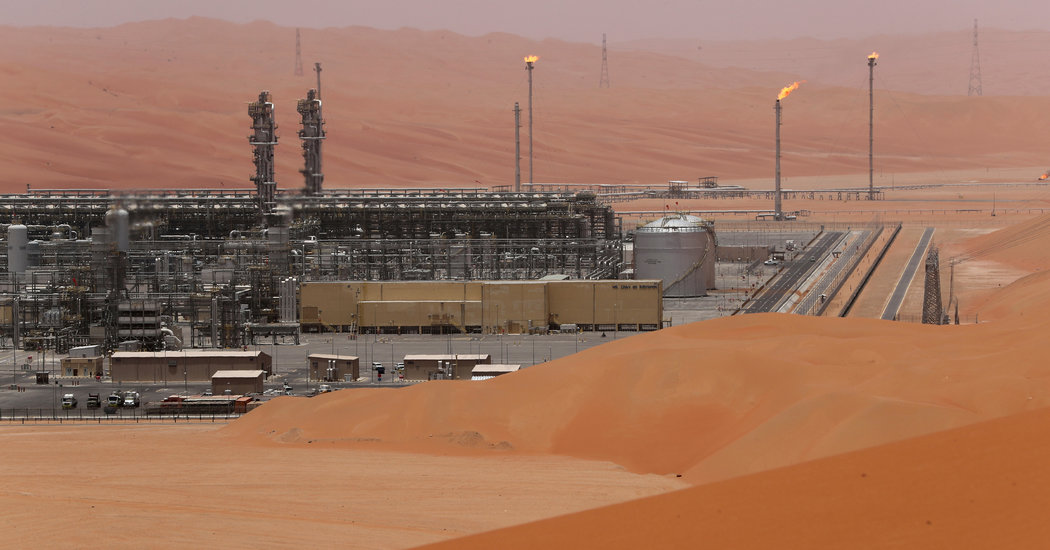 For the last three years, two factors have been hugely influential in the oil markets. The first has been the surge of shale oil production in the United States, which has turned the country from a large oil importer to an increasingly important exporter. The second is the alliance between Saudi Arabia and Russia, which recently have cooperated in trimming production to try to counter shale’s impact.

Now that cooperation between two of the world’s three largest oil producers — the third is the United States — appears to be at an end. Saudi Arabia, as the dominant member of the Organization of the Petroleum Exporting Countries, last week proposed production cuts to offset the collapse in demand from the spreading coronavirus outbreak. Russia, which is not an OPEC member, refused to go along. And the impasse has turned into open hostilities.

After talks with OPEC members in Vienna, Russia’s energy minister, Alexander Novak, returned to Moscow for consultations on Thursday. In his absence, OPEC officials met and came up with what amounted to an ultimatum. The group as a whole would trim production by 1.5 million barrels a day, or about 1.5 percent of world supply. OPEC, meaning largely the Saudis, would make the bulk of the cutbacks, one million barrels, as long as Russia and other producers trimmed the rest.

The gambit was “something of a boss move,” said Helima Croft, an analyst at RBC Capital Markets, but it backfired badly. Russia had played hard to get before, but this time Mr. Novak was not playing. The answer was “no” again, and the Saudi oil minister, Prince Abdulaziz bin Salman, and other officials headed back to their hotels with no results and no communiqué.

Failing to tighten supplies, the Saudis threatened to flood the market.

The standoff was ominous for the industry. Not only had OPEC and a wider group of producers — together known as OPEC plus — failed to agree on new cuts, but they had also failed to sign off on the extension of 2.1 million barrels a day in previous trims that would expire at the end of March. That created the danger of a tremendous flow of oil coming onto a market that was already hugely oversupplied and experiencing a steep slump in demand.

“From April 1, neither we nor any OPEC or non-OPEC country is required to make output cuts,” Mr. Novak said after the meeting, according to Reuters.

The Saudis struck back, notifying buyers on Saturday that they would offer deep discounts on their oil sales for April. The price cuts will probably be followed by other producers in the region, like the Saudi allies Kuwait and the United Arab Emirates. The intent, Saudi officials said, is to create more demand for their oil with lower prices.

The Saudis have been producing about 9.7 million barrels a day. The International Energy Agency, a Paris-based organization advising governments and industry, figures that the Saudis could produce more than two million additional barrels, while Kuwait, Iraq and the United Arab Emirates could add another million barrels a day.

The market was spooked by this potential deluge of crude. At one point on Monday, prices were down by more than 30 percent. By afternoon, they had recovered to around $36 a barrel for Brent crude, the international benchmark, still a steep 21 percent drop.

“The market really was banking on this alliance between OPEC and Russia,” said Neil Beveridge, an analyst at Bernstein, a market research firm. With that relationship apparently sundered, “there is just no support,” he added.

The Russians and the Saudis have long had a fraught relationship.

Despite having enormous oil reserves, Russia and the Saudi Arabia have rarely seen their way to cooperation. In his autobiography, “Out of the Desert,” Ali Naimi, the longtime Saudi oil minister, recounts that on the eve of what became a crucial OPEC meeting in November 2014, he met with Mr. Novak to ask for help in dealing with a growing oil glut. Joining in the talks was Igor Sechin, a close associate of President Vladimir V. Putin who is chief executive of Rosneft, Russia’s largest oil company.

The Russians refused to go along, Mr. Naimi says, and he packed up his papers and washed his hands of trying to stabilize the market through cuts.

A price slide to below $30 a barrel focused minds, eventually persuading the Russians to join forces with the Saudis. A kind of bromance developed between Mr. Novak and Khalid al-Falih, who succeeded Mr. Naimi as Saudi oil minister in 2016. The two put on what seemed like natural displays of camaraderie at OPEC news conferences.

But there were tensions, and for at least a year the Russians hinted that they were tiring of the arrangement, which capped the growth of oil companies like Rosneft. As production from shale continued to rise, OPEC and its allies had to keep cutting.

“They could see an endless series of cuts going forward, “ said Bhushan Bahree, a senior director at IHS Markit, a research firm. “They wanted to go back to growth rather than continue this arrangement with the Saudis.”

For their part, the Saudis absorbed most of the cuts to keep Russia on board, a situation that also stoked tension. In addition, Mr. Falih was fired last year by Crown Prince Mohammed bin Salman and replaced by the prince’s older half brother, Prince Abdulaziz, who is a veteran oil official but does not seem to have the warm relationship with Mr. Novak that Mr. Falih enjoyed.

In addition, power brokers like Mr. Sechin in Moscow appeared to be turning Mr. Putin against the Saudi deal. The Saudis have been pushing for cuts since at least early February as it became clear that the epidemic was going to hit demand hard. The Russians also argued in meetings that there was an opportunity to damage the shale industry in the United States, which had hurt both of the big producers. And Russia has built up a $570 billion fund that Moscow hopes will tide the country through an oil-revenue famine.

Russia may well damage the shale industry, but at great cost. The International Energy Agency forecast that shale output might decline in a $40-a-barrel environment. But a price war carries huge risks for the world, including depriving oil-producing countries of the wherewithal to finance social programs, including health care, at a time when they are threatened by the virus.