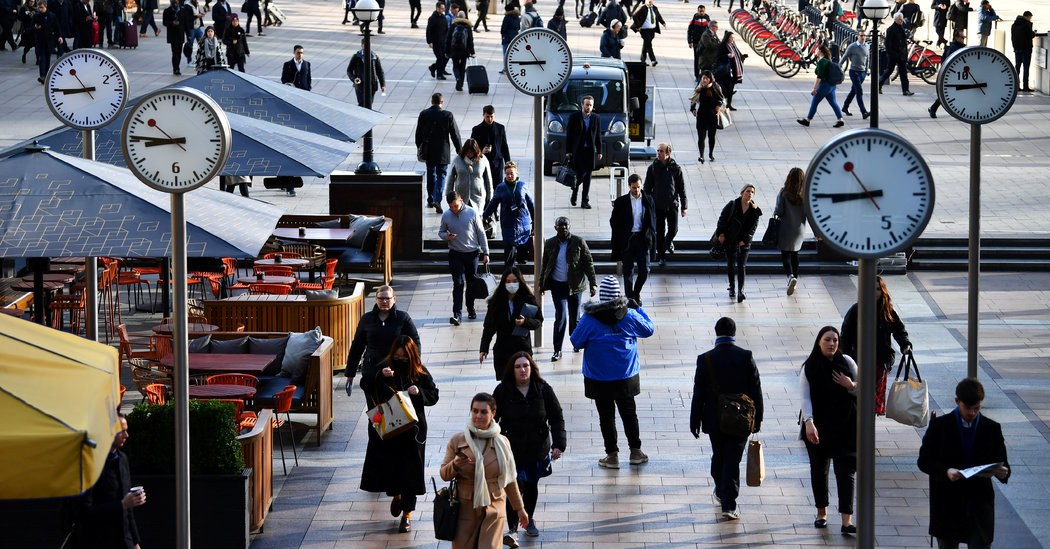 LONDON — Europe had already been teetering toward trouble. Even before the coronavirus outbreak quarantined the industrial heart of Italy and emptied the teeming streets of Venice, before France banned public gatherings and major trade shows were canceled in Germany and Spain, economists were openly warning about the prospect of an economic downturn across the continent.

Now, Europe is almost certainly gripped by a recession, amplifying fears that the global economy could be headed that way, too.

“It seems pretty difficult to avoid a recession in the first half of the year,” said Ángel Talavera, head of European economics at Oxford Economics in London. “The spread of the disease in Europe is a game changer. The question is how deep it will be, and how long it will last.”

But as the world absorbs the consequences of Europe sinking into a slump just as China suffers a profound downturn, the sense of alarm is heightened by another question with no obvious answer: Can European leaders transcend their often-bitter differences to forge an effective response — especially when this crisis may be beyond traditional economic policy prescriptions?

Recent history is not reassuring. Europe has earned its reputation for dithering, debating and cross-border recriminations while economic shocks play out largely unchallenged. This is especially true within the 19 nations that share the euro currency. They operate with strict limits on how much money individual nations may spend, and how much debt they may incur. They lack a political compact to enable a collective budget.

As Greece descended into a depression a decade ago in the wake of the global financial crisis — an event that posed an existential crisis for the euro — European leaders frequently prolonged the danger by failing to agree on an effective rescue package.

When Italy, Spain and Portugal were assailed by their own emergencies, with international investors demanding elevated rates of interest for continued lending, Europe’s policymakers exacerbated the distress through perpetual discord that conveyed the message that no one was really in charge.

At the center of these events was a foundational difference of values within the eurozone. Germany, Europe’s largest economy, and other Northern European nations like Finland nurse deep cultural aversions to debt. They use crises as platforms to lecture their Mediterranean cousins on their supposedly profligate ways. Southern European countries chafe at such depictions while lamenting the eurozone’s limits on spending, which have constrained their growth.

Now, another economic disaster is threatening European livelihoods, adding to the terror that has captured global markets. Few express confidence that European policymakers can do better this time.

The European Central Bank has long played the role of primary rescuer. In the decade after the financial crisis, the central bank pushed short-term interest rates down to zero to keep money pumping through European economies. It adopted the unorthodox policy of buying bonds to push longer-term interest rates lower, ensuring that companies and households could secure credit to promote further spending.

But many economists assume that the central bank has exhausted the potential of such policies. “The credit card is maxed out,” Mr. Dixon said.

Most expect that the European Central Bank will cut rates when it convenes on Thursday. That sense was enhanced on Monday as Saudi Arabia shocked markets by significantly increasing the supply of oil, pushing oil prices sharply lower and adding to a general sense of confusion among investors. In a moment dominated by the coronavirus outbreak, confusion is in an invitation to dark thinking. From Tokyo to to London to New York, stock prices plummeted.

But if the European Central Bank does cut rates, it will be mostly symbolic, an effort to signal that the authorities grasp the magnitude of the trouble.

When interest rates are at zero or below, pushing them further into negative territory tends to have little effect.

For Europe — as for the rest of the world — this crisis does not appear to be easily influenced by a reduction in interest rates. Italy’s broad quarantine has disrupted production at factories that are major suppliers of parts to the auto industry across Europe, a central threat to the Continent’s economy. These factories will not suddenly roar back to life if the central bank reduces borrowing costs. That will happen only when the threat to public health subsides.

The most meaningful way policymakers can alleviate the economic damage is through fiscal policy, unleashing government money that can help small businesses grapple with a loss of sales while aiding workers who are unable to get to their jobs. Governments could spur spending in a moment when shopping malls, restaurants, concert halls, convention centers and other venues for human interaction are being avoided as transmission zones for a lethal virus.

On Monday, as Europe absorbed the impact of Italy’s decision to cordon off some 16 million people from the rest of civilization, senior European leaders called for targeted government spending.

But, tellingly, Mr. Le Maire told French radio that he planned to discuss an economic stimulus plan with other European officials at a meeting a week later, on March 16 — a seeming eternity in the face of a rapidly spreading outbreak with no discernible boundaries.

Italy gained European approval last week to unleash a 7.5 billion euro (about $8.6 billion) package of spending measures to aid those harmed by the outbreak. But as the virus continued to spread, yielding growing numbers of cases in Germany, France and beyond, the European authorities appeared no closer to tackling the crisis collectively.

“There is very little coordination at this stage,” said Silvia Dall’Angelo, senior economist at Hermes Investment Management in London. “This is no longer contained to Italy, and there’s only a national-level response, which is suboptimal.”

Some held out hopes that the coronavirus would prove an impetus for the extension of European solidarity, a spur to collective action that has so frequently failed to materialize in other crises.

When the outbreak emerged in Italy last month, it was initially seen as a menace to European industry and a potential shock to the global supply chain. The outbreak began in China, shuttering industry there, and prompting fears that factories around the world would soon suffer shortages of parts and electronics. The jump to Italy exacerbated those fears, raising the likelihood that German automakers would have difficulty gaining parts made in Italian factories.

That story was consistent with the conventional wisdom at the time that the world economy was in for a rough few months but would bounce back. The virus would be contained, factories would revive, and products not made on schedule would be produced at some later point.

But the events of recent days have blown that scenario to bits. Italy and the rest of Europe are threatened with far more than disruption to their manufacturing supply chains. Tourism is being devastated as people avoid the confined spaces of airplanes, trains and buses. Hotels, restaurants and other parts of the hospitality industry are in peril. And many of these scrapped activities amount to outright economic losses, not just spending shifted from one time to another.

A trip to the dentist not made because of the outbreak will presumably be rescheduled to a less dangerous time. Not so outings to cinemas, night clubs and other entertainment venues. That spending comes off corporate bottom lines, limiting economic growth. This is the realization that has stock markets seized by fear as they struggle to get a handle on how bad things could get.

They could get very bad. The virus “looks likely to cause a worldwide recession and bear market in stocks,” said Charles Dumas, chief economist at TS Lombard, an investment research firm, in a report released on Monday.

Perhaps the danger has become so severe that it will demand European action. This crisis is not about arcane matters like credit ratings and derivatives. It centers on whether people live or die, the central fact that will determine the depth and breadth of the economic damage. That may prove enough for European leaders to push past their legacy of inaction to deliver a muscular response.

“Europe works in leaps and bounds,” said Maria Demertzis, an economist and deputy director at Bruegel, a research institution in Brussels. “There is inaction until problems hit, and then we take action. The question is, can we be a little quicker?”