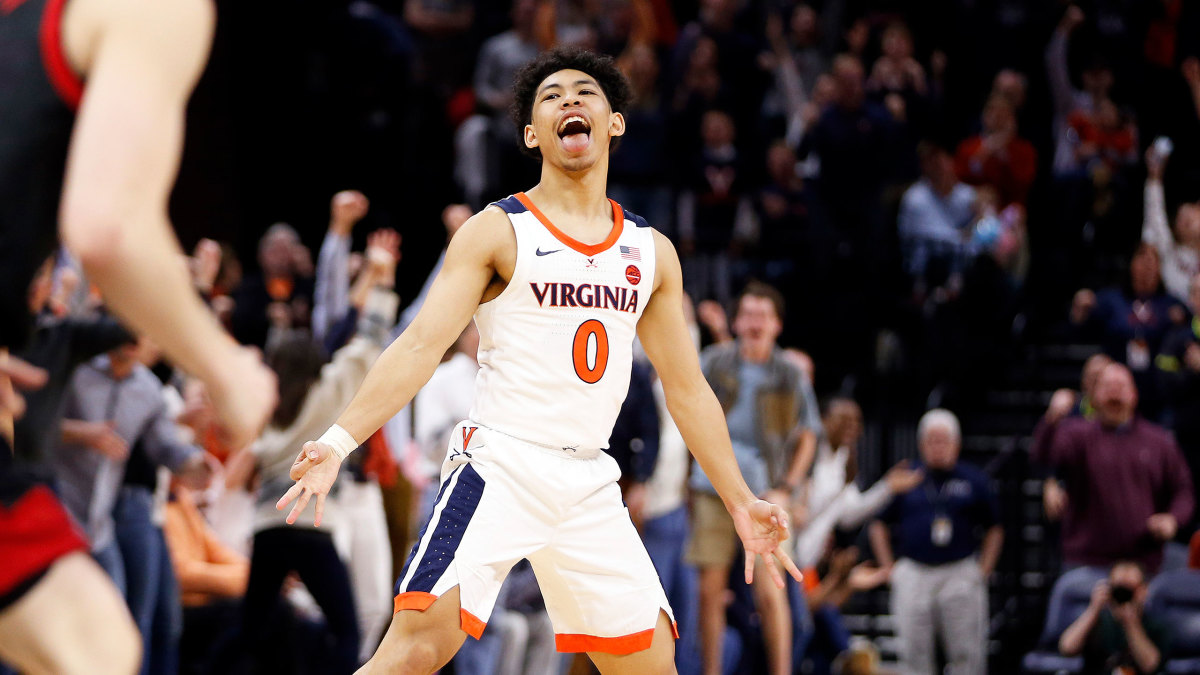 The college basketball regular season is complete after a final weekend of games, which featured a host of top-25 clashes and several conference regular season titles being earned. Before we fully turn our attention to the postseason, though, let’s look at what the final weekend taught us about what may still be to come in March.

Virginia is storming into the postseason … but is it sustainable?

Saturday’s win over Louisville was the Cavaliers’ eighth straight, a winning streak that not just erased any doubts of them making the NCAA tournament, but also earned Tony Bennett’s team the No. 2 seed in the ACC tournament—a remarkable accomplishment after all it lost from last year’s championship team. The Cavs have also done it by the skin of their teeth. Seven of those games were won by no more than three points, and Virginia’s last five games were won by a combined 13 points. That’s a sign of a team that knows how to close, but also one that undoubtedly has gotten at least a bit fortunate.

Those razor-thin margins have kept Virginia low in the NET (No. 41), and it checks in at No. 44 on KenPom. Bennett’s team has a comically large gap between its offensive efficiency (No. 235 on KenPom) and defensive efficiency (No. 1), but its ability to grind games down and its comfort level in playing tight contests could make it a tricky out in the ACC tournament and beyond. And, of course, there’s the not-to-be-overlooked fact that the two players leading the charge, Kihei Clark and Mamadi Diakite, know a thing or two about winning in March.

Marquette, meanwhile, is once again stumbling into the postseason

On Feb. 9, the Golden Eagles were riding high. They had just beaten Butler at home for their sixth win in seven games, climbing into the Top 25 on KenPom and sitting at 7-4 in the Big East. Since then, Marquette has lost six of seven, and will enter the Big East tournament on a three-game losing streak. Its defense has been particularly porous during that stretch, giving up more than a point per possession in all but one of the six defeats.

This may feel like a bit of déjà vu for Golden Eagles fans. One year ago, the team was 23-4 before it lost four straight to end the regular season, then fell in the Big East semifinals. Because of its late-season struggles, Marquette was a popular upset pick in March Madness brackets, and sure enough it ran out of gas in a 19-point first-round loss to Ja Morant and Murray State.

As a current No. 8 seed on Bracket Matrix, the Golden Eagles could have their hands full once again in the first round. On the flip side, should they wind up in an 8/9 game and win, their region’s No. 1 seed likely won’t be thrilled about seeing Markus Howard on the other side in the second round. The explosive scorer’s exceptional four-year college career is coming to a close, but it’s going to take a Marquette course correction over the next two weeks if he’s going to leave Milwaukee with a single NCAA tournament win to his name.

Kentucky found a needed resiliency in coming back to beat Florida

Let’s set the scene for Saturday’s Kentucky-Florida matchup in Gainesville: The Wildcats, coming off a home loss to Tennessee in which they blew a 17-point lead, are without starting point guard Ashton Hagans, who didn’t make the trip for personal reasons. With 11:48 to go, the Gators build their biggest lead (18). With 9:04 to go and Florida up 12, UK leading scorer Immanuel Quickley fouls out, leaving John Calipari with just six scholarship players.

The ingredients didn’t seem to be in place for a Kentucky comeback—especially on the road—but the Wildcats rallied behind Nick Richards and timely baskets by the likes of Keion Brooks, Johnny Juzang and Nate Sestina, pulling out a 71-70 win on EJ Montgomery’s tip-shot. While the win had no effect on the SEC race, which Kentucky had already won, it was the kind of comeback that demonstrates a team’s mental toughness heading into the postseason. It was especially important for a young Wildcats team that has struggled to put teams away all season and has a tendency to play to the level of its opponent.

The Big Ten tournament is going to be a bloodbath

Raise your hand if you had Wisconsin earning the No. 1 seed in the Big Ten tournament even one month ago. Anyone? The Badgers stunned the conference with an eight-game win streak to close the regular season, not only earning a share of the title with Michigan State and Maryland but also placing above both in the pecking order. The Big Ten, though, has been a gauntlet all season long, and its conference tournament looks set to be just as difficult. A Terps team that has spent most of this year inside the AP top 10 is now the No. 3 seed. A Penn State team that had a great shot at the league title not too long ago didn’t even finish in the top four. A Minnesota team ranked 29th on KenPom is the No. 12 seed.

And Wisconsin’s reward for getting the top seed? It’s the opportunity to face either Michigan or Rutgers in the quarterfinal, two teams that should be going dancing and spent time ranked in the top 25 this season. Home-court advantage has been a boon in the Big Ten this year, but that’s all wiped out now at Bankers Life Fieldhouse in Indianapolis. Expect an epic fight to be the last team standing in the deepest conference in the country.

For different reasons, the Longhorns and Red Raiders both finding themselves on the NCAA tournament bubble entering conference tournament week is unexpected. Texas is here after reviving its season in the last few weeks, winning five straight before a bad home loss to Oklahoma State on Saturday hurt its case. That defeat has raised the stakes for the Longhorns heading into the Big 12 tournament, where their quarterfinal is against none other than in-state foe Texas Tech.

The Red Raiders are trending in the opposite direction, having lost four straight to end the regular season, going from looking certain to go dancing to more shaky ground. Both KenPom (No. 21) and the NET (No. 22) love Texas Tech, but its 18-13 record (9-9 Big 12)—including a 3-10 mark in Quad 1 opportunities and 7-13 mark vs. Quad 1/Quad2—is less than impressive. To avoid sweating out Selection Sunday, both Texas schools would greatly benefit from a win on Thursday—but only one can get it.

It’s been a season to forget for the Huskies. After losing a ton from last season’s Pac-12 regular-season champion roster, a recruiting class anchored by five-stars Isaiah Stewart and Jaden McDaniels brought optimism that the team’s level wouldn’t drop off too far. Instead, Washington has slogged its way through a 15-16 regular season and a dismal 5-13 mark in the Pac-12, where it finished in last place.

It’s hard to believe that this is the same team that beat Baylor in its first game of the season, but perhaps things aren’t quite as bleak as its record indicates. Since Christmas, 10 of the Huskies’ 14 losses came by six points or less. KenPom’s luck statistic, which essentially measures a team’s actual winning percentage against its expected winning percentage based on its efficiency margin, ranks Washington dead last among the country’s 353 teams.

Entering the Pac-12 tournament, there is hope it could put things together, though. The Huskies have won three of their last four games, including road tilts over Arizona State and Arizona, two likely NCAA tournament-bound teams. On the season, they boast the nation’s fifth-best two-point defense and second-best block rate. It’s the offensive side where Mike Hopkins’ team has been the most troubled, including an eyesore 21.6% turnover rate. Still, in a conference that has been unpredictable, is it that crazy to think UW—if everything breaks right—could make a run to the Pac-12 championship, or at least deliver a loss or two to someone else? It starts by trying to beat Arizona for the second straight game on Wednesday.