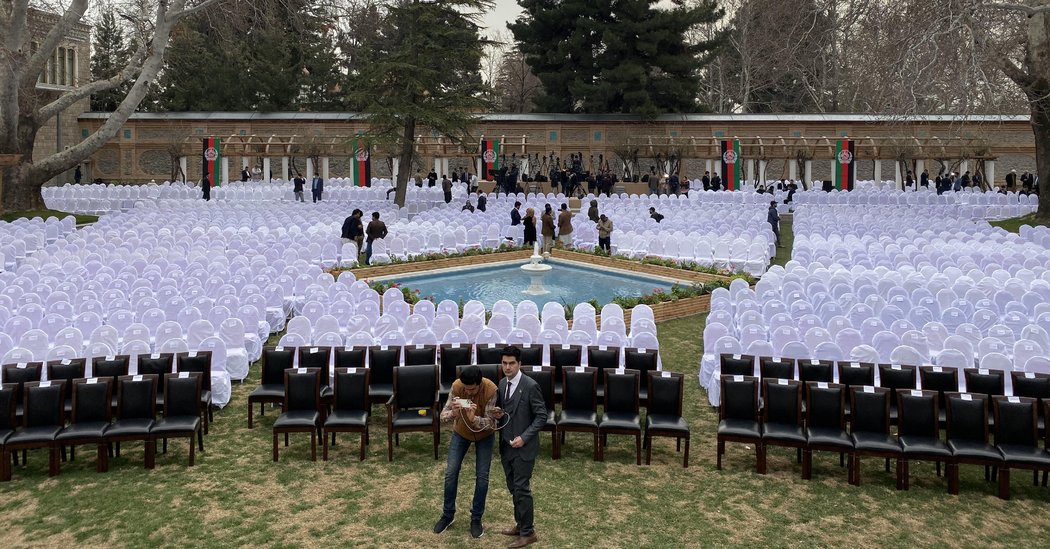 Mr. Abdullah’s team, hours after, announced that they had issued 10,000 invitation cards. Seats were arranged around a fountain, and a stage was decorated with flowers.

“We have just sent invites to embassies and foreign organizations in Kabul,” Fazal Ahmad Manawi, a senior adviser to Mr. Abdullah, said on Twitter around 9 p.m.

Around 2 a.m. on Monday, Mr. Manawi tweeted that the American side had told them that Mr. Ghani had agreed to postpone his inauguration to allow more time for negotiations between the two camps. One adviser to Mr. Abdullah, speaking on condition of anonymity, said Mr. Khalilzad had managed to persuade Mr. Ghani to postpone after getting Secretary of State Mike Pompeo into the conversation. There was no immediate confirmation of that claim from American officials.

But just hours later, at 6 a.m., Shahhusain Murtazawi, a senior adviser to Mr. Ghani, said the inauguration was going ahead on Monday as planned.

For many Afghans, the political crisis has been a draining distraction from more dire challenges facing the country, including the resumption of fighting with the Taliban, the spreading of coronavirus, and poverty rates that are growing worse by day.

“I am a member of the cheering squad, we are here to clap and cheer when they speak,” said Noorullah, a teenager from Parwan Province, who was at Mr. Abdullah’s inauguration. “I don’t care about any of them because they don’t care about the country — just look at where the price of potatoes has come to.”

One of the most telling episodes of the crisis was underway in Dar-e-Suf District, in the northern province of Samangan, where the district governor was abducted by the Taliban a couple of weeks ago. As part of their campaign of appointing officials to show their parallel government, Mr. Abdullah’s team stepped right in to fill the vacancy even before the fate of the abducted governor was clear, pushing aside the caretaker appointed by the central government.