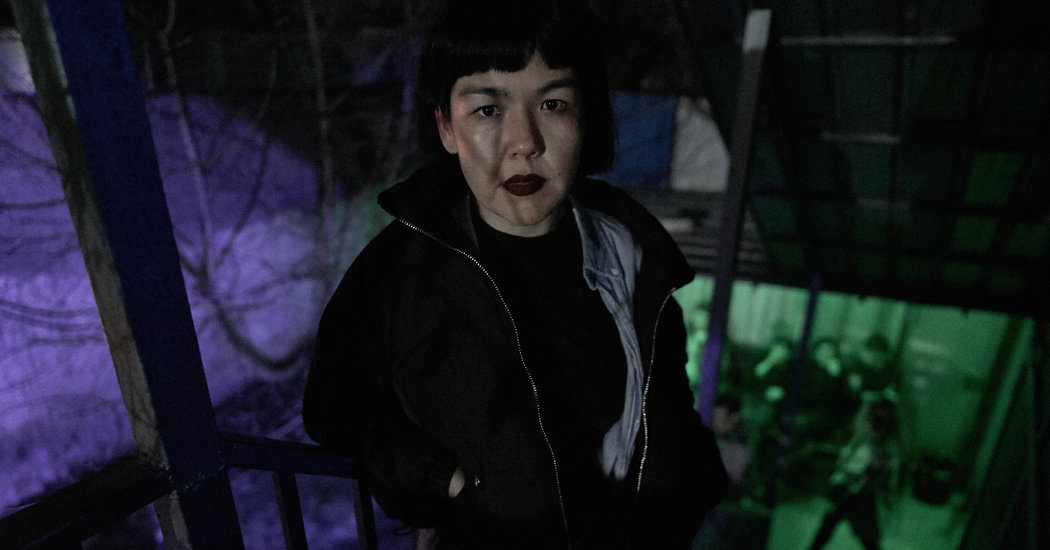 ALMATY, Kazakhstan — On a recent Friday night, Mitya Koksharov was dancing exuberantly to techno music in a crowded former sauna. The spindly young man in dark-rimmed glasses bent his leg and fell dramatically to the floor — a vogueing move known as a dip, invented decades ago in New York’s underground L.G.B.T. ballroom scene. When he landed and ostentatiously stretched out his arms, the crowd around him screamed in delight.

It was the kind of dancing you might expect to see at a party in Brooklyn, not in an authoritarian former Soviet republic, but this was no ordinary Kazakh dance floor: It was Zvuk (“sound,” in Kazakh), a regular techno event with a uniquely progressive bent here in Kazakhstan’s largest city.

Koksharov said later that it was the only party in the city where he felt comfortable dancing like this. “This is the only place where I feel like myself,” he said.

Zvuk is the brainchild of Nazira Kassenova, a 28-year-old Kazakh D.J. who performs as Nazira. She was behind the decks that night, spinning her characteristic blend of hard-charging techno to the approximately 200 attendees.

Nazira, a fast-rising star in the world of electronic music, performs at some of Europe’s biggest clubs, including Berghain in Berlin and De School in Amsterdam. She has also played a central role in a growing underground techno scene in Kazakhstan that offers a counterpoint to the country’s repressive political and social climate.

“I wanted to create a space where people can be a freak — be free, gay, straight, rich, poor, undress if they want to undress,” she said, before correcting herself. “Wait, nobody undresses in Kazakhstan.”

Political opposition and freedom of speech are severely repressed in this oil-rich Central Asian country. After 30 years in office, the country’s longtime president, Nursultan Nazarbayev, stepped aside last year. His handpicked successor, Kassym-Jomart Tokayev, won the election to succeed him last summer, in a vote that the Organization for Security and Cooperation in Europe denounced as unfair.

Kazakh society remains deeply conservative and, for some minority groups, oppressive. The country is ranked 158th out of the 180 countries on the Reporters Without Borders World Press Freedom Index. L.G.B.T. people regularly face the threat of violence, and Human Rights Watch has denounced the country’s widespread domestic-violence problem.

But when two demonstrators were imprisoned for 15 days after unfurling a protest banner at the Almaty marathon last spring, there was a groundswell of public opposition to the government, on social media and in illegal street protests that have continued through the fall and winter. A meeting by a nascent opposition political party in late February was disrupted when the police arrested party leaders and would-be delegates.

In an interview, Amir Shaikezhanov, the co-founder Kok.team, an L.G.B.T. rights organization (the name refers to the Kazakh word for light blue, a color associated with L.G.B.T. people in the country), said Kazakhstan seemed to have reached a “turning point.” The desire for reform was especially strong among younger Kazakhs, he added, who have been reared on Western pop culture — and, in some cases, on electronic music.

“Techno is unbiased music. It is the kind of music that brings people together,” he said, pointing out that Zvuk is the only party in Kazakhstan where L.G.B.T. and other liberal-minded people openly dance together. “I’m not sure if Nazira understands what kind of impact she has just by being here.”

Sitting in a cafe in the center of Almaty, a city of over 1.8 million people nestled below the towering Tian Shan mountain range, Nazira said she wanted Zvuk to be a kind of utopian “microcosm” for Kazakhs, “so that when they go back outside afterward, there’s a small shift.”

Born to what she called a “superconservative” family in the southern city of Taraz, Nazira originally intended to become a molecular biologist, she said. But while studying on a scholarship at the University of St. Andrews in Scotland, she visited influential dance venues like the Sub Club in Glasgow and became enamored of the ways electronic music broke down barriers between club-goers.

“It is music that goes into your soul,” she said.

After moving back to Almaty in 2014, she began D.J.ing and organizing parties that replicated the feelings of freedom she had experienced in European clubs. Until recently, Zvuk had no regular venue. One edition took place in a bunker, another in a club that was forced to close after neighbors saw two men kissing outside. The party is now organized by a collective made up of Nazira and five others, and often takes place at Bult, a former sauna that’s run by a lesbian couple.

In recent years, Nazira’s international DJ career has become what she describes as a “Cinderella story.”

In 2015, Mat Schulz, the artistic director of Unsound, a popular electronic music festival in Poland, saw Nazira play a set at a small party in Almaty. “Nazira was like a beacon,” he said in an email, describing her D.J. sets as “fluid and wide-ranging” and praising her blend of classic techno and rarely heard Eastern European tracks.

After his visit to Almaty, Schulz invited Kassenova to play the main stage at Unsound in 2017, and the dance-music magazine Mixmag selected her as one of the 15 breakthrough D.J.s for 2019. She has appeared on Boiler Room, the popular dance-music broadcasting platform, and at many of the world’s best-known techno clubs, including Tresor in Berlin, Nitsa in Barcelona and Bassiani in Tbilisi, Georgia.

Nazira said she was inspired by the way Bassiani had become the center of a broad movement for civil liberties in the country. But Kazakhstan is far less permissive and liberal than Georgia, Nazira said.

“I stay positive, because if I compare it to five years ago when I started doing parties, it is a huge change,” she said. “And if we keep going, in five years it’s going to happen.”

Around 2 a.m. at Zvuk, the crowd surrounded Nazira’s turntables and began chanting her name as she finished up her set. Sitting upstairs in the club’s bar, Mutali Moskeu, 24, said that Nazira had played a “crucial” role in establishing an expanding electronic-music scene in Almaty, in part by organizing workshops to teach people how to D.J. themselves. Two years ago, he attended such an event, he said, and has since started his own party, called Groovchick.

Another attendee, Zhangir Mukhametkhana, 21, a language-school employee, said that Kazakhstan’s Communist past had made it especially difficult for the country’s residents to let themselves go.

“Zvuk is a place where I can engage with other people and realize I’m not the only one who doesn’t like what’s happening in our country,” he said. “Nazira created this atmosphere in this city that shows that things can be different.”