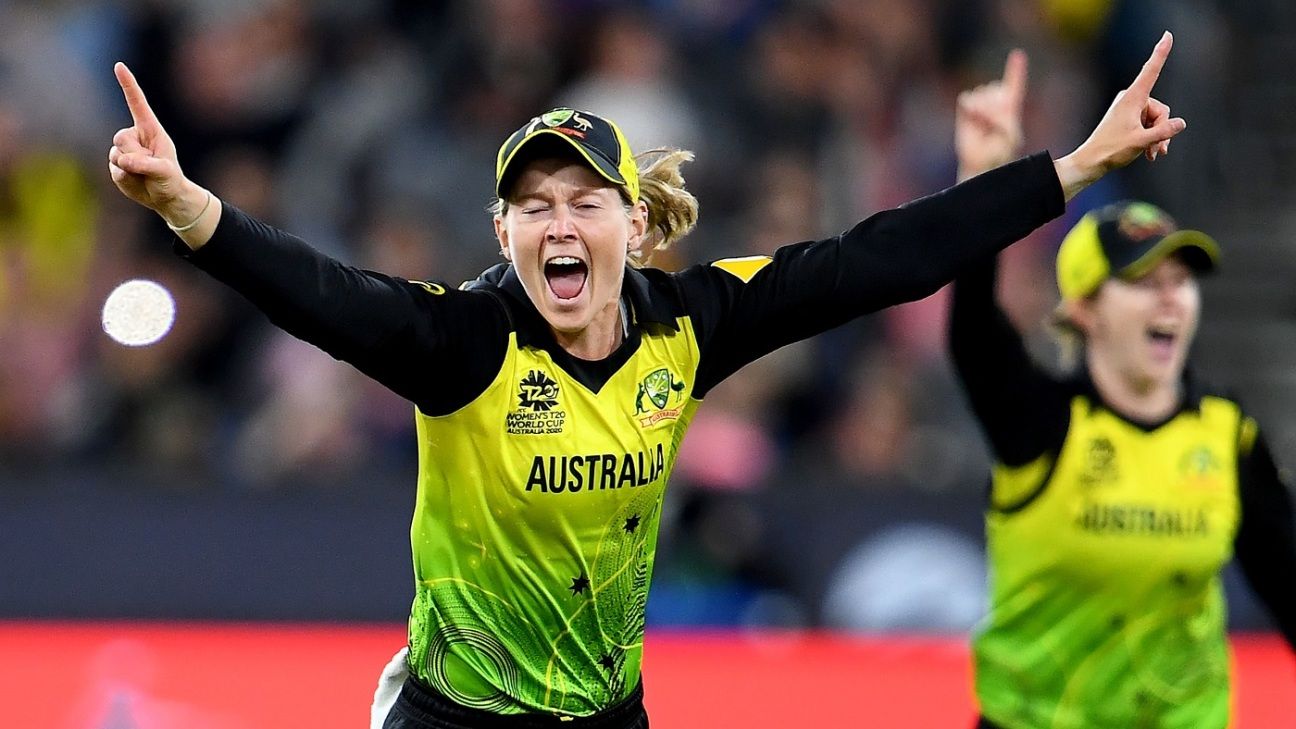 Meg Lanning, the victorious Australia captain, has lauded her side’s ability to triumph over adversity to lift a fifth Women’s T20 World Cup.

They may have been the hosts and defending champions, but Australia did not have the tournament they would have wanted. They lost strike bowler Tayla Vlaeminck to a foot stress fracture before the matches even started and then lost the tournament opener to eventual final foes India. They survived a scare against Sri Lanka and a close one to New Zealand, their last group match in which star player Ellyse Perry’s World Cup ended with a torn hamstring, before scraping through a rain-affected semi-final against South Africa.

But on Sunday, before 86,174 people at the MCG, it all went right for Lanning and her side. Alyssa Healy set them off with a blistering 75 from 39 balls, Beth Mooney finished it with an unbeaten 78 from 54 and when Megan Schutt dismissed teenage batting sensation Shafali Verma for just two on the third ball of India’s chase, Australia were set. Schutt ended up with four wickets and Jess Jonassen three amid an India batting collapse – and the concussion substitution of Taniya Bhatia – which put the imposing target of 185 beyond reach.

“I’m really proud of this group of players and staff,” Lanning said. “We’ve had everything thrown at us throughout this tournament. We’ve had ups and downs. We scraped through the semi-finals, and to put our best performance on the park on the biggest stage in our careers is certainly something I’m very proud of.

“It was tough, definitely, especially after we lost that first game. There was a lot of expectation on us from the outside and on the inside as well. We came into this tournament to win, no doubt about that. And as soon as there was 90,000 people expected on the ‘G, we were hoping to be there and just to get here, I think was a significant achievement.

“There was definitely some tough times through there but we stuck together as a group, we really just had each other’s back the whole time and it’s just a great group to be a part of.”

Lanning also had special words for Vlaeminck and Perry. “Coming in, they were big parts of our plans, especially against a team like India, and we had to change tack pretty quickly,” Lanning said. “A very special group to go to plans Bs and Cs and be able to execute them on the big stage.

“To Pez and Tay, they’ve been amazing with our group. The brave faces they’ve put on have been really special and they’ve really added to our group so they’re just as much a part of this as everyone else.”

Harmanpreet Kaur, the India captain, was left to console a distraught Verma – who had amassed just one fewer run in the tournament than Kaur, Smriti Mandhana and Jemimah Rodrigues combined with a breakout batting performance – but had a disappointing final. Verma also put down a fairly straightforward catch off Healy in the first over of the match, though she was not alone in the dropped chances department. Mooney also survived a caught-and-bowled chance when Rajeshwari Gayakwad spilled one in the fourth over.

“The way we played in the league games, it was outstanding, and I know it probably was unfortunate that we dropped those catches and then after that we didn’t make it,” Kaur said. “We just need to stay there and focus on areas, especially fielding because today we know that because of the fielding we weren’t able to win this game.

Harmanpreet said if nerves were a factor, they were part and parcel of the sport and her side would learn that. “It’s a part of the game because sometimes you win, sometimes you lose, you have to keep learning,” she said. “The first game was very outstanding for us because that game kept us high on the table and I think that game gave us a lot of confidence but today was unfortunate for us.

“If we talk about the last T20 World Cup, that time we qualified for the semis and this time for the final. We are on the right line because every year we are improving and now we just need to think about how we are going to play with more focus on the main games because sometimes we are not able to give our best and focus well on crucial games, and I just hope upcoming years will bring us a lot of glory.”