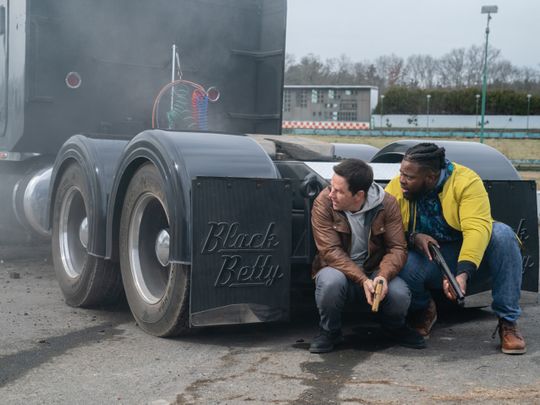 If the name Spenser, the titular character in ‘Spenser Confidential’, sounds familiar, there is a reason.

Introduced in Robert B Parker’s 1973 ‘The Godwulf Manuscript’, Boston private investigator Spenser (no first name, though friends have been known to call him Spence) has enjoyed remarkable longevity, with Parker turning out some 40 novels before his death in 2010 and Ace Atkins continuing the string with eight others so far.

With all this material, it’s no surprise that multiple Parker novels have been filmed, but they’ve uniformly been shown on the small screen, with ABC, Lifetime and A&E all having their shot at the material.

So it’s nothing if not fitting that this latest Spenser incarnation makes its bow on Netflix, not the big screen. Starring Mark Wahlberg and directed by Peter Berg, it’s an entertaining example of private eye genre material — energetic, violent and fun — with those key players a big part of the reason why.

Such a native of the city that the Dorchester street he lived on during his teenage years makes an appearance in the film, Wahlberg is the definition of Boston charisma.

More than that, the actor is at ease with an ex-cop turned investigator role that demands the ability to be a convincingly tough action hero as well as knowing your way around a funny line.

Walhberg’s connection with the part is helped by the long relationship he’s had with director Berg. This is their fifth film together, a collaboration that started with 2013’s ‘Lone Survivor’ and included such cinematic solid citizens as ‘Deepwater Horizon’ and ‘Patriots Day’.

As for Berg, he brings energy, commitment and a sense of fun to what might have been a more standard genre exercise, dealing as it does with the familiar stew of dirty cops, a corrupt establishment and drug smuggling street gangs with a taste for machete-wielding violence.

Adapted apparently quite loosely from Atkins’ ‘Robert B Parker’s Wonderland,’ ‘Spenser Confidential’ has ended up with a genially amusing script expertly tailored to its actors by Sean O’Keefe and the canny veteran Brian Helgeland.

And, as smartly cast by the veteran Sheila Jaffe, ‘Spenser Confidential’ gets spot on performances from a variety of actors, from household names including Alan Arkin to other less celebrated but undeniably talented folks.

‘Spenser Confidential’ begins in full action mode, with the title character going to the house of his superior, Boston Police Captain John Boylan (Michael Gaston) and whaling the tar out of him as partner Driscoll (Bokeem Woodbine) tries to restrain him.

We won’t learn Spenser’s reasons for the outburst until later, but what happens immediately is that he’s sentenced to five years in a correctional facility.

The film picks Spenser up on his last day inside (the word “PRISON” is helpfully flashed on screen in giant letters) as a group of sullen inmates attempt to ambush him before he can get out. Good luck with that.

Spenser has big plans to leave Boston and restart his life as a driver of semi trucks in Arizona (Colleen Camp makes an all-too-brief appearance as his instructor) but fate, as they say, intervenes.

Our hero is picked up outside prison by his old mentor and boxing/MMA coach, Henry Simoli, played in his most irascible mode by the irresistible Arkin.

Spenser is grateful for Simoli’s offer of a place to stay, but doesn’t relish having to share his room (and his dog’s affections) with the coach’s latest protege, Hawk (Winston Duke), a huge man with a lot of MMA potential but an inability to throw a punch that Spenser is tasked to remedy.

Also hoping to reconnect with Spenser is someone he’s desperate to avoid, old girlfriend Cissy Davis (a very funny Iliza Shlesinger), a woman with a fierce temper who is not to be trifled with, not even a little bit.

No sooner does Spenser hit the Boston streets than his old nemesis Captain Boylan is murdered and he becomes a suspect. Then, the crime is laid at the feet of another cop, a nominal suicide, whose tearful wife (a moving Hope Olaide Wilson) is convinced, as is Spenser, that he had nothing to do with it.

Because he is hard-wired to do the right thing, Spenser puts his trucking dreams aside and decides to investigate, with Hawk as his reluctant partner. Their journey is traditional, but ‘Spenser Confidential’ wouldn’t be as much fun as it is, if it wasn’t. A possible sequel is teased at the end of this adventure, and that wouldn’t be a half bad idea.