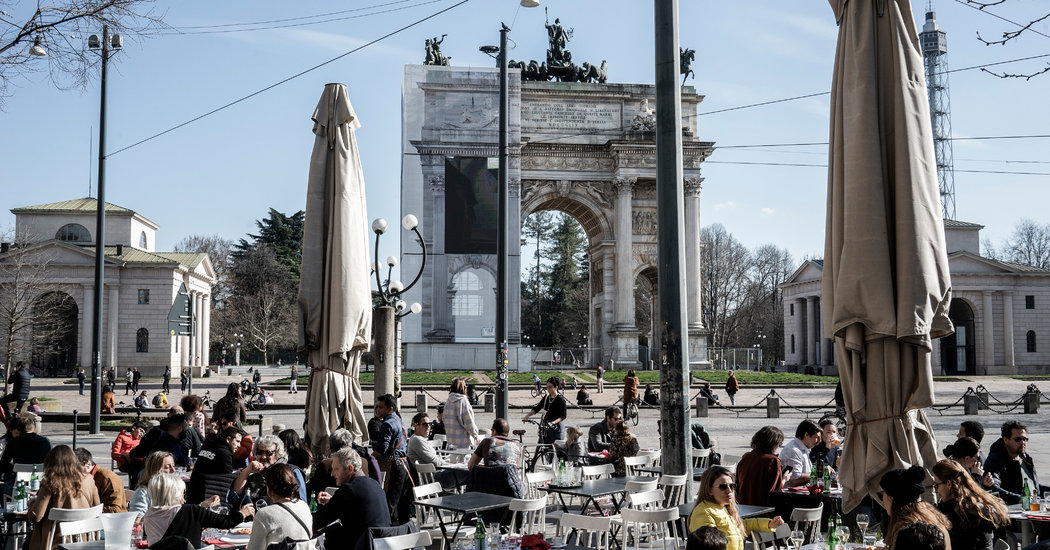 ROME — Prime Minister Giuseppe Conte ended his 2:15 a.m. news conference to announce the extraordinary lockdown of Italy’s north with a plea that other heads of state may not have felt compelled to make.

“We must understand that we all must stick to and we must not counteract these measures,” he urged in the early hours of Sunday morning. “We must not try and be clever.”

Mr. Conte had just decreed a series of measures that amounted to the largest clampdown against the coronavirus outbreak in the Western world, restricting the movement of about a quarter of Italy’s population and jeopardizing its economy.

But unlike China, where the outbreak began, this is a democracy, and debate erupted immediately over how well the government will be able to enforce the new rules — and whether Italians will actually obey them.

“We are the new Wuhan,” said Elena Lofino, 39, who works in a shopping center in the closed-off northern region of Lombardy, referring to the locked-down Chinese city of 11 million people where the virus is believed to have originated.

As she hung out with her friends, Ms. Lofino said she thought the measures made sense. “It’s going to be a huge sacrifice,” she said, “but we’ll accept it.”

Hours after the prime minister announced the new restrictions, Italy’s death toll from the virus jumped by more than 50 percent in a single day to 366 from 233 on Saturday — the most deaths officially reported for any country outside China. Italy has the worst outbreak in Europe, with more than 7,300 known to be infected.

Many, including Mr. Conte, have appealed to Italians to reject their tendency toward “furbizia,” the Italian word for the sort of cunning or cleverness typically channeled into getting around bureaucracy and inconvenient laws.

Furbizia, to be sure, is a broad-brush character trait ascribed to Italians, often by other Italians.

But on Sunday, it seemed to be front of mind as travelers rushed onto trains out of Lombardy before the decree went into effect in the afternoon and as health experts and officials implored the public to abide by the law and act responsibly.

Italy’s social media feeds on Sunday were filled with famous singers and media personalities engaging in a mingle-shaming campaign.

“You need to stay home!” Barbara Balanzoni, a doctor, said in a video that went viral in Italy. She said there were not enough respirators to help people sick from the virus.

“There are too many people walking around,” Dr. Balanzoni protested.

As museums closed across the country, Italy’s culture minister, Dario Franceschini, thanked “the many protagonists of music, cinema, and show business” who promoted on social media the “I’m Staying Home” hashtag.

“It’s a very important message for our youth,” he wrote on Twitter.

In Rome, outside the locked-down “red zones” farther north, the authorities recommended that people limit their movements to only what is “strictly necessary.” Valeria Graziussi, a Neapolitan living in Rome, said she and her friends had decided to “do an experiment.”

On Sunday, she went for an afternoon coffee at the Café Sant’Eustachio, one of the city’s best-known cafes, which is usually packed. “You rarely get to stand at the counter for more than 30 seconds,” she said.

Ms. Graziussi still found lines to get served at the counter, and so considered the experiment a success.

“We haven’t been terrorized enough,” her friend Davide d’Andrea said with a shrug.

The strict new decree went into effect on Sunday afternoon, and it includes three months of potential jail time for people who fail to observe some its provisions, including those restricting the movement of people who test positive for the virus, and bans on gatherings.

The Italian authorities have consistently taken some of the most aggressive steps to stop the virus’s spread. They have canceled flights from China in January, quarantining entire towns in February and now severely limiting movement in all of Lombardy — home to the economic powerhouse Milan — as well as in swaths of other nearby regions and iconic cities like Venice.

That has not been enough for some European officials. The Czech prime minister, Andrej Babis, said on Sunday that Italy should ban all its citizens from traveling to Europe.

It Italy, critics said the calls for civic duty were undercut by confusion.

They said that contradictory messages from the government and from officials of the northern regions about what people could do and where they could go were not helping. They also criticized the national government in Rome for a schizophrenia that vacillates between drop-everything alerts and just-wash-your-hands reassurances.

While Prime Minister Conte said Italians were “obligated” to stay put in the demarcated northern areas unless they had been granted permission to pass through police checkpoints, the Lombardy official running the region’s response to the crisis said it was not so strict.

Giulio Gallera, the Lombardy region’s top health care official, said in a Facebook live post that the decree signed overnight by Mr. Conte had fostered “doubts” among citizens. Mr. Gallera suggested that citizens, to preserve the country’s economy, should be able to move around for work. And he said the national government should clear up any confusion on the matter.

In the days before the decree, old men outside the quarantined town Zorlesco joked that their friends often sidestepped the rules and eluded the police checkpoints by taking old country roads to the bar for a drink outside the locked-down area.

But Italians officials clearly do not think any of this was funny, and they have lost patience with any invocations of furbizia.

In the country’s southern regions, the governors say that anyone arriving from locked- down northern areas should go into quarantine.

Giuseppe Ippolito, the director of the Lazzaro Spallanzani National Institute for Infectious Diseases in Rome, declared on Italian television that “the people who fled last night are a potential risk for the country.” He urged them to contact the health services, report their situation and “be ready for eventual isolation.”

Some people thought they were doing the right thing by leaving Milan for the south.

At Milan’s Central train station early Sunday morning, Giorgia Caredda, a 30-year-old social media manager, waited for a train to Rome so that she could help take care of her father, who has heart problems, “in case something bad happens.”

“One side of me feels really silly” she said about being prompted to leave by a sense of impending doom. “I got this sensation of being chained and needed to get out.”

The authorities in the Lazio region, where the regional president on Saturday said he had contracted the virus, posted on Facebook pictures of busy squares and streets in Rome with a #wecantdothis caption.

In Luigi Barzini’s 1964 classic study of his countrymen, “The Italians,” he attributed the value put on furbizia to Italy’s habit of being conquered and governed by a long line of hated foreigners or quislings, from Napoleon to the Hapsburgs.

“Under the surface the Italians invented ways to defeat oppressive regimentation,” Mr. Barzini wrote. “As they could not protect their national liberty in the field of battle, they fought strenuously to defend the liberty of the individual and his family, the only liberty they understood anyway.”

The writer compared the rules those leaders imposed to “the hedges in a steeplechase course” that Italians used to show off their speed. Laws, he said, became a necessary evil if only because they provided the delight of evading them.

“How could one circumvent laws if there were none?” he wrote.

This is precisely the kind of thinking that Mr. Conte urged Italians to avoid.

“We must safeguard our health,” he said early Sunday, “and that of those we love.”

In some unlikely quarters, that message seemed to be breaking through.

Antonio Ponti, 47, a D.J. in Milan’s club scene, had planned a party in defiance of the crackdown on the city’s night life. To skirt an ordinance against events in venues that don’t allow people to keep a meter’s distance from one another, he cleverly planned the party outdoors.

But as the toll of virus grew, and talk of tough restrictions resonated in Milan, he said he did not want to be seen as a “plague spreader.” He followed the lead of other promoters and pulled the plug.