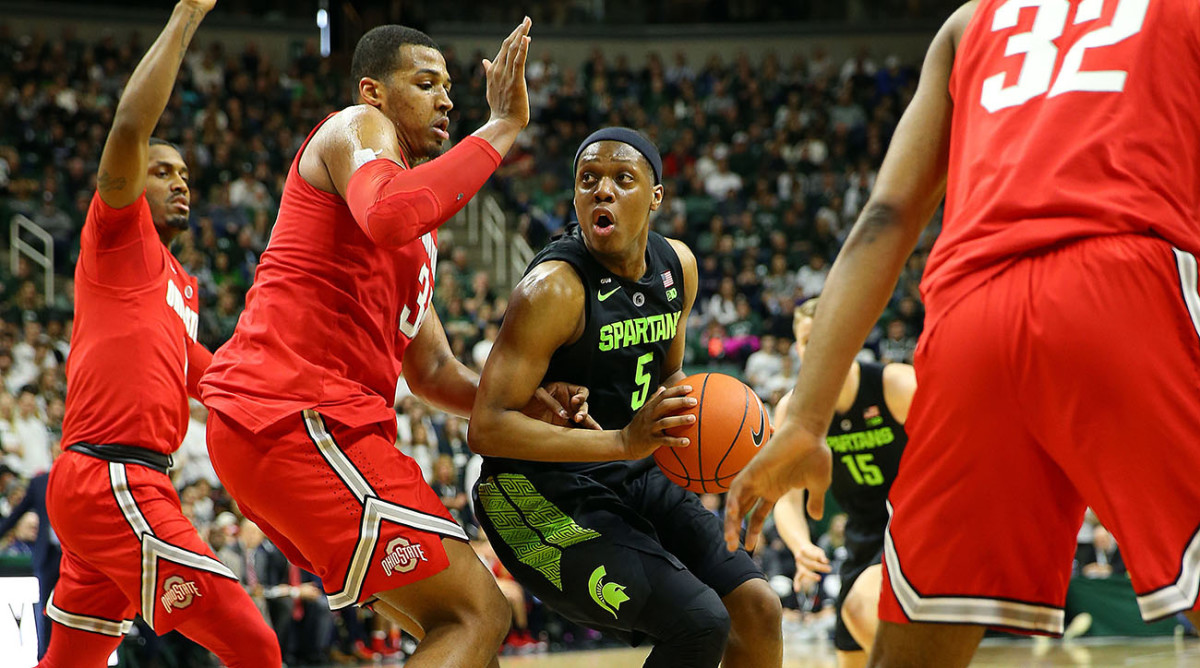 Cassius Winston plays his final home game for No. 16 Michigan State on Sunday when he tries to help the Spartans claim at least a share of the Big Ten title at the expense of No. 19 Ohio State.

It has been a season of trials and tribulations for Winston, who will leave Michigan State (21–9, 13–6) as the Big Ten’s all-time assists leader. He spent the early part of the season grieving the loss of his brother Zachary, who was fatally struck by a train in November. It created a unique and challenging dynamic between Winston and coach Tom Izzo, who has deftly tried to navigate how to communicate with him.

Yet Winston and the Spartans, as they seem to do every season, have persevered and entered March with the potential to return to the Final Four for a second straight season. They’re reached success despite playing without injured starting senior guard Joshua Langford all of 2019-20.

Winston has maintained a steady scoring output, averaging 18.3 points to go with his 5.9 assists per game. He had 11 points and four assists in the second half, keying Michigan State’s comeback from a 15-point halftime deficit to upend No. 20 Penn State 79–71 on the road Wednesday night.

The senior finished with 14 points and seven assists. While Winston did his thing on the perimeter, Xavier Tillman bulled his way inside for 23 points and 15 rebounds. Tillman hit 10 of 13 shots and keyed an effort that limited Penn State counterpart Lamar Stevens to a 3-for-19 effort.

The win left Michigan State as part of a three-way tie atop the Big Ten and guaranteed it will be seeded no worse than third for the conference tournament in Indianapolis next week since it swept Illinois in the regular season.

Ohio State (21–9, 11–8) gave itself a chance for a fourth place finish with a 71–63 victory over No. 23 Illinois on Thursday night. Kaleb Wesson scored 19 points and E.J. Liddell added 17 and 11 rebounds for the Buckeyes, who can finish anywhere from fourth to 10th pending the results around the Big Ten over the final days of the regular season.

The Buckeyes have won four straight and nine of their last 11 following a rough patch in which they dropped six of seven. A rejuvenated defense has keyed the turnaround. Ohio State has held opponents to an average of 60.7 points in those victories and allowed only one opponent to reach 70 in those contests.

Michigan State has won the last three games between the teams, including a 77–70 victory in the quarterfinals of the Big Ten tournament last season, where Winston totaled 18 points, seven rebounds, and five assists. The Spartans have also reeled off six straight wins over the Buckeyes at the Breslin Center since a 72–70 defeat in 2012.