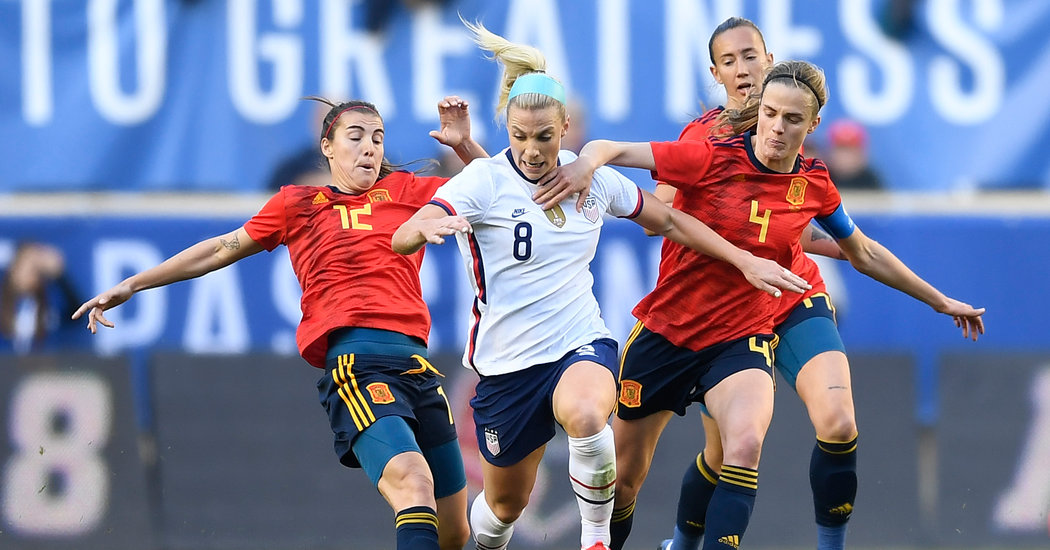 On the field, of course, neither the team nor the federation that employs it would dispute that their goals continue to align nicely. Sunday’s victory against Spain — on a header by midfielder Julie Ertz in the 87th minute — ran the team’s unbeaten streak to 30 games, and its record under Coach Vlatko Andonovski to a perfect 9-0.

The United States has not lost a game at all in 14 months — a defeat to France in January 2019 that itself ended a 28-game unbeaten run — and as it quickly warms to Andonovski’s methods, tactics and lineup preferences, the team is a heavy favorite to regain its Olympic title in Tokyo this summer. It has scored 28 goals this year. It has yet to allow a single one.

Life, then, at least in a soccer sense, is good. Off the field, though, the interests of the women’s team, which last year sued U.S. Soccer for gender discrimination, and the federation continue to diverge.

Two weeks ago, in court filings in California, the team set $67 million as the price for settling its lawsuit. But on Saturday night, and again in an interview on Sunday, the federation’s president, Carlos Cordeiro, said the team and its lawyers were actually demanding tens of millions of dollars more.

In a letter to U.S. Soccer’s members that he later released publicly, Cordeiro said the women’s players actually had refused to even discuss a proposed multimillion-dollar settlement of their lawsuit unless U.S. Soccer first pledged to make up the difference in the payouts for the men’s and women’s World Cups moving forward. The requirement, he said, could cost U.S. Soccer tens of millions of dollars every four years that, he argued, the federation could not afford.

World Cup payouts represent the largest gap, and the most extreme example, in the yearslong fight about equal pay for men and women in soccer. In the most recent comparison, U.S. Soccer received $4 million for winning the Women’s World Cup in France last summer, just one year after France took home $38 million for lifting the men’s trophy in Russia.

Wielding those figures as a powerful public relations cudgel, lawyers for the women’s team have for years used the yawning gap in their calculations to create the widest possible disparity between what U.S. Soccer pays its men’s and women’s teams.

But the World Cup payouts are determined by FIFA, world soccer’s governing body, not U.S. Soccer, Cordeiro noted in his letter. And equalizing them every four years because FIFA will not, he said, would be a significant blow to the federation’s finances, significantly limiting the funding available for programs supporting everything from youth development to coaching and referee education.

“There is indeed a significant difference in World Cup prize money awarded by FIFA to the men’s and women’s championship teams,” Cordeiro acknowledged in the letter. “However, it is not reasonable or fiscally sound for U.S. Soccer to make up the gap.”

Cordeiro’s letter, made public a day before the women’s team was scheduled to face Spain in a tournament organized by U.S. Soccer, infuriated the players, who acidly dismissed the points in it through a statement that included words like “falsehoods,” “misleading” and “dishonest.” The players also accused Cordeiro of repeatedly trying to arrange meetings with the team outside the presence of the athletes’ lawyers.

Cordeiro defended his efforts at personal mediation on Sunday, saying he was merely trying to restart a dialogue that has gone nowhere for months. “I’m trying to have an amicable sit-down that will end in a resolution,” he said.

But his letter, the latest salvo in a public relations battle between the team and the federation that has played out largely in court filings and news releases, also served to emphasize just how far apart the sides remain two months before they are scheduled to meet in a federal courtroom in Los Angeles for the start of a high-stakes trial.

U.S. Soccer is perhaps the world’s biggest and most enduring sponsor of women’s soccer, and its top officials continue to bristle at even the suggestion that it underpays its women’s players or denies them even a bit of the support they require to succeed. It provided full-time salaries for the players long before other countries, for example, and even paid World Cup bonuses for more than a decade when FIFA did not. (World Cup bonuses for all women’s teams were introduced at the 2007 tournament; by then, the United States had played in the event four times, and had won it twice.)

To the women, though, U.S. Soccer’s claims that past injustices cannot be remedied without wrecking the organization’s balance sheet serve as a continuing indictment of budgets that, in their view, only perpetuate the discrimination that led them to sue.