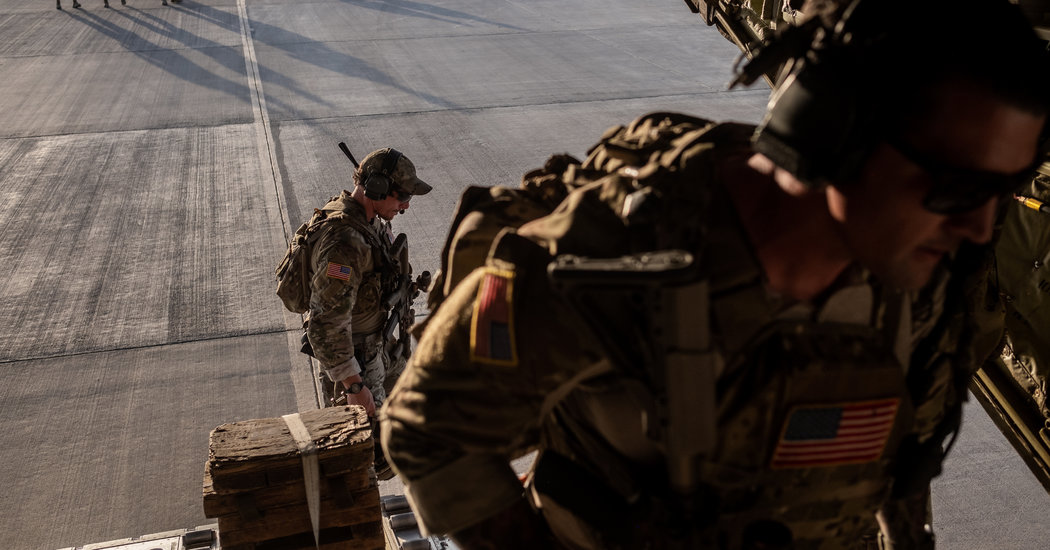 WASHINGTON — In a secure facility underneath the Capitol, members of Congress stopped by all last week to review two classified annexes to the Afghan peace accord with the Taliban that set the criteria for a critical element of the agreement: What constitutes enough “peace” for the United States to withdraw its forces?

The Taliban have read the annexes. Nonetheless, the Trump administration insists that the secret documents must remain secret, though officials have struggled to explain why to skeptical lawmakers.

Defense Secretary Mark T. Esper, in congressional testimony, appeared unaware of — or seemed unwilling to discuss — the secret annexes just days before the agreement was signed. And lawmakers who have paid the most attention to the peace plan also openly express frustration with the lack of a mechanism for verifying compliance that they believe Secretary of State Mike Pompeo had promised.

At the core of the two documents, according to people familiar with their contents, is a timeline for what should happen over the next 18 months, what kinds of attacks are prohibited by both sides and, most important, how the United States will share information about its troop locations with the Taliban.

While it may sound odd that the American military is sharing troop locations with its enemy of 18 years, the goal is to give the Taliban information that would allow it to prevent attacks during the withdrawal. Mr. Pompeo described the annexes last week as “military implementation documents.”

That is part of it, but they appear to be much more.

Because the documents lay out the specific understandings between the United States and the Taliban — including what bases would remain open under Afghan control — the details are critical to judging whether the United States is making good on its promise to leave only if conditions allow, or whether it is just getting out.

The State Department has struggled to explain why the criteria for the terms, standards and thresholds for the American withdrawal could be known to the adversary but not to the American people or allies. In response to questions from The New York Times, the State Department issued a statement on Friday saying that the documents remained classified because “the movement of troops and operations against terrorists are sensitive matters.”

“We do not want, for example, ISIS to know those details,” the statement added, referring to Islamic State fighters in Afghanistan.

But another reason for the secrecy, according to several people familiar with the matter, is that the annexes leave the markers for peace remarkably vague, making it far from certain that the Taliban must convert into a counterterrorism force — as President Trump suggested a week ago — or that they are required to make complete peace with the elected government of President Ashraf Ghani of Afghanistan.

In fact, as written, they appear to give Mr. Trump, or his successor, enormous latitude to simply declare that the war is over and leave. But many of Mr. Trump’s aides suggest that American counterterrorism forces and a significant C.I.A. presence should remain in the country. How that will be resolved within the U.S. government, with the Taliban and with the Kabul government remains to be seen, and any resolution likely will prove difficult.

Many of the Republicans and Democrats who have taken the opportunity to review the documents say they are unimpressed.

Representative Liz Cheney of Wyoming, the No. 3 House Republican and one of the sharpest critics of the accord, said before the agreement was signed last week, “Any deal that the United States would contemplate entering into with the Taliban should be made public in its entirety.”

After reading the pact, including the classified annexes, Ms. Cheney said that the deal failed to provide mechanisms to verify that the Taliban was keeping the promises that Mr. Pompeo had described at the signing. “My concerns still remain,” she said, declining to describe the contents.

Senator Christopher S. Murphy, Democrat of Connecticut, said in an interview that the thresholds outlined in the annexes were “remarkably fuzzy” and that it was unclear how the United States would measure success.

Representative Tom Malinowski, a New Jersey Democrat who served as a senior State Department official in the Obama administration, posted a blistering message on Twitter last week about the annexes.

“Bottom line: the administration is telling a terrorist group the conditions (such as they are) of our withdrawal from Afghanistan, but not telling the American people,” he wrote. “This is wrong. And it serves no national security purpose.”

Lawmakers have voiced widespread unhappiness about Mr. Pompeo’s outreach on the subject. He called top members on the Senate and House committees dealing with foreign affairs last weekend to give them a cursory heads-up that the documents were coming to Congress, but lawmakers and their aides said they had not heard from him since.

Days before the agreement was signed, Mr. Esper and Gen. Mark A. Milley, the chairman of the Joint Chiefs of Staff, appeared to not know about — or seemed reluctant to discuss — the secret annexes.

“Are you aware of any contemplation of any secret side deals with the Taliban?” Ms. Cheney asked on Feb. 26 during a House Armed Services Committee meeting.

“Nothing, nothing comes to mind right now that you’re mentioning,” Mr. Esper replied.

The annexes predominantly revolve around a committee to facilitate communication between the two parties to ensure commitments are being adhered to, according to officials who have read them. No details have come to light about the composition of that committee.

They describe the parameters for when it would and would not be appropriate to use force, including commitments from the Taliban not to attack American forces during a withdrawal. Over all, the annexes make up no more than a few pages, often with just one to two sentences laying out each component. For example, the Taliban are not to conduct suicide attacks, and the Americans forgo drone strikes — portions of the agreements that thus far have held.

General Milley hinted in congressional testimony last week what scope and scale of attacks were not permitted under the agreement.

In its statement, the State Department said the secret annexes were consistent with the public agreement. “The arrangements include specific commitments by all parties to efforts to continue to reduce violence until a permanent and comprehensive cease-fire is agreed in intra-Afghan negotiations, while preserving the right of all parties to self-defense,” it said. The United States has “a robust monitoring and verification mechanism” to track and assess the behavior of the Taliban, it added.

But those who have seen the agreement said the specifics were so nebulous that they doubted the United States retained much leverage.

“The documents provided none of the assurances that I felt like we heard from Secretary Pompeo and others about a rigorous process that was going to make sure we hold the Taliban accountable for their end of the deal,” said Representative Andy Kim, Democrat of New Jersey, who served in Afghanistan as a civilian adviser to Gen. David H. Petraeus.

“I saw nothing in there that gives me any confidence” that those assurances are in place “beyond trusting the word of the Taliban,” he said. “This vague, thin package of documents is all we could actually get agreed to by the Taliban. I don’t really understand how we can say we have what we need to be able to commit to the troop level agreements that have been articulated.”

He added, “How can I meaningfully talk to my constituents about this when I’m not even allowed to share information with them that the Taliban already knows?

Mr. Murphy agreed, but noted, “That being said, I’m not sure we were ever going to get bright-line terms for the mechanisms by which the Taliban prevents extremist groups like Al Qaeda from ever returning to Afghanistan.”

“I think the terms were always going to be very difficult to put down into words,” he said.