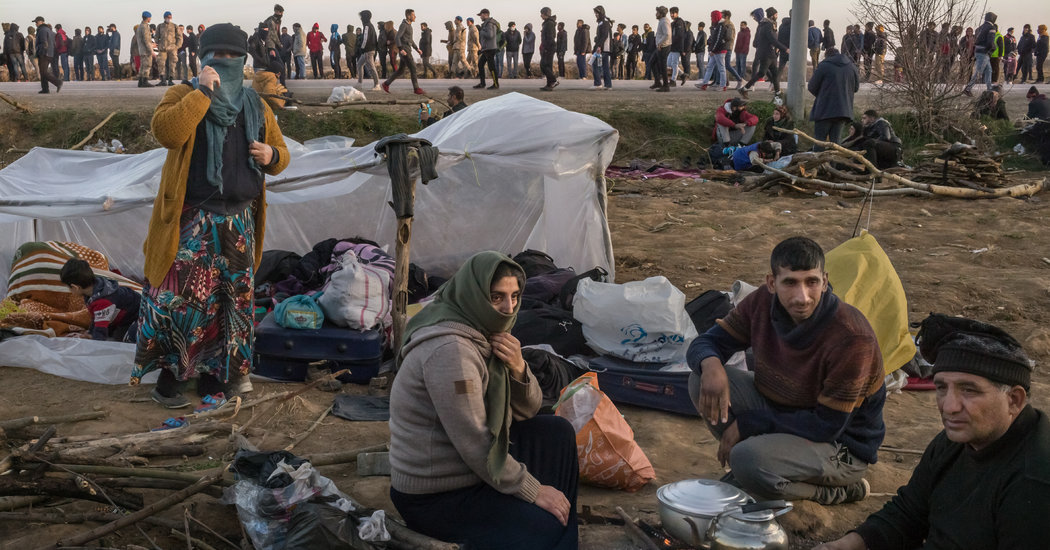 EVROS, Greece — The farmers and pensioners wore black clothes and heavy boots, imitating Greece’s special forces, and trod along a rural road on a night patrol looking for migrants trying to cross the northern land border with Turkey. “We’ll get you next time!” they shouted at a small group of men who had made it over and fled.

Two hundred miles to the south, on the border island of Lesbos, locals angrily blocked a dinghy full of migrants from Turkey, including a pregnant woman and children, from getting off on a pier.

“No more!” they yelled, cursing.

On land and at sea, one thing is clear along Greece’s meandering border with Turkey: This is not 2015 anymore. Then, while much of Europe was convulsed with anger and fear as more than a million asylum seekers poured in from distant wars, Greeks helped rescue refugees at sea, or greeted them with empathy as they traversed the country en route to northern Europe.

The citizens of the island of Lesbos were even nominated for a Nobel Peace Prize.

Now, the reaction is overt hostility. A new center-right Greek government has temporarily suspended accepting asylum applications and pledged to summarily expel those who come in order to discourage migrants. And ordinary citizens, many of whom who are fed up, are taking matters into their own hands.

Villagers from border towns are forming civilian patrols to round up migrants. Islanders have set up road blocks to stop migrants from reaching refugee camps. Others have physically attacked aid workers and journalists, accusing them of helping migrants come to the island.

For Greeks, the frustration is palpable, and the situation different from five years ago. This time around, Turkey, itself home to more than 3 million Syrian refugees, has opened the gates to thousands of migrants to enter Greece as it tries to pressure Europe for help in the conflict in Syria.

Unlike 2015, this crisis feels far less spontaneous than manufactured, and many Greeks want none of it. The Greek government has responded with a crackdown, shutting the borders, deploying the army and drumming up a wartime rhetoric against Turkey, which it accuses of orchestrating an invasion.

As it is, for Greeks, the migrant crisis of five years ago has yet to end. The problems it saddled the country with have persisted and wrung almost every drop of generosity from a people who had prided themselves on their compassion.

Refugee camps on Lesbos, and other islands, continue to expand and fester. They have spilled into local communities who feel they have gotten little support from the government or the European Union. Relatively few of the migrants have been moved on to the mainland, and fewer still have been moved from Greece, to alleviate the burden. There is no resolution in sight.

Instead, thousands more continued to arrive, even after Turkey had mostly cut off the flow of desperate asylum seekers from Afghanistan, Iraq and Syria, as part of an agreement with the European Union.

“When the Syrians started coming five years ago, we gave clothes, we cooked for them, we bounced their babies,” said a woman named Fotini who lives in Moria village, bordering the notorious refugee camp on Lesbos, where more than 15,000 migrants are hosted in facilities designed for 3,000.

“Five years of solidarity,” she added. “We can’t take it any more. We want our lives back.”

She and other locals had gathered around a small fire on the side of the road, forming an impromptu roadblock aimed at stopping migrants from walking through the village.

On Lesbos, others have been violent. Groups of locals beat up a German photojournalist and a correspondent, and assaulted the local head of the United Nations refugee agency.

Aid workers with nongovernmental organizations were run off the island, assaulted and harassed until many organizations decided to evacuate staff and volunteers worried about their safety.

Similar scenes played out along Greece’s 120-mile northern frontier with Turkey. Though it’s guarded heavily by the army, ordinary Greeks felt compelled to chip in.

Some of the more violent groups seemed to have been mobilized by known far-right extremists, but it was evident that the movement against migrants enjoyed broader social support in the borderlands.

Irate farmers lined up their tractors, each adorned with a small Greek flag, and declared they were ready to fight to protect the country.

For most, it was a matter of national pride and a duty to guard Greece’s borders against Turkey, an ancient foe. Some even belonged to a National Guard of trained civilians, who hold state-issued weapons and can be mobilized in a national emergency.

The Greek Army has not mobilized the National Guard. But it has put the borders on high alert, with hundreds of additional troops patrolling, and repelling, migrants and leaving the vast green delta of the Evros River, part of the northern frontier, feeling like it is on war footing.

Archbishop Ieronymos, the head of the Greek Orthodox Church, visited to bless the soldiers patrolling the border. Villagers brought bags of croissants and water bottles to those guarding border posts.

“We’ve come to deliver food and drinks for our boys,” said one, Anna Fotidou. But even she worried that things could go too far.

“There are people of extreme conviction here,” she said. “I don’t think they should be taking things into their own hands.”

One man, Athanasios Kamilaris, live-streamed a vigilante patrol as he and others dressed in fatigues looked for migrants.

Another post showed a video of him stopping a group of migrants, one holding a child and another a baby wrapped in a blanket, from attempting to cross the river into Greece.

Mr. Kamilaris, who claimed to be National Guard and posted images of himself with a rifle, did not respond to multiple requests seeking comment.

Greece and Turkey are both members of NATO, yet even in the best of times, they are tense neighbors. They share a centuries-long history of bloodshed and strife: Today’s modern Greek republic was once ruled by the Ottoman Empire.

Next year marks the second centennial of Greece’s war of independence — a fundamental event in the country’s origin story taught at schools and homes for generations.

In the current standoff, that history has fueled the vigilance on the part of ordinary Greeks.

The scuffling at the border has been violent. Migrants and local Turkish officials said at least two people were shot and killed on March 2 by Greek security forces, who also used tear gas as they attempted to push the migrants back into Turkey.

Turkey’s interior minister this week encouraged migrants to cross anywhere they could along the border, not necessarily at authorized points, and said that Turkey would deploy a thousand special forces police officers with Zodiac boats to prevent pushbacks.

“Turkey has become an official trafficker of migrants to the European Union, and Greece does not accept this situation,” said Prime Minister Kyriakos Mitsotakis of Greece.

“The problem is an asymmetric threat and illegal invasion of thousands of people that threatens our territory,” Mr. Mitsotakis said.

Still, only a few thousand migrants at most have managed to enter Greece from Turkey since last Thursday, a relatively high, but not extraordinary, number.

By comparison, the United Nations refugee agency said more than 7,500 had arrived in December last year.

The Turkish threats have nonetheless given rise to a sense of panic among ordinary Greeks, bolstered by wall-to-wall coverage of events on Greek national networks.

Locals on Lesbos said they believed international aid workers were coordinating with smugglers and facilitating the movement of migrants to the island, but there was no evidence of such collusion.

On Wednesday, no new dinghies arrived. At least eight Navy and Coast Guard vessels were patrolling the stretch of coastline on the island’s north, and strong winds blew, making the six-mile stretch of water choppy with waves.

“Since we got rid of the NGOs there have been no new migrants coming,” one man said at the Moria village roadblock. “Is that a coincidence? No. That’s it, we’re done, we’re taking back control.”