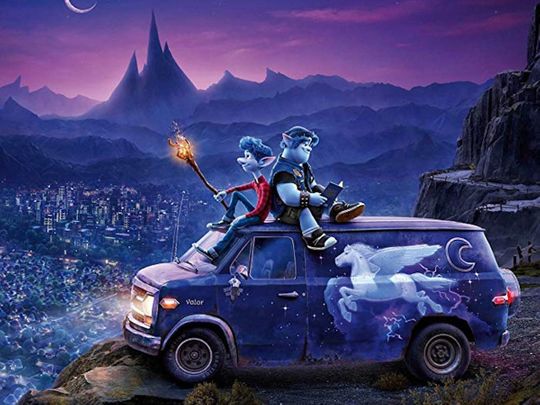 In Pixar’s new film ‘Onward,’ a pair of teen brothers seek to reconnect with their deceased dad — the kind of family-nested quest that has spawned some of the studio’s most moving moments across a quarter-century.

“There are many ways into the subject of loss,” says ‘Onward’ producer Kori Rae, noting that Pixar characters are sometimes preoccupied with universal questions: “Who are our parents? Who are we? What is the meaning of loss?”

Although Pixar does not lean on parental death as storytelling device to the degree that classic animated Disney films do (‘Bambi’ and ‘Cinderella’ lead a long list), the studio has often disappeared a mom or dad — either temporarily or permanently — to further the narrative.

The poignant longing for a relative needn’t always be a parent, naturally; 2017s Oscar-winning ‘Coco’ centres on an aspiring boy guitarist whose accidental journey to an Day of the Dead-inspired afterlife involves meeting his great-great-grandfather.

Yet more often than not, that primal connection is to a missing parent. Sometimes, such as in the emotionally affecting ‘Up,’ the dynamics of that absence are deployed more subtly; other times, such as in ‘Finding Dory,’ the disappearance is crucial to driving an entire narrative.

Here are the seven most dramatic times that Pixar has employed an absent or disappearing parent to pull on our heartstrings:

During their shared highflying adventure, Carl Fredricksen becomes a grandfather-like figure to Russell the young Wilderness Explorer, who is a child of divorce. Russell talks of getting ice cream with his father, but the film paints a paternal longing. The poignancy is well-earned by the end of ‘Up,’ when it is the supportive Carl — and not the boy’s father — who is seen onstage at the ceremony where Russell gets his Assisting the Elderly badge.

When bored family man Mr Incredible disappears on an island while moonlighting as a superhero, his wife Elastigirl and two of their stowaway children, Dash and Violet, must leap into action to rescue the spandexed daddy. Although the separation is brief, it helps propel the plot and heighten the sense of family bonds.

Sixteen-year-old Ian and elder elf brother Barley go on a supernatural trek to spend a day with their long-dead father — much of it with only the mystical bottom half of their dad, since he’s often represented by just a pair of khaki pants. Call it ‘The Brotherhood of the Traveling Pants’ (anything but ‘Two and a Half Men’). For much of the movie, on an emotional level, even half a dad is better than none.

In a setup that has a strong ‘Lion King’ vibe, Arlo, the runt of the prehistoric family, sets off on a journey after his father Henry is killed trying to save him in a ravine during a flash flood. Once again, parental death = personal quest.

This sequel echoes aspects of the original (see below) as Dory, the forgetful blue tang, is spurred on an oceanic adventure by flashbacks to Morro Bay, California, where she was separated from her parents as a child in an unfortunate game of hide-and-seek. Dory’s memories of those moments are especially affecting.

Merida, the would-be Scottish princess, bridles against family expectation, but the magic she resorts to turns her mother, Queen Elinor, into a bear — with the threat of the change becoming permanent. (Much like ‘Onward,’ a parent is present but in supernaturally altered form.) The film’s adventure turns on the daughter’s self-discovery in the face of such loss.

Pixar’s first aquatic quest stacks the deck with two types of parental loss. The early death of a clownfish’s mother makes father Marlin even more protective of son Nemo — a dynamic that leads to their separation. The desperate drive to reunite provides the film’s roiling emotional undertow.