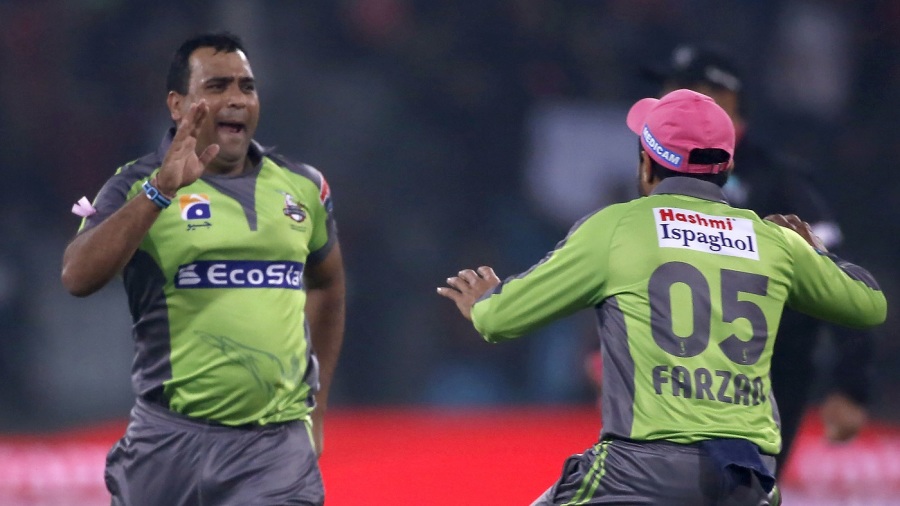 Has the PSL really moved back to Pakistan, and is this a T20 league? Today, on a pitch redolent of the most treacherous surfaces in the UAE, Samit Patel, aided by a contingent of Lahore Qalandars spinners who happened to come in handy, blew Quetta Gladiators top order away, reducing them to 21 for 6.

The pitch was ragging square, and there was little Quetta could do but cautiously bat out the 20 overs from that point on. They limped to 98, which appeared impressive in the circumstances, but when the second innings rolled around, Quetta’s slower bowlers simply didn’t possess the same bite. A 62-run partnership between Mohammad Hafeez and Ben Dunk put any early fears to rest, and Lahore cantered to a crushing win with 8 wickets and nine overs to spare.

Well, where did this surface come from? The last two days have seen Lahore peppered by intermittent rain; it was responsible for the abandoned game between Multan and Karachi last night. And when the fast-improving Shaheen Afridi’s exceptional first over saw Shane Watson depart for a golden duck, it looked as if the strip would favour bowlers who could move the ball at pace far more than the spinners.

But that’s where Patel came in. The first ball to Jason Roy looped and beat the outside edge; it was a harbinger for what was to follow. Roy would be removed by an identical delivery that beat him so comprehensively he actually had to check with the keeper to confirm it had dislodged his off bail. It was one of four wickets Patel took, with his figures reading a 4-1-5-4.

From thereon, Quetta hunkered down and focused on batting out the overs, Sohail Khan biding his time and cashing in towards the end. When he hit Dilbar Hussain for 18 in the 18th over, it seemed like a match-turning moment. However, there was no one in the Quetta ranks who played the superhuman role Patel had for Lahore, with the early bedlam responsible for consigning them to a fourth successive defeat.

There is no doubt the surface was a dream to play on, but it is notable Patel’s performance so far exceeded those delivered by any of his peers. There wasn’t a delivery that didn’t hit the spot, Patel confident enough to give it plenty of flight, continuously bringing the outside edge of the right-handers in play.

That is how Sarfaraz Ahmed fell, nicking off to first slip for 1, but the over that took his spell from magnificent to history-making was yet to come. In his third over, he was a walking highlights reel, the aforementioned Roy dismissal kicking it off. It would get better from there, Azam Khan’s outside edge carrying to Ben Dunk in a near-identical manner to Sarfaraz’s. The final ball, Ben Cutting’s first, was arguably the only loose delivery of the spell, a long hop the Australian looked to dispatch to cow corner. But Patel had the Midas touch going, and Cutting failed to get elevation onto the shot, and pulled it straight down midwicket’s throat.

This left Quetta at 21 for 6, and if Patel hadn’t run out of overs, you’d assume they wouldn’t have got close to the 98 they ended up posting.

Hafeez and Dunk play their part

Never underestimate Lahore’s ability to navigate a pathway to defeat, no matter how impregnable their position. And when Quetta set them 99 to chase, the perception was they had managed a comeback of sorts, and with momentum – and a trio of especially capable spinners in Fawad Ahmed, Mohammad Nawaz, and Zahid Mahmood – on their side, the chase could become particularly tricky. Aside from a second over in which Fakhar Zaman pillaged 20, that is exactly what it might have turned into. Zaman fell to Nawaz, his fourth dismissal to spin in this season, and two overs later, the captain Sohail Akhtar, who had never quite got going, was beaten in the air and stumped.

This was exactly the sort of scrap Quetta wanted, but Hafeez and Dunk would not let that happen. After cautiously getting themselves in for a couple of overs, they turned the chase around with 15 runs off a poor Fawad over. Quetta fell away after that, never quite able to wrest back the control they believed their spinners would grant them, and with the pressure reducing after every boundary, the fight sapped out of the defending champions relatively quickly. It would take just 4.5 overs for the final 60 runs to be scored, and when Hafeez sealed it with a six over cover, it was just an exclamation mark on a convincing – and complete – Lahore performance.

For the first time in PSL history, Quetta have lost four on the bounce, and drop to fifth – outside the cut-off for qualification. The only side below them is the one they beat, Lahore, who now have two wins in six matches.