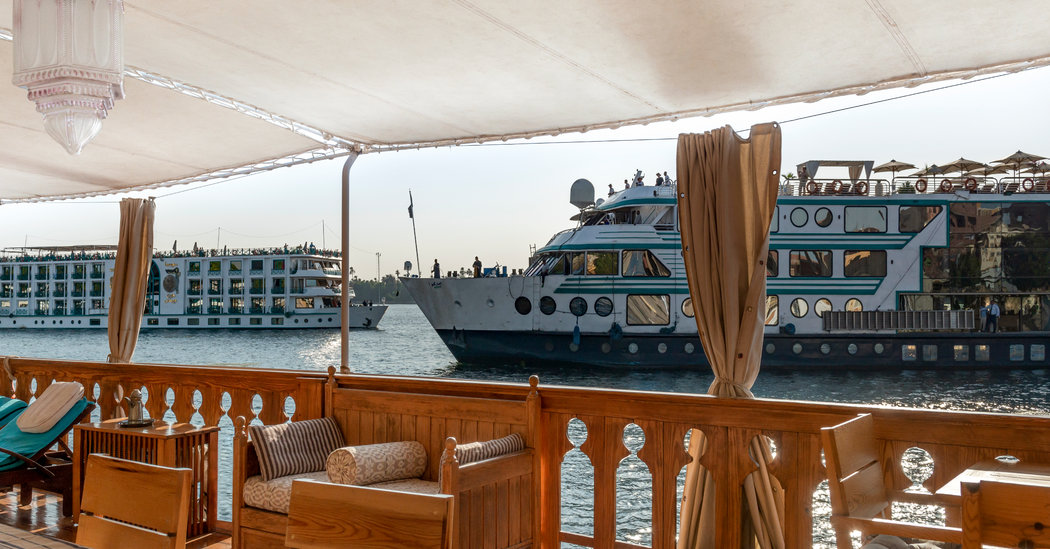 CAIRO — Twelve crew members aboard a cruise ship on the Nile were placed in isolation on Friday after testing positive for the coronavirus, Egypt’s health ministry said.

The crew members were asymptomatic, meaning they had no signs of illness, and the ship was moved to a remote stretch of river, 15 miles from the tourist hub of Luxor, to be disinfected.

Yet this sudden surge of cases, the largest cluster yet in Egypt, stoked growing fears among a nervous Egyptian public of a much larger number of infections in their country than the government has either detected or declared.

Until Friday, Egypt, which relies heavily on tourism and has a weak health care system, said it had discovered just three coronavirus cases in the country, and only one was an Egyptian. But in the past week, at least 26 tourists have tested positive for the virus after returning from vacation in Egypt, including 11 Greeks, seven Americans and six French.

At least three of those tourists traveled on the Nile cruise ship, named in the local media as the A Sara.

Egyptian health officials said the infection started with a Taiwanese-American woman who traveled on the cruise ship in late January and left Egypt on Feb. 1. The 12 crew members became infected as did a husband and wife from California who traveled on the same ship in mid-February and have since been hospitalized.

It was unclear if the 12 affected crew members had continued to work on the boat through the month of February. If they did, it opened the possibility that they had spread the virus to other tourists or Egyptians working along the Nile.

In Texas, seven Houston-area residents who tested positive were part of a tour group that had traveled to Egypt in February. It is not known if they traveled on the Nile.

In the past week, the coronavirus has emptied many of Egypt’s most famous tourist sites including the pyramids and the ancient temples that line the Nile. Egyptian officials insist they have been transparent in their efforts to stem the spread of the virus in a country where the majority of its 100 million people live along the Nile.

The government has tested about 2,000 people including, it said, many of those who came into contact with the affected tourists. But officials are also battling fierce skepticism among ordinary Egyptians about their efforts.

With much of the news media under the government’s thumb, many Egyptians are turning to social media, which has been awash with jokes about the coronavirus in recent days.

Many jokes center on the idea that officials are either hiding the truth about the extent of the virus in Egypt or are too incompetent to find it.

One Twitter post, featuring an image from the TV series “Chernobyl,” shows a Soviet official inside the ill-fated nuclear plant, saying: “I am telling you there is no coronavirus here.”

Egyptian officials have themselves to blame. Under President Abdel Fattah el-Sisi, the government has repeatedly tried to obfuscate the truth about events that might reflect badly on them, even in the face of evidence to the contrary.

In 2015, the government initially denied that a terrorist bomb brought down an airliner over Sinai, even though Russia and Britain said the Islamic State was responsible.

After an EgyptAir passenger jet plunged into the Mediterranean in 2016, killing all 66 people on board, Egypt blamed a bomb, then slowed the official investigation of the crash. A French investigation recently concluded it was caused by a technical fault exacerbated by safety lapses at the airline.

In August, the authorities tried to claim that a car crash was responsible for an enormous explosion outside a Cairo hospital that killed 20 people, only to admit a day later that terrorism was the cause.

This time, though, Egyptian officials have stressed the integrity of their approach. The government has set up a website to document its efforts against the coronavirus, which the World Health Organization in Egypt has publicly praised.

Some opposition groups have claimed, without much evidence, that the government is hiding coronavirus infections or even secretly treating patients at military hospitals.

A W.H.O. spokeswoman in Cairo declined to answer any questions, and referred them to Egypt’s health ministry.

Even with an honest effort, though, Egypt’s campaign to contain the spread of the virus may be compromised by its own health system.

While Mr. el-Sisi has poured billions of dollars into ambitious projects like the sprawling new capital under construction outside Cairo, or a sleek national museum that is scheduled to open later this year, his government has been criticized for the underfunding of crumbling public services. including health care and education.

Many public hospitals are in a poor state, raising questions about whether doctors have the means to detect the virus in a timely manner — or to treat it in the event of a large number of infections.

Regional rivalries have also become a factor in Egypt’s coronavirus fight. This week, the government barred all citizens of its Gulf rival, Qatar, from entering the country, days after Qatar, which has 11 declared cases, imposed a similar ban on Egyptians.

But the outbreak has given Egypt a chance to hone its ties with China, which is building part of the new administrative capital. Last week Mr. el-Sisi dispatched his health minister, Hala Zayed, to Beijing to liaise with Chinese officials.

On her return to Egypt, Ms. Zayed praised China’s efforts to contain the virus.

That same evening, in a sign of solidarity, Egypt projected China’s flag onto historical monuments including the temples of Karnak and Philae in the south, and the Citadel of Salah al-Din in Cairo.

As has now become clear, though, some tourists visiting those temples in recent weeks were themselves stricken with the virus.