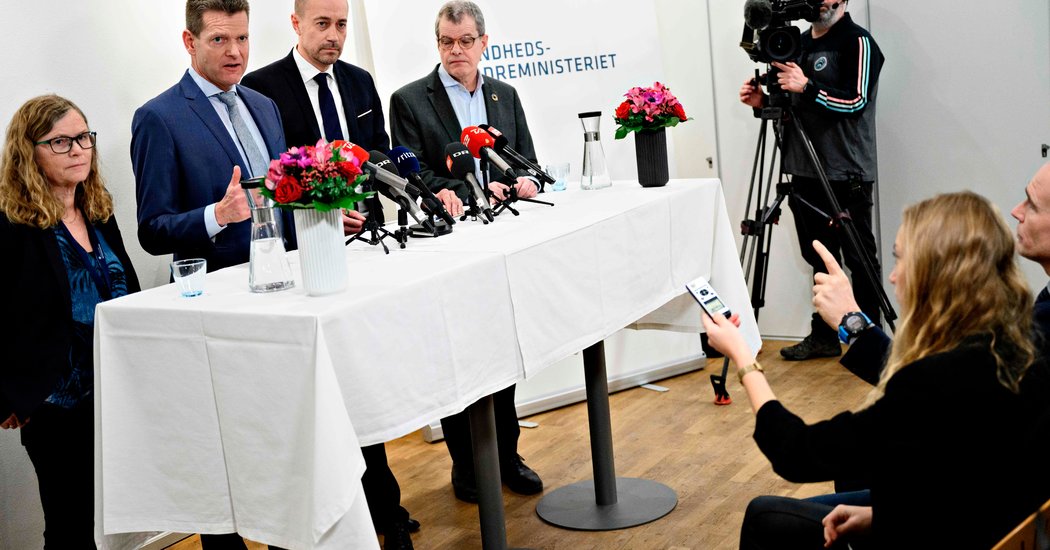 LONDON — The mayor of a city in Eastern Denmark was preparing to hold a citizenship ceremony when he received a call from the country’s immigration and integration ministry.

The ceremony on Friday had to be postponed, the ministry told Henrik Hvidesten, the mayor of Ringsted, a city of 35,000. That’s because naturalization ceremonies require handshakes by law to complete the process, and the health authorities had recommended that people avoid shaking hands to help contain the spread of the new coronavirus.

The new coronavirus, which has caused more than 200 deaths in Europe and infected thousands across the Continent, has forced governments to shut down schools, cancel sports events, issue travel restrictions and ask countless people to self-isolate if they are suspected of being infected. In Denmark, which has reported 23 cases, it now means that hundreds of people about to become Danish citizens will have to wait until shaking hands is deemed safe again.

Fourteen people were expected to become Danish citizens in Ringsted, Mr. Hvidesten said in an interview on Saturday. “Some were unhappy, and we were very sorry. It was a day they had been looking forward to.”

The handshake requirement, which was adopted by conservative Danish lawmakers and those from the populist Danish People’s Party in 2018, was widely criticized by opponents as an anti-immigration measure targeting those who might refuse to touch members of the opposite sex because of religious beliefs, especially Muslims.

Denmark is not the only European country to have such a rule. In 2018, a French court ruled that a refusal to shake hands with male officials at a naturalization ceremony was sufficient grounds for denying citizenship to a woman from Algeria.

On Friday, as the number of virus cases rose across Europe, public officials in Denmark debated whether handshake exceptions could be made until the country tackled the epidemic. The 2018 law requiring handshakes at naturalization ceremonies includes a provision prohibiting gloves, so that is not an option.

But government officials said there would be no exception to the handshake for those who want to become citizens.

It was not clear how long the suspension would be in place or if all local mayors would follow the recommendation.

“Of course, this is a sad situation for those who now have to wait to become Danish citizens,” Mattias Tesfaye, the country’s immigration and integration minister, said in a statement. “But we take the health authorities’ recommendation seriously. In this situation, we as a society must show unity to limit the spread of infection.”

Local officials in Denmark hold at least two naturalization ceremonies each year, the conclusion of a lengthy process for thousands of people in which the requirements include having residence for up to nine years, passing tests on the Danish language, politics, history and society, and being financially self-sufficient.

Some mayors have circumvented the handshake law by having both male and female officials take part in the ceremonies. “It’s against my ideology and conviction to have to force other people to have body contact,” Thomas Andresen, the mayor of Aabenraa, a town near the border with Germany, told The New York Times in 2018.

For many, the postponement recommendation this past week was the latest incongruity in a law that they have found exclusionary.

“It’s absurd,” said Peder Hvelplund, a socialist and green lawmaker, said in an interview. “The path to Danish citizenship should be about inclusion, not exclusion.”

The delay could deprive some of their citizenship, Mr. Hvelplund added, because children under 18 who could have become Danish through their parents’ naturalization would most likely have to start over if they aged out.

“Some will likely have to undergo the process themselves,” he said.

Mayor Hvidesten of Ringsted said he had been taken by surprise when he received a call from the ministry, two hours before the ceremony on Friday.

“We should have made some kind of exceptions; we could have done it without the handshake,” he said.

Other Danes responded to the new rule by offering their own alternatives.

Sofie Carsten Nielsen, a leader of the Danish Social-Liberal Party, suggested on Twitter that people replaced the handshake with the Namaste gesture, pressing hands together.