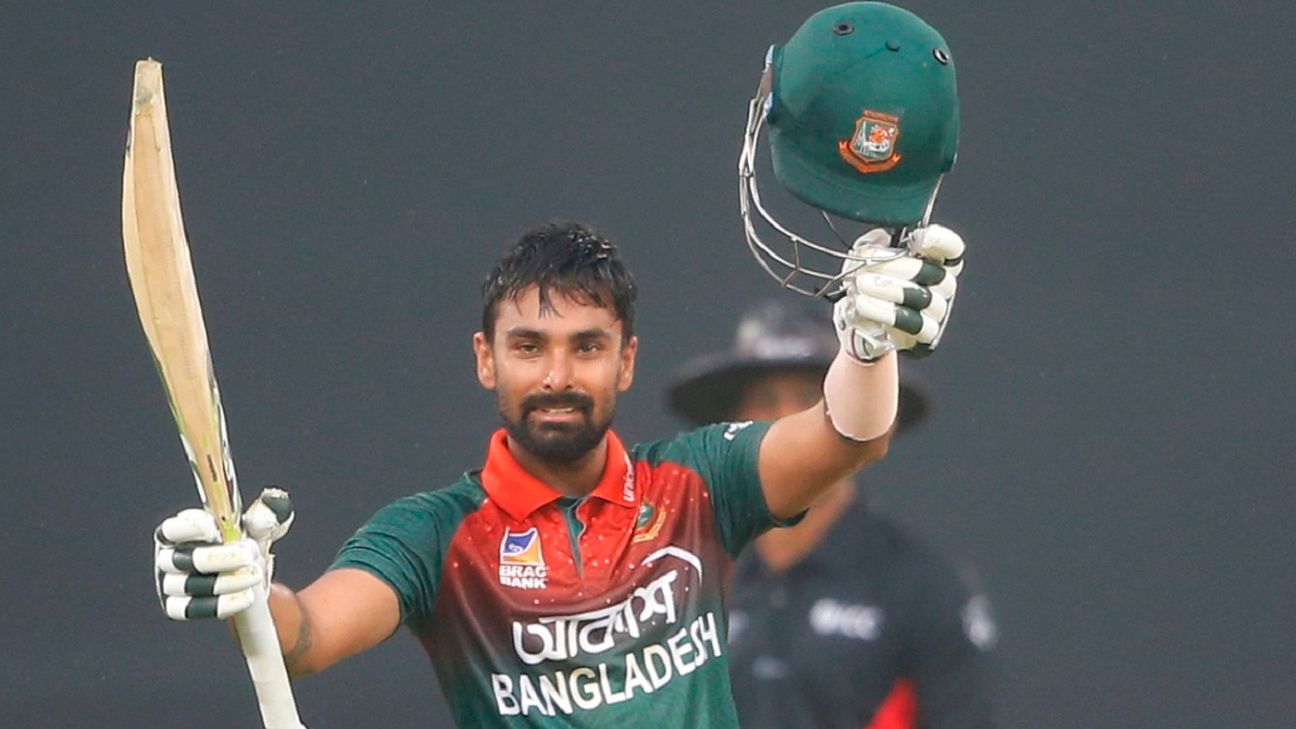 When Liton Das crossed 158 in the third ODI against Zimbabwe on Friday with the crowd in Sylhet having a party, Bangladesh’s highest individual score in ODIs was his property now. He got a big hug from Tamim Iqbal, the man who had set the record just two days ago. But it was also Iqbal, according to Das, who reminded him around the 120-run mark that the record was for his taking, and he shouldn’t leave the chance. Das went on to finish on 176 off 143 balls that helped the hosts amass 322.

Das said that twice during their record 292-run opening stand, Iqbal’s words motivated him greatly. The first was when they struggled to find singles for a brief period and Iqbal calmed down Das. And then when Das was on 120, Iqbal charged him up.

“When I was batting on 80, the bowlers were going through a good time,” Das said after the game. “Neither of us could find the singles. Tamim bhai said that we can overcome this situation. We will get the runs and the boundaries, our batting will become normal. This was before my hundred. When I was around 120-122, I was going after the bowling. Tamim bhai reminded me that this was my chance to cross his highest score. ‘Do something that will last for a long time’, he told me.”

Das said that despite the big-hitting finish to his innings, the thought of reaching a double-hundred never crossed his mind. He just reacted to the situations, particularly after the rain break when Bangladesh were 182 for 0 in the 34th over, and the match was reduced to 43 overs a side. Das scored his last 76 runs off just 29 balls, with the help of eight sixes and three fours.

“The double-hundred was never on my mind,” Das said. “I wanted to bat till the 30th over but after the century the momentum of the match changed. I had to play my shots, and I was successful. There became a bit of a chance. As a batsman, I have the belief that if I can bat for 30 overs, I can get a hundred.

“It is one of my best knocks. I always performed at the domestic level, but there were problems at the international level. My playing style was different. I am working on it, but I am sure that I can do better in the future.”

Mashrafe Mortaza, the outgoing captain who always banked on a good opening stand but had to work hard to find a better partner for Iqbal throughout his captaincy, said that Das is certainly reaching his peak as a batsman.

“I always love watching Virat Kohli and Liton Das,” Mortaza said. “There’s a lot of great players but as long as these two are at the wicket…I have told Liton for a long time. I believe that Liton can change the momentum of an innings, he can play an anchor role, and he can also play a big innings.

“I think that he has picked the momentum. He understands his game now. He has played for four years, and this is his peak time to score runs. His hundred in the Asia Cup final was his natural game.”

Mortaza said that the first time he found confidence speaking to Das was couple of years ago in the West Indies when the young batsman was struggling to break into the playing XI. Mortaza had decided to give Anamul Haque a fair go to open with Iqbal, but Das stuck to his guns, and only wanted to open. It impressed Mortaza.

“Liton told me once, in West Indies when Bijoy (Anamul Haque) opened in all three games and he didn’t get a game, that he wanted to bat in his best position. He had made runs in the practice game but we decided to stick with Bijoy in that whole series.

“Naturally, Liton was disappointed. But he told me that he if he fails at his preferred batting order, he would take the responsibility. We spoke for about 30 minutes, and it gave me confidence in him.

“I saw a young player taking responsibility, so I told him that next time whenever you bat for Bangladesh, I will make sure you open the innings.”

A captain perennially worried about his batting line-up, and in particular the opening pair where only Iqbal has been consistent, Mortaza will be satisfied that by the time he finished as captain, Bangladesh at least had an exciting opening pair, and one that comes with a lot of promise.