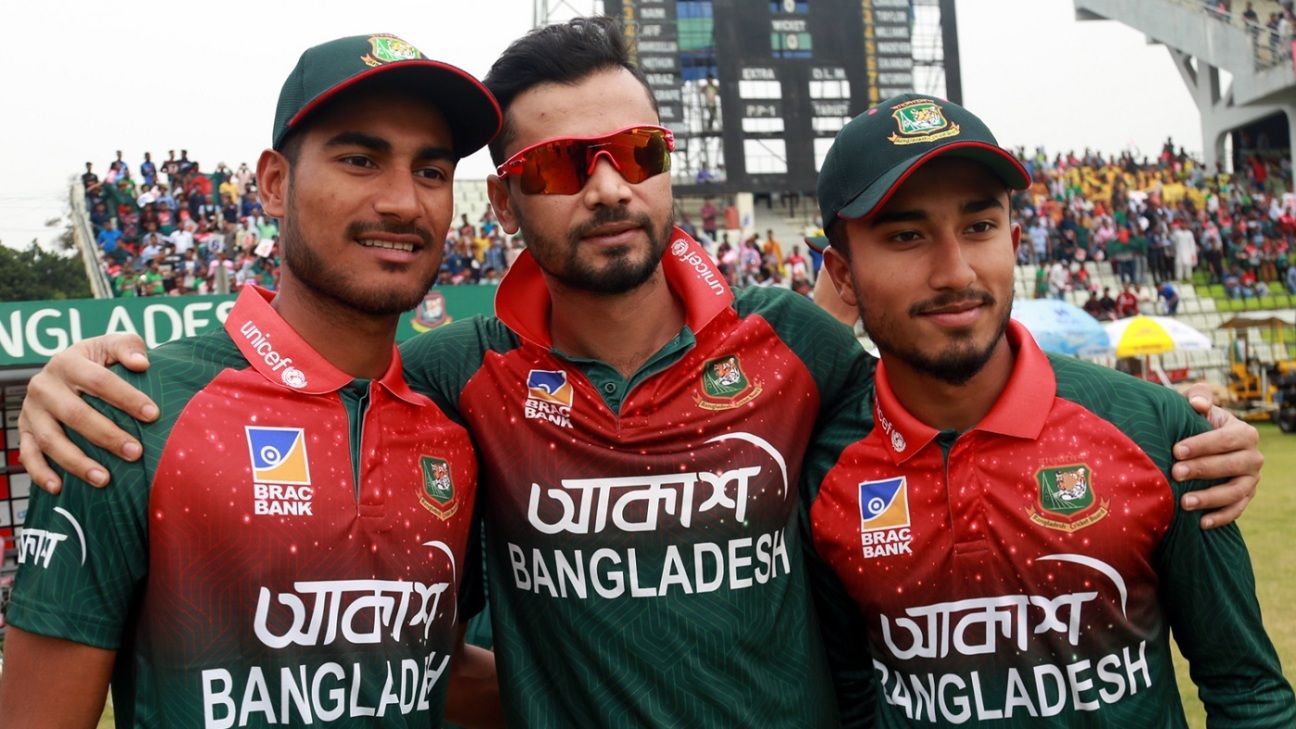 In his last ODI as captain of Bangladesh, Mashrafe Mortaza wanted to make sure he did not slip up even once, being aware that players are “vulnerable” to mistakes when they are ending a stint. Mortaza signed off as captain in style, leading Bangladesh to their 50th win under him in ODIs with a 3-0 whitewash over Zimbabwe in Sylhet. After Liton Das and Tamim Iqbal amassed big hundreds, Mortaza provided the first breakthrough in Bangladesh’s defence of 322 and remained in control of his emotions throughout the game.

At one point he even allowed Mustafizur Rahman to keep a slip in the dying stages of the game, resulting in a catch the next ball. His open faith in his players, young and old, was one of the hallmarks of his captaincy.

After the game ended, Iqbal picked him up on his shoulders for a lap of honour. The Bangladesh players wore special jerseys with his name and number at the back, and “thank you captain” written in the front. They presented him with a special edition jersey as well as a commemorative plaque. There are also strong rumours that Mortaza’s jersey may be retired by the BCB soon.

After all the formalities, Mortaza cut a relaxed figure in the press conference, particularly candid when speaking about his experience as one of the most important figures in Bangladesh, for more than five years.

“Now I am feeling relaxed,” he said. “There’s one less thing to worry about. It was a big responsibility. Usually at this time, some feel good some feel bad. I have mixed feelings too. To be honest, I am happy that I could finish well as a captain. I also ended on a win.

“Our main focus was winning the game. We planned and thought about the match. We knew that everything would have been spoiled had we lost. We had a big score but I didn’t want to make a mistake today. When a person announces that something has ended, he is vulnerable to making mistakes. He knows there’s no one to answer to afterwards. I was really focused on not making any mistakes. Everyone assumed that this was a straightforward win, but I wanted to finish well.”

Mortaza took four wickets in the three ODIs against Zimbabwe, a stark improvement from his last campaign – the 2019 World Cup – when he took just one wicket in 56 overs across eight matches. He said that wickets have obviously given him some confidence, and he wants to keep performing.

“I had a really bad World Cup, and the team struggled too,” he said. “I have turned around a bit. It is about time that I regained the confidence. Bowlers get confidence through wickets, notwithstanding how we bowl.

“I have to perform. It will be up to the selectors. A player has to play well, and then he becomes the captain, which itself is a huge pressure. But now as a player, I have a lot of time to think about myself which will help me a lot.”

Mortaza downplayed his performance as a captain and said that a Bangladesh captain has to deal with a lot more off-the-field issues with players. “I never evaluated myself, I think I am an average captain,” he said. “I have never given it any thought. For a captain in Bangladesh, though, there’s a lot more work off the field with players. Once you are in the field, there isn’t as much to do.

“But players are disturbed in many ways: personal problems, being out of form, not going on well with the coach, fitness problems. Everyone has a different struggle. The captain has to be with the player during those times. The captain has to take responsibility of the whole team, regardless of the team’s result.”

Mortaza also reiterated that a senior player should be given the ODI captaincy now, as he would have the prerequisite experience to handle high-pressure situations on and off the field.

“Captaincy was a big responsibility but whoever comes in next, he has to be three times more sensible and thoughtful. It will be easy when he wins, but when you lose there is a lot of pressure from the media, board and spectators.

“I have done it for six years, so I feel relaxed now. Which is why I said that one of the senior cricketers should take over the captaincy. They can face the media, and have played for a long time. They can better handle pressure.”

Mortaza was hopeful that Bangladesh will keep improving beyond his stint as the ODI captain. He repeated what he had said at his last press conference in the 2019 World Cup, that with many of the current young players reaching a peak in four years time, Bangladesh could make it to the last four of the next World Cup.

“It is hard to say but I believe Bangladesh will do well in the 2023 World Cup. I think I said it in the last press conference in England, after the Pakistan game, that we will play in the semi-final of the next World Cup. Most of the young players will have the peak of their career during that time, so there’s no reason that we cannot reach that far in Asia.”