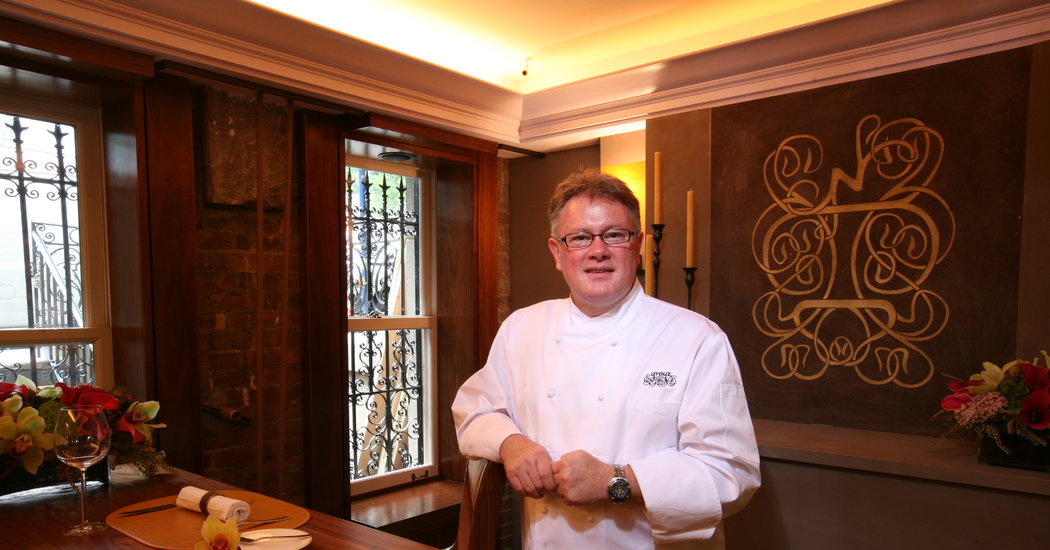 Gray Kunz, the Swiss chef who grew up in Singapore, cooked in Hong Kong and broadened New York’s vision of fine dining in the 1990s at the luxurious Manhattan restaurant Lespinasse, died on Thursday in a hospital in Poughkeepsie, N.Y. He was 65.

The cause was a stroke, a representative for his family said. Mr. Kunz had homes in Brooklyn and Clinton Corners, in Dutchess County, N.Y.

After a traditionally rigorous culinary apprenticeship in Switzerland that began at age 16, Mr. Kunz led kitchens in Hong Kong, New York and Shanghai.

In 1994, his cooking at Lespinasse received a four-star review from The New York Times restaurant critic Ruth Reichl, who cited its “Old World” comforts combined with “aggressive” and “exciting” flavors.

At his death, he was in charge of two restaurants, both called Café Gray Deluxe, in Shanghai and Hong Kong.

Gray Kunz was born on Feb. 24, 1955, in Singapore and spent his first decade there, where his Swiss father and Irish mother lived at the time. Malay was his first spoken language, and he learned about food in Singapore’s markets and food stalls, which he credited with developing his palate in ways that pushed him beyond the confines of his European training.

Asian ingredients were not entirely new to American fine dining in 1994. Soon after he arrived in New York in 1992, Florence Fabricant of The Times mentioned Mr. Kunz in an article titled “Lemon Grass in the Ragout? Asian Spices Enter French Cooking.”

But few Western chefs had as much expertise in the cuisines of Asia as Mr. Kunz, who worked in Hong Kong’s Regent hotel for five years after leaving Switzerland and spoke Cantonese along with French, German and English.

“No one else was doing curried ragout of squab with a mung-bean crepe and tamarind broth,” or using ingredients like Tamarind and Makrut lime in fine dining, said the New York chef Andrew Carmellini, who worked at Lespinasse from 1992 to 1996. “Every young chef wanted to learn from him.”

Other alumni of Lespinasse, housed in the St. Regis hotel on East 55th Street off Fifth Avenue, include the chefs Corey Lee of Benu in San Francisco and Rocco Di Spirito and Floyd Cardoz in New York.

Mr. Kunz was also a leader in vegetable-forward menus and local sourcing of ingredients, having trained with Frédy Girardet in Crissier, Switzerland, one of the first fine-dining restaurants to boast its own on-premises garden.

People who worked with Mr. Kunz often cite his combination of exactitude and kindness. Jimi Yiu, an architect and frequent collaborator, said it was chronic perfectionism that had forced Mr. Kunz to invent a cooking tool that has become standard equipment for young chefs: the wide-handled, shallow-bellied “Kunz spoon,” used specifically for making and plating sauces.

“He went through every spoon in every kitchen, but none of them had just the right size, shape, and weight,” Mr. Yiu said.

After leaving Lespinasse in 1998, Mr. Kunz waited more than five years to open his first eponymous restaurant, Café Gray, planned as one of the culinary anchors of the Time Warner Center while the building was still under construction at Columbus Circle.

He had passed the time partly by writing his cookbook, “The Elements of Taste” (2001), with Peter Kaminsky. But Café Gray received mediocre reviews on opening in 2004 and never drew a regular following. It closed in 2008, along with Grayz, Mr. Kunz’s Midtown foray into upscale bar food.

In 2009, the restaurant was reincarnated in Hong Kong’s Upper House hotel as Café Gray Deluxe, which holds a Michelin star. A Shanghai branch opened in 2018.

Mr. Kunz is survived by his wife, Nicole; his children, Julie and Jimmy; and a brother, Kevin.