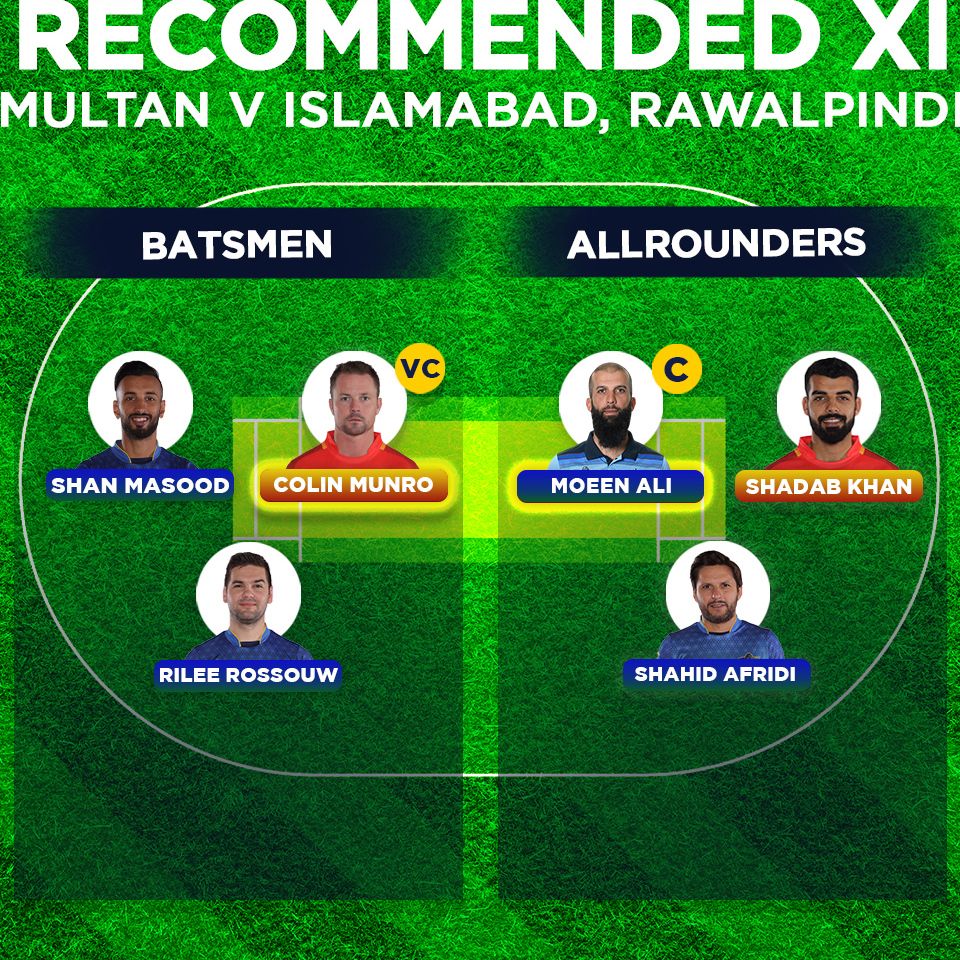 It has been an on and off tournament so far for Ali. He has made a couple of significant scores and got three wickets but that extraordinary knock that he is capable of is yet to come. We are backing him to do it against Islamabad. Since 2018, Ali has struck at 141.15 in the Powerplay and at 171.31 in the middle overs in all T20s.

Munro scored a fifty the last time he played against the Sultans. With some rain around, this could be a shortened game as well which means Munro would probably start swinging from ball one. His strike rate against pace in the Powerplay in all T20s is 146.37 and if the Sultans bring on their legspinners in the Powerplay, he strikes at a healthy 129.21 against them as well.

Rilee Rossouw: He might have failed to score in the washed out game last night but the fastest ever PSL hundred is still fresh in everyone’s memory. He has to make it to your team.

Imran Tahir: He has picked up six wickets in his last three games. He is the bowler a captain goes to when he needs wickets and Tahir’s strike rate in the tournament (14.25) is testament to that. He has a dot-ball percentage of 39.06 in the middle overs in all T20s since 2018. That is the third-best among all bowlers with at least 50 wickets in the format since 2018.

Dale Steyn: He has picked a wicket in each of the two matches he has played so far in this PSL and has also gone at less than seven an over. In all T20s since 2018, his strike rate is 14.25 in the Powerplay.

Rumman Raees: He is fresh off a fantastic performance against the Qalanders in the last game, picking up 3 for 29. He compliments the accurate Steyn well and is a wicket-taker in his own right.

Shahid Afridi: Boom boom Afridi seems to be far from done. He has picked up four wickets and at an economy rate of a touch over seven and also showed us what he can still do with the bat by scoring a 17-ball 35 against the Kings last night.

Points to note: Rain could play a part again in Rawalpindi tomorrow, so pack your team with a lot of top-order batsmen.