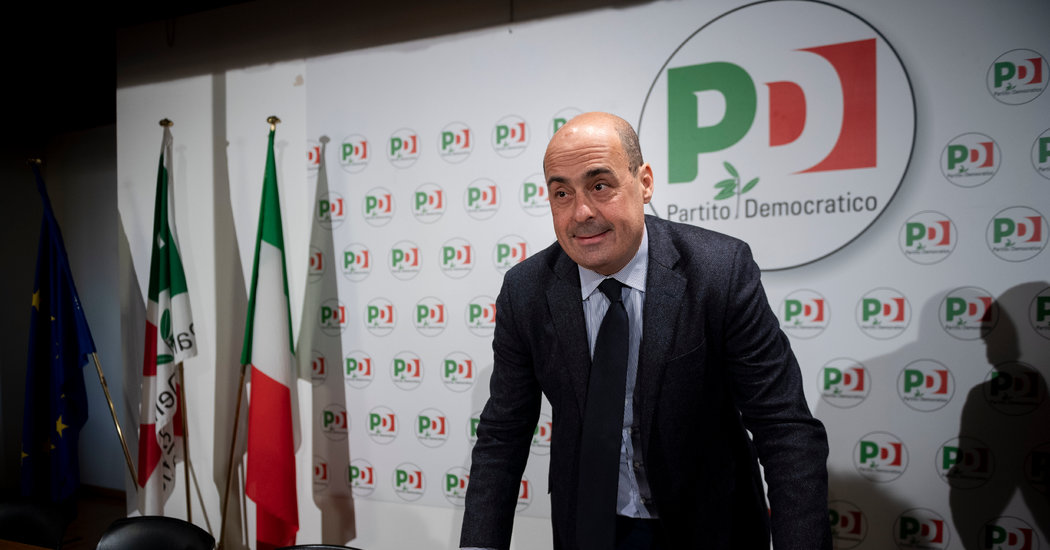 ROME — The coronavirus outbreak that has paralyzed and disrupted economic and social life in Italy spread to the top of Italian politics on Saturday as the leader of the governing coalition’s Democratic Party announced he had contracted the virus.

“Well, it’s arrived,” Nicola Zingaretti, the leader of the Democratic Party, said in a Facebook video posted Saturday that was confirmed as legitimate by a spokesman. “I also have the coronavirus.”

The infection of Mr. Zingaretti represented a new stage in Italy’s outbreak, the largest in Europe and the most deadly outside China and which had been concentrated in the country’s wealthy and industrious north.

After the government’s decision last week to close all of Italy’s school, the infection of Mr. Zingaretti, who is based in Rome, where he is also the president of the region of Lazio, provided vivid proof that the virus was no longer a matter of northern exposure, and that the entire country was now grappling with a public health emergency.

Mr. Zingaretti, the head of the country’s largest center-left party and one of the two parties leading Italy, has daily contact with the highest echelon of the political class in the capital, as well as his party’s rank and file members and the many Italians he has met on the campaign trail in the course of Italy’s regional elections.

Already some members of Italy’s Parliament who come from the locked down areas in the Lombardy region have been quarantined to try to slow the spread of the virus, but the infection of a highly prominent figure like Mr. Zingaretti raised the prospect that more of Italy’s political class had been exposed.

“Certainly a politician meets and hugs many people,” said Giovanni Rezza, director of the infective illness department at the National Health Institute. “There is a risk of diffusion.”

Elected officials privately expressed concern that the country’s Parliament, with many representatives from the infected north, could be a new theater of contagion.

In Italy, the toll rose on Saturday to more than 5,800 cases, 233 of them fatal, with increases of almost 800 infections and 49 deaths from the day before. Only China has had more people die after contracting the new coronavirus.

“I have always said no panic, we will combat this,” said Mr. Zingaretti, who has a reputation for understatement. Wearing a sweater and looking relaxed, he added that he hoped to give a “good example” to Italians by following “to the letter” the advice of the doctors and scientists. He concluded that he would continue to fight for the country, but “from home.”

Last week, the president of the Lombardy region, where most of the country’s infections have occurred, posted a Facebook video in which he put a mask on after learning one of his close collaborators had contracted the virus. Political opponents criticized the video as dramatic and unnecessarily raising alarm.

“I’m well, and so it was decided home isolation,” Mr. Zingaretti said, adding that he would separate himself, and that his family would follow all the advised precautions, as stipulated by Italian protocols for infected people. Italian health officials, he said, had already begun contacting people with whom he worked closely.

Mr. Zingaretti has held meetings at the Lazzaro Spallanzani National Institute for Infectious Diseases in Rome, which has been treating coronavirus cases. He also went there to show support to the Lazio region’s coronavirus task force, according to Luigi Telesca, a spokesman for Mr. Zingaretti, who said aides to the party leader believed he had contracted the virus there.

On Saturday morning, Mr. Zingaretti had a slight fever and felt a burning sensation in his eyes, Mr. Telesca said.

After his symptoms were reported to health authorities, they ordered a coronavirus test for Mr. Zingaretti and the result was positive.

The vast majority of those who died in Italy after contracting the virus were elderly and many had serious underlying conditions and were destabilized by the virus, according to health experts. Italy, which has won of the world’s most aged populations, has already suffered enormously from the virus, with economic production slowed or outright halted in the northern regions that serve as the country’s economic engine.

Milan, the most vibrant city in the country, has become ghostly. The service sector has been hit hard, with hotels closing entire floors for lack of business, restaurateurs looking sadly over empty tables and taxi drivers waiting in long lines for fares that do not come.

Last week the government announced a huge support package of $7.5 billion euros, or about $8.5 billion, in addition to €900 million announced last week for families and business damaged by the virus.

Churches have had to cancel mass. Schools are closed everywhere, prompting anxiety about child care, especially among working class parents who do not have the ability to work from home. Parents who do stay at home have found themselves struggling to teach division and grammar lessons.

But the virus has clearly now gained access to the more exclusive halls of power in Rome.

The Vatican on Friday confirmed its first case of the virus and shut some offices and closed its health clinic for sterilization. A Vatican official was put into a protective quarantine after a priest in Rome tested positive for the virus.

Pope Francis, 83, who lost part of a lung from a respiratory illness in his youth, has been suffering from a cold, though the Vatican has said he has no other illnesses. They have declined to say whether he has been tested for the virus.

According to the guidelines by the Italian government, Francis should limit visitors and stay home. On Friday, Francis expressed his “closeness to those who are ill” with the virus and to health care workers.

On Saturday, the Vatican announced that the papal events in St. Peter’s Square that are typically open to the public, including the pope’s Sunday blessing and the Wednesday general audience, will instead be live streamed from the library of the Vatican’s apostolic palace “to avoid the risk of spreading” the virus, a Vatican statement said.

After Mr. Zingaretti announced his illness, expressions of solidarity, a rare element in Italy’s bitter and divisive politics, came from across the political spectrum.

“My hope for a speedy recovery,” Matteo Salvini, the leader of the nationalist League party, who has criticized the government’s response to the crisis and sought to cause the coalition’s collapse, said on Twitter. “It’s not normal to do polemics when health is in question.”