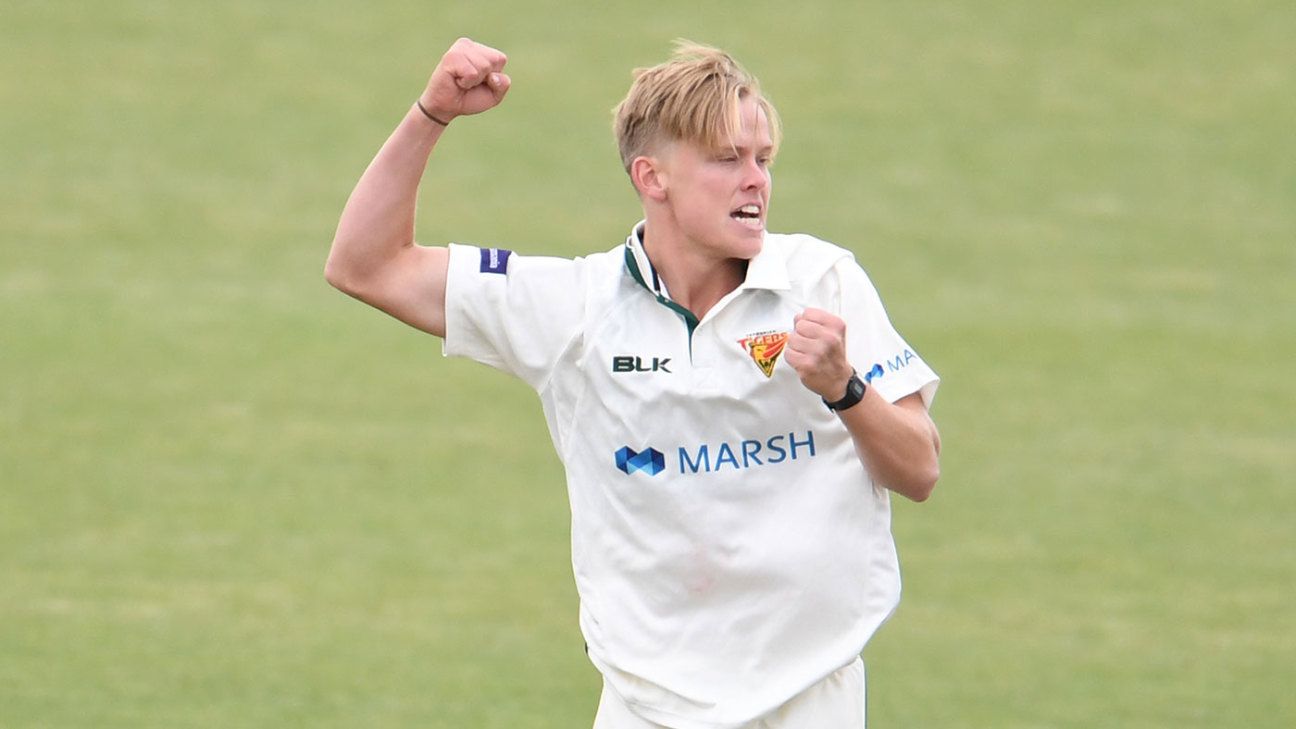 Nathan Ellis took his second consecutive six-wicket haul as the bowlers dominated on the opening day between Tasmania and New South Wales in Hobart. Ellis’ 6 for 43 helped bundle out the runaway Shield leaders for 195, but they fought back in the final session as Sean Abbott took three wickets.

Ellis claimed his first of the day when Daniel Solway was given lbw to a ball that may have gone past leg stump then continued to work his way through the New South Wales batting. Nick Larkin’s 45 was the top score and he fell when he nicked a very wide delivery from Gabe Bell who collected the other four wickets.

Abbott helped even up the ledger before stumps, starting with a diving caught-and-bowled to remove Alex Doolan when an inside edge ballooned off the pad back to the bowler. Jordan Silk was lbw playing no shot and Jake Doran edged a drive into his stumps.

Sam Harper struck a half-century on his return from the concussion he suffered during the Big Bash on an evenly-fought opening day in Adelaide. Harper’s half-century lifted Victoria to 292 after a middle-order wobble which had seen them lose 5 for 53 from being 1 for 137. Daniel Worrall and Joe Mennie took four wickets apiece.

Half-centuries from Marcus Harris and the prolific Nic Maddinson had set a strong base for Victoria who are continuing to push for a chance to defend their title in the final. However, things fell away after Harris picked out point off Wes Agar. Peter Handscomb fell cheaply when he edged a lifter to second slip and Maddinson was caught at long leg in extraordinary fashion when Mennie fell over before the ball reached him, but he managed to retain the composure to hold the catch. A seventh-wicket stand of 90 between Harper and Peter Siddle steadied the innings before another late slide saw Victoria’s last four wickets go for 12 runs.

Michael Neser and Cameron Gannon picked up four wickets apiece as Western Australia, who had a number of batsmen getting starts but a best of 51, folded for 277 across in Perth. Once the bowlers were done, Queensland openers Bryce Street and Joe Burns ensured there were no late setbacks, batting out the four overs before close of play.

Asked to bat, WA got off to a decent start courtesy Jake Carder and Sam Whiteman, who put on 34 for the opening wicket, and then a Whiteman-Shaun Marsh stand of 76 for the second wicket. But things started unravelling quickly after that, especially once Whiteman was sent back by Neser for 51. From 4 for 169, WA were quickly reduced to 8 for 185 and then 9 for 209 as Gannon, in the main, and Neser made merry. It was only because of some big-hitting from No. 10 Josh Nicholas, who scored a 42-ball 44 with six fours and two sixes, and David Moody’s 31 not out in 59 balls from No. 11 that WA reached a respectable score.