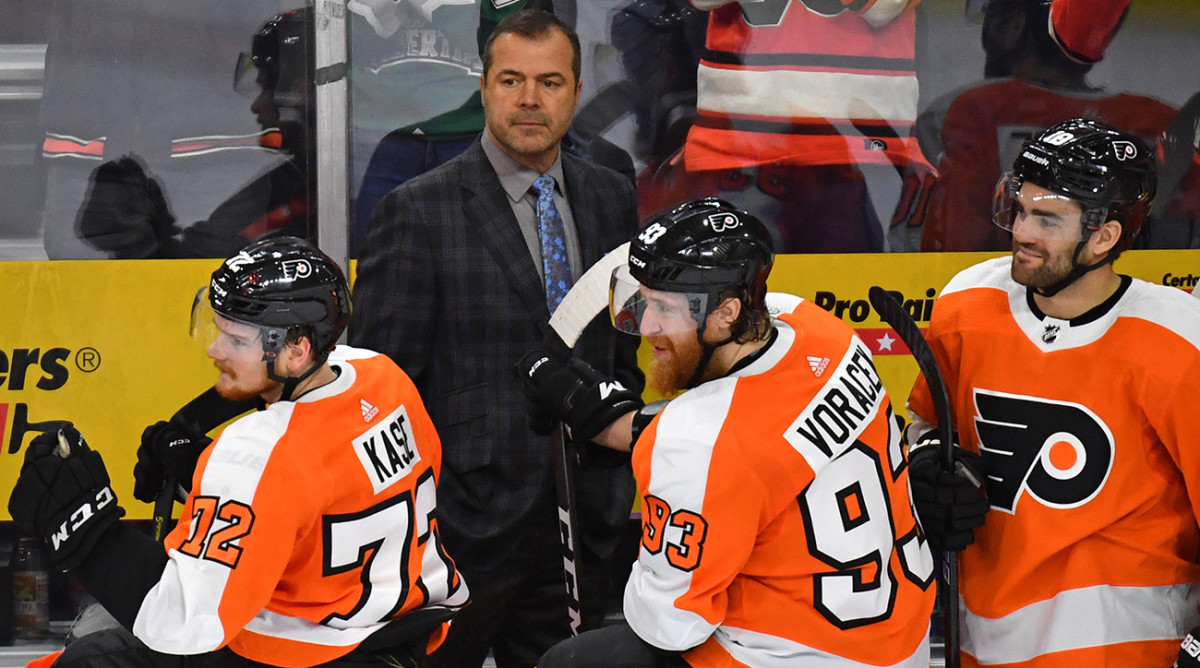 For the vast majority of the campaign, as the Washington Capitals have clung to their spot atop the Metropolitan Division, the Pittsburgh Penguins defied all manners of injury, the Tampa Bay Lightning surged up the standings and the Boston Bruins padded their lead in the Presidents’ Trophy race, the Eastern Conference has been viewed by some as a battle between only a handful of legitimate Stanley Cup contenders.

Sure, there are others in contention. The New York Islanders, before a recent slide, were a divisional threat. The Toronto Maple Leafs have all the talent to get the job done. The Carolina Hurricanes, too, seem built for the post-season, though they wake up Thursday on the outside of the wild-card race looking in. Even bubble teams such as the New York Rangers and Columbus Blue Jackets, who are hanging on despite an overflowing infirmary, have gotten their share of ink.

And amid all of that, the Philadelphia Flyers have largely–pardon the pun–flown under the radar.

There could, of course, be any number of reasons the Flyers haven’t grabbed national headlines throughout the season. Prior to colleague Steven Ellis’ highlighting of Travis Konecny’s breakout campaign, there hadn’t been a single Flyers-focused piece around these parts since the late stages of October. That’s not at all because Philadelphia has been poor, either. They haven’t. Rather, it’s because the Flyers have simply been overshadowed by the performances of the clubs around them. There was Alex Ovechkin’s 700th goal and John Carlson’s incredible performance for the Capitals, the Rangers’ unexpected surge, the Penguins’ aforementioned injury battle and the list goes on. Meanwhile, it has felt as times as though the Flyers have ho-hummed their way through the campaign.

Wednesday night in Washington, though, Philadelphia seemed to plant their flag in the ground and state, once and for all, that it is high time we start giving them their due.

In a battle between the Flyers and Capitals, Philadelphia may have surrendered the first goal, but the Flyers scored three consecutive en route to an eventual 5-2 victory that trimmed the Capitals’ division lead to a single point. But it’s not just that win that should earn Philadelphia merit as a legitimate contender. It’s what led to that victory. Entering Wednesday, the Flyers were winners of six in a row and only one of those victories was against a club that isn’t in playoff contention. Included were consecutive wins over the Blue Jackets by a 9-4 aggregate score, a 4-2 grounding of the Winnipeg Jets and back-to-back, home-and-home wins over the Rangers, who entered the first half of the set on a five-game winning streak of their own.

What has led to the Flyers’ success isn’t necessarily sexy, however. It’s not one player putting the team on his back. Instead, every player has pulled on the proverbial rope. Konecny, to be sure, has been the standout, his 24 goals and 61 points both team-leading totals. But one marvels at the depth of Philadelphia’s attack, which has the sixth-highest goals per game rate (3.33) despite not a single Flyer cracking the top-25 in league scoring. Altogether, 19 players have scored at least a dozen points for Philadelphia this season, which is tied with the Minnesota Wild for most in the league. The Flyers’ eight 30-point players is tied for fifth in the NHL, six 40-point players is tied for third and only Washington and Winnipeg, each with five, have more 50-point players than the four in Philadelphia’s lineup.

But the complete buy-in coach Alain Vigneault has gotten from his club extends beyond the attack. He has worked wonders with this group.

Defensively, the Flyers are allowing 7.6 fewer shot attempts against, 3.4 fewer shots against and 2.5 fewer scoring chances against per 60 minutes at 5-on-5 compared to last season. The result is a three percent increase in Corsi percentage, three percent increase in shots percentage, 2.9 percent increase in scoring chance percentage and a 1.9 percent increase in expected goals percentage. Philadelphia ranks ninth, 10th, 12th and 16th in the respective categories after finishing 21st, 23rd, 22nd and 18th last season. Having a brilliant two-way, matchup-dominating center such as Sean Couturier in the lineup is an incredible benefit, but summer additions of Justin Braun and Matt Niskanen have aided the blueline, as well. Vigneault’s far-more-limiting defensive system has been a boon, and Philadelphia’s roster is very clearly on board with what he’s asking.

Are the Flyers without their blemishes? Not at all. No team in contention is. Philadelphia’s goaltending hasn’t been the strongest, with neither Carter Hart or Brian Elliott posting better than .909 save percentages. Hart has very clearly been the stronger of the two, though, with a .916 SP at five-a-side and a goals saved above expected of 2.42, which is tied for 16th among the 49 goaltenders with 1,000 minutes played at 5-on-5, according to Evolving-Hockey. He’s been up there with the league’s best keepers since mid-January, too, though that’s an admittedly limited timeframe.

Mediocre goaltending or not, however, Philadelphia has been able execute a slow and steady rise through the standings and, now, heat up at exactly the right time. Since Jan. 1, there are only three teams in the NHL who have accumulated more points than the Flyers, only three with greater winning percentages and, as colleague Matt Larkin pointed out, teams that play good, consistent hockey followed by a stretch of excellent play into the post-season tend to be the best kind of bets come the playoffs. The Flyers are still in the early days of the final 20-game segment that Larkin pointed out, yes, but no better way to start it than with four consecutive wins.

So, while the Flyers haven’t often been considered among the cream of the Eastern Conference crop, maybe it’s time that changes. An injury to James van Riemsdyk hurts, but if he’s back by the post-season and Philadelphia keeps clicking at they have, there may be no team deeper, nor as dangerous, as the Flyers.

(All advanced statistics via NaturalStatTrick)

More From The Hockey News