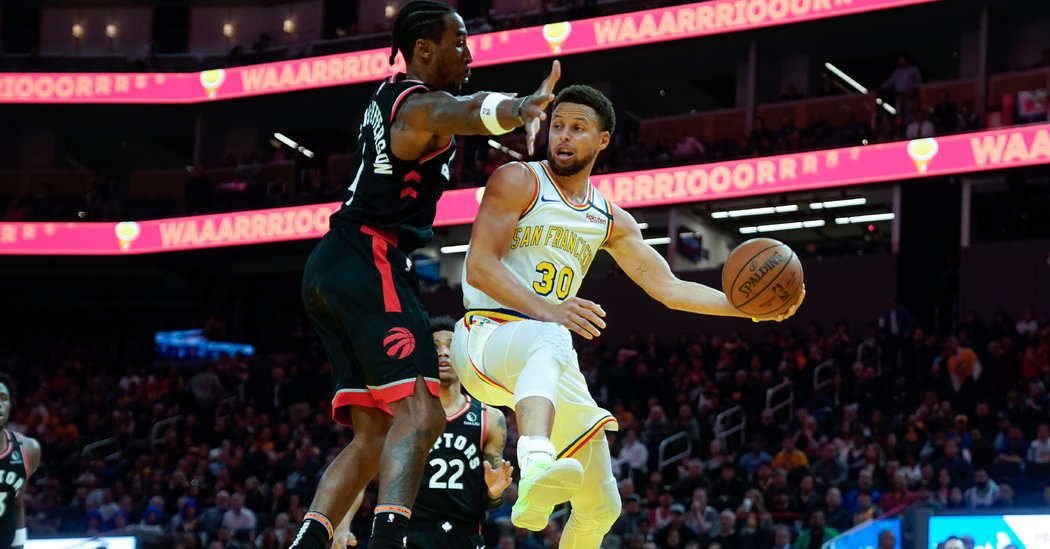 It was Stephen Curry vs. Kyle Lowry again Thursday night, as the Golden State Warriors faced off against the Toronto Raptors in their first matchup since last year’s N.B.A. finals. The game went back and forth, and just like in the series-clinching Game 6 of the finals at Oracle Arena, the Raptors prevailed in the final minutes.

The similarities end there.

Nine months after losing in the finals, the Warriors have the worst record in the league. Curry made his return on Thursday against the Raptors after missing 58 games with a broken left hand, and just in time to become the answer to a trivia question: He was the only Warriors player in the lineup who appeared in the 2019 N.B.A. finals against Toronto.

Kevin Durant is in Brooklyn. Klay Thompson is out for the season with a knee injury. Draymond Green and Kevon Looney both sat with injuries. Championship mainstays like Shaun Livingston (retired) and Andre Iguodala (Miami Heat) have moved on. The Warriors now play at the Chase Center, a new arena in downtown San Francisco.

In a season that has been humbling for everyone involved, Coach Steve Kerr was excited to see his franchise player return.

“I think there will be a sense of energy and enthusiasm the rest of the season,” Kerr said before the game. “To me, this is sort of the beginning of next season in a lot of ways.”

Curry scored 23 points in 27 minutes on 6-of-16 shooting, and while he was only 3 of 12 from beyond the arc in the loss, a 4-point play in the third quarter reminded everyone why he is still the single most exciting player in the league to watch. No lead ever feels safe when Curry is on the floor.

“It felt great. There was a lot of energy,” he said. “The anticipation for getting back out there tonight, just getting out on the floor and seeing what was going to happen. It’s kind of a cool moment just with the excitement and energy in the building.”

It was playoff energy for a team that is, at least not this year, playoff-bound. The box score illustrated what a strange transitional season it has been for the Warriors. Aside from Curry, four other Warriors scored in double figures: Damion Lee, who has 94 games of N.B.A. experience; Andrew Wiggins, recently acquired from the Minnesota Timberwolves for D’Angelo Russell; Eric Paschall, the 41st pick in the 2019 draft; and Marquese Chriss, a former lottery pick who was waived in January and re-signed to a two-year contract a month later.

If Golden State’s downturn this season comes as a surprise, Toronto’s impressive regular season has been just as eye-opening. Just weeks after bringing the Larry O’Brien trophy north of the border for the first time, the Raptors watched Kawhi Leonard, the most valuable player of the finals, join the Los Angeles Clippers in free agency, and lost Danny Green, their two-way stalwart guard, to the Los Angeles Lakers. While the rest of the championship core remained, many expected Toronto to take a step back this season. Some prognosticators even picked the Raptors to miss the playoffs entirely.

Those predictions seem realistic when you consider the rash of injuries that has hit the Raptors’ roster throughout the season. All of their top eight players have missed games. Some of those absences have been long-term. Their man games lost to injury total has rivaled the Warriors’.

Under these circumstances, it would have been easy to understand if the Raptors had their own disappointing season. Instead, they have mostly replicated last year’s regular-season success, and they put together a franchise-record 15-game winning streak before the All-Star break in February.

Thursday’s win improved their record to 44-18, giving them a slight lead over the Boston Celtics for the No. 2 seed in the Eastern Conference. The victory also clinched a seventh-consecutive playoff berth for the Raptors. It’s the earliest they’ve clinched a postseason spot in franchise history.

Nick Nurse, a front-runner for the Coach of the Year Award, has made every lineup combination work, juggling injuries that have required a nightly collective effort by Toronto to overcome these setbacks.

Against the Warriors, the Raptors were without Marc Gasol, who has been out since late January with a hamstring injury. Also sidelined was Fred VanVleet, who missed his fourth-straight game with a shoulder injury. In a familiar script, Toronto received contributions across its entire roster.

Norman Powell scored a career-high 37 points. Lowry added 26 points and 10 assists, the same totals he tallied in Game 6 of the N.B.A. finals last year. Serge Ibaka was a dominating presence on the glass with 13 rebounds. The undrafted rookie Terence Davis had 10 points in 17 minutes, including two posterizing dunks in the second quarter.

If the Warriors are already looking ahead to next season, the Raptors are preparing for another deep playoff run. And while Kerr is hoping that Curry’s energy will power the team down the stretch, Nurse wants to continue to groom and prepare Pascal Siakam, a first-time All-Star, to be the team’s go-to option in the playoffs.

Against the Warriors, Siakam struggled through a 5-for-17 shooting night but came up with huge offensive plays in the closing minutes of the fourth quarter to put the game away.

“We are trying to get him a lot of looks and a lot of reps,” Nurse said after the game. “Even though it might not be super high percentage stuff, I want him to get a feel for what’s happening all over the floor.”

While the Raptors are counting on Siakam to make a leap in the postseason, they have also taken a page from Golden State’s famous slogan during their recent championship run: Strength in numbers. Without a dominant superstar in their lineup, the Raptors have pushed through with the same championship resolve that the Warriors showed in last year’s finals, when they fought through season-ending injuries to Durant and Thompson and nearly forced a deciding seventh game in Toronto.

The Raptors’ defense ranks second overall in the league, and they have an impressive 21-9 record on the road. These are numbers that bode well for a team looking to prove it is still in the conversation as a championship contender come playoff time.

But for the Warriors, and especially for Curry, the rest of this season is about something else entirely. Curry, a two-time M.V.P. and three-time N.B.A. champion, looked at Thursday night as the jumping-off point for Golden State’s climb back to the top.

“We’re trying to build something new based off the culture that we have and that championship identity,” he said. “It’s going to take some time, but it was fun just getting out there and playing with the guys where you’re trying to build chemistry on the fly.”