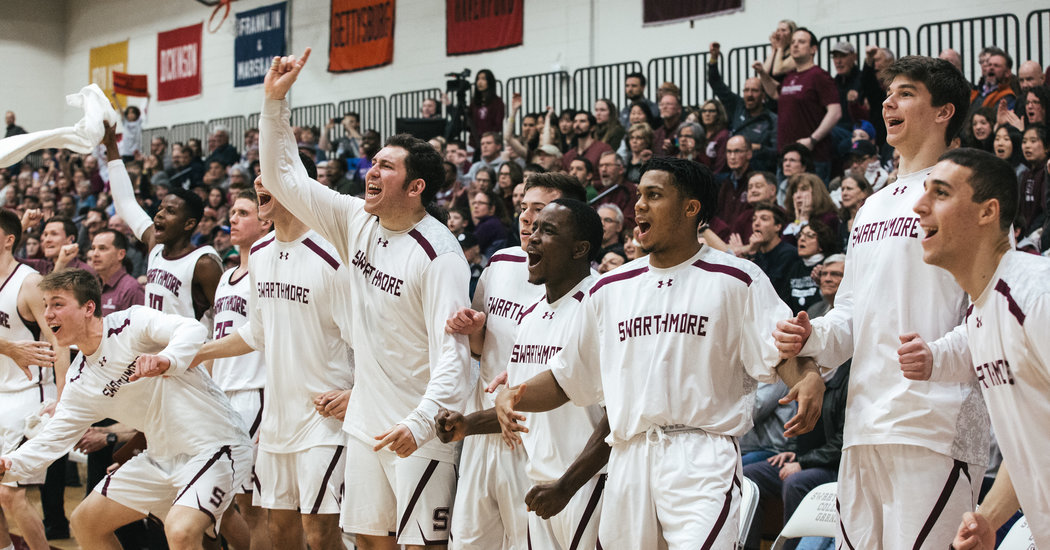 SWARTHMORE, Pa. — A handwritten letter from Landry Kosmalski, the Swarthmore College men’s basketball coach, has been framed and hanging in Nate Shafer’s bedroom at his family’s home in McLean, Va., since he received it in high school.

In forceful language, the coach wrote that Swarthmore — though it had not won a conference title since 1951, had never reached the national championship tournament and had just ended a streak of 18 losing seasons — would soon become one of the nation’s best Division III programs and that Shafer would be a big part of it.

“I’d say it’s come true,” Shafer, a senior co-captain on the team, said of the letter.

Indeed, Swarthmore is heading into the 64-team Division III N.C.A.A. basketball tournament, which begins Friday, as the top seed. The Garnet reached the championship game last season, and were 26-0 this season before being a stunning loss to eighth-ranked Johns Hopkins in the Centennial Conference tournament final on Saturday.

Swarthmore’s ascendance has been both methodical and out of nowhere. The college sits about 15 miles southwest of Philadelphia, whose rich basketball heritage never trickled down to the idyllic campus. Athletics had long been looked at as a dalliance here, one that, if pursued too vigorously, might diminish a fine academic reputation. Twenty years ago, the college dropped football. That season, the basketball team was 4-20.Swarthmore did churn out fine tennis teams, though.

Into this environment, Kosmalski, previously an assistant at Davidson College, arrived eight years ago with a vision that his letter to Shafer exemplified — by the message, certainly, but also by the medium.

In an age of immediacy, ruled by emails, texts and Slack channels, Kosmalski establishes relationships with recruits and lays out his program’s values using what is for many a lost art: the handwritten note. It conveys a personal touch, but it is also a symbol of the foundation of Swarthmore’s success: attention to detail in every aspect of the program.

Players sprint from the film room, where they sit in the same seat each session, to the gym for practice, lining up their water bottles side by side. (“In alphabetical order,” an assistant joked.) A recent 1-hour-40-minute practice was scripted with 21 periods and two 45-second water breaks and run with the punctuality of a Swiss train.

“Freshmen coming in really have to be reprogrammed and almost have to learn to play basketball all over again,” Shafer said, nodding to Vinny DeAngelo, a freshman, who concurred.

“Coach would tape parts of the floor,” DeAngelo said. “As a point guard, that’s where I had to get to, and if I was a foot off, it would be, ‘Vinny, get to the stretch spot.’”

The Garnet do play with flair: Ryan Ingram, a junior guard, has a nice Eurostep, and DeAngelo’s opposite-hand finishes at the rim would draw nods on any North Philly playground. But they are personified by Shafer, a 6-foot-6 forward with crafty post moves lifted from a Kevin McHale mix tape.

In a sport that prizes quickness, Shafer operates at three speeds — deliberate, plodding and glacial — and later than sooner exploits his defender’s impatience to create space for a jump hook, a drop step or an up-and-under.

“We’re not the most athletic people,” Ingram said. “We’re smart and we get to our spots, and we execute properly because we work on those things every single day.”

Kosmalski inherited a 3-22 team when he arrived in 2012, and one of the first things he did was briefly bench the program’s career leading scorer. Other players were cut. The Garnet won seven games in his first season, eight in his second and 11 in his third.

“We had aspirations, but nothing was tangible,” said Cam Wiley, who graduated last year after becoming the program’s first all-American. “It was all hopes and dreams.”

Swarthmore won 22 games in Wiley’s first season and 23 the next, winning the conference championship and reaching the round of 16 in its first N.C.A.A. tournament. Two years ago, Swarthmore reached a regional final and last year it got to the title game, where it was beaten by Wisconsin-Oshkosh.

By now, the culture of the program is established. Last summer, when the team traveled to Sweden and Denmark, the players wrote 80 postcards from each country to alumni, acknowledging their support. At the end of a practice, the team gathers to issue put-ups — “the opposite of put-downs,” Kosmalski said — where players point out something a teammate or coach did well that day. When the team huddles in a timeout, players lightly grasp the shorts of the players next to them — a reminder to stay connected.

The rituals are meant to foster bonds at a place where the academics are rigorous and where there are no scholarships to tether athletes to their teams.

They also help to explain why, at a recent practice, the player with the biggest smile was Alec White, a junior who has played 18 minutes this season.

“When I played growing up, my dad would say, “Did you have fun?’” said White, who studies environmental studies and chemistry and loves being a part of the team. “And I’d say, ‘Yeah.’ And he’d say, ‘Then why aren’t you smiling?’ That’s one of the things he’s commented on every time he comes and visits — that I always have a big smile on my face.”

That is no accident. Kosmalski re-examines his program in the off-season and searches for ways to improve it. He came across a TED Talk by Shawn Achor, whose book “The Happiness Advantage” lays out how positivity can lead to a more productive work environment.

“The old-school mentality is you grind it out and you figure it out,” said Kosmalski, whose players write out weekly practice goals. “After a while, you say there’s got to be a better way. It doesn’t mean you’re going to win every game. It doesn’t mean every day is going to be great. But it’s a more optimistic outlook.”

For the conference tournament final, a handwritten “Sold Out” sign hung at the entrance to the 1,278-seat gym — even though admission was free. The student section was full more than an hour before tipoff, and students stood for the entire game.

“They’re the standard for the athletic department,” said Ben Jackson, a catcher on the baseball team, which filled the first two rows of the student section. “Our coaches say: ‘Watch them. They do it right.’”

Across the court, Megan Smith sat behind the bench. A volleyball player who graduated in 1996, she is now a lawyer for the Department of Education. She marveled at the atmosphere. “I’ve seen more Swat spirit tonight than I did in the four years I was here,” she said. “Back then, athletes felt marginalized — like they weren’t as smart as everyone else.”

That was not the case last month on senior night, when the team’s two seniors — Zac O’Dell and Shafer — were honored. Both are all-conference players. It was a very Swarthmore moment.

O’Dell was lauded for the two published chemistry papers he helped write — his favorite is “Bovine Serum Albumin Enhances Silver Nanoparticle Dissolution Kinetics in a Size- and Concentration-Dependent Manner.” And dozens of students from an elementary school where Shafer volunteers came to the game wearing his uniform number.

The game against Johns Hopkins was well played and taut throughout. With the score tied in the final seconds, Johns Hopkins guard Conner Delaney shook loose and rattled in a jumper — the last of his career-high-tying 32 points — as the buzzer sounded. The Swarthmore players retreated to their bench, stunned that all of the detail and togetherness could be undone by a terrific player.

“Obviously we’re in a difficult spot,” Shafer said after the league title and an opportunity for a perfect season vanished. But he was certain that when Swarthmore found out its first-round opponent in the Division III tournament — it turned out it would host Brooklyn College on Friday night — its focus would return to the task at hand, just as it had all season.

“We can’t dwell on this,” Shafer said, as if reciting the handwriting on the wall.