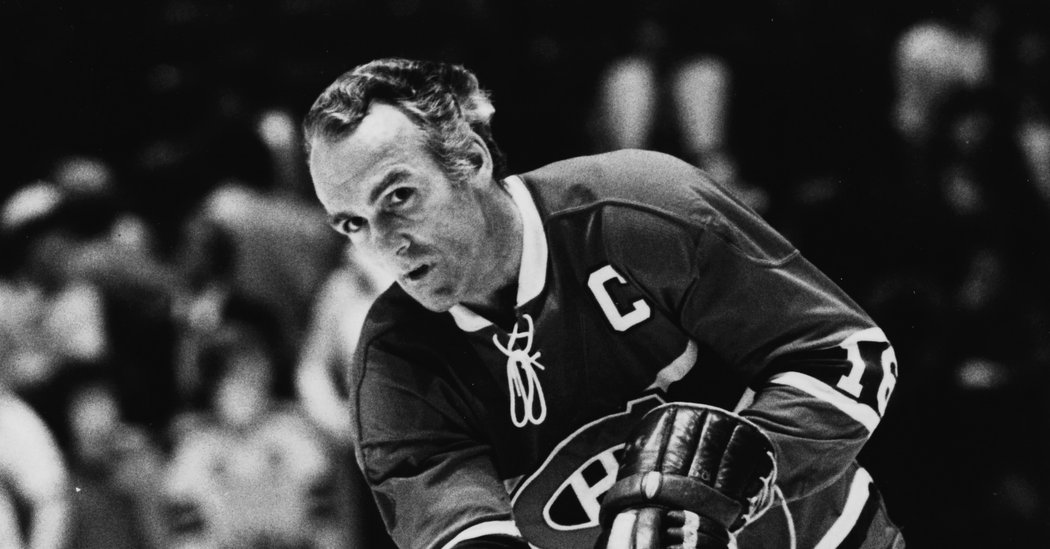 Henri Richard, the Montreal Canadiens’ Hall of Fame center who played on an N.H.L.-record 11 Stanley Cup winners and skated alongside his brother Maurice the Rocket when the Canadiens ruled hockey in the 1950s as the Flying Frenchmen, died on Friday in Laval, Quebec. He was 84.

The Canadiens announced his death. The newspaper Le Journal de Montreal reported in 2015 that he had Alzheimer’s disease.

Henri was 15 years younger than Maurice, who was one of the greatest players in hockey history and a star on three Stanley Cup winners by the time Henri joined the Canadiens in 1955.

He was undersized, even for his era, at 5 feet 7 inches and 160 pounds, and he faced the burden of carrying the Richard name. But he became one of the National Hockey League’s most exciting players. He was a brilliant playmaker, a speedy skater, an outstanding stickhandler and a productive goal-scorer as well. And despite his slight frame, he refused to be intimidated.

Henri Richard centered for Maurice on right wing and Dickie Moore on left wing on an all-Hall of Fame line for Canadien teams that were among the greatest in N.H.L. history. (Moore died in 2015; Maurice Richard, who retired in September 1960, died in 2000.)

“I have been blessed with a lot of great stars over the years,” Frank Selke, the Canadiens’ longtime general manager, was quoted as saying by the Hall of Fame, “but game in and game out, Henri Richard may have been the most valuable player I ever had.”

When Henri was playing junior hockey, he was already facing the pressure of great expectations.

“I was playing for the Junior Canadiens, and we had a game in Toronto against St. Mike’s,” he told The Montreal Gazette in 2009, referring to St. Michael’s College of Toronto, “and the same weekend, the Habs” — the Canadiens’ nickname — “were playing the Leafs, so there was an ad in the paper saying, ‘See the Rocket on Saturday night and the Pocket Rocket on Sunday afternoon,’ and it grew from there.”

When he joined the Canadiens at age 19, their coach, Toe Blake, was skeptical of Henri’s prospects in view of his smallish frame and the pressures he would face.

But Blake, who coached the Canadiens to their five consecutive Stanley Cup victories, once remarked, “The Pocket became a better all-around player than Rocket was.”

Henri Richard was born on Feb. 29, 1936, in Montreal, one of eight children of Alice and Onésime Richard, a machinist for the Canadian Pacific Railway.

“All I ever had in my mind was playing with the Montreal Canadiens and thinking about playing with my brother Maurice,” he told the Hockey Hall of Fame.

He led the Quebec Junior Hockey League in scoring for two consecutive seasons before joining the Canadiens.

Maurice Richard, who had starred for their Stanley Cup winners in 1944, ’46 and ’53, told Henri to keep a low profile among his teammates.

Back then, Blake was asked if Henri could speak English. “Heck, I don’t even know if he can speak French,” he supposedly said.

“We never talked about the game together,” Henri once said in recounting his relationship with Maurice. “If I made a few mistakes while I was playing with him, he never complained. There were a lot of people who told me that playing with Maurice was going to add a lot of pressure, but I never felt any pressure. I never thought about my brother Maurice being a big star.

“Montreal had a lot of great players; it wasn’t just Maurice. Béliveau was there,” Henri said, referring to Hall of Fame center Jean Béliveau. “Boom Boom Geoffrion and Doug Harvey were there. Jacques Plante was in the net.”

“Henri never came to me for advice,” Maurice Richard recalled in “The Flying Frenchmen: Hockey’s Greatest Dynasty,” (1971), a memoir written with Stan Fischler. “What kind of advice could I have given him? He was a better stickhandler than I was and a better skater. The only difference was that he couldn’t score goals the way I could, but he made up for that by becoming a terrific playmaker.”

Henri was also remembered for his Stanley Cup-winning goals.

He gave the Canadiens a 3-2 victory over the Detroit Red Wings for the 1966 league championship on a score early in overtime of Game 6, redirecting a pass past goalie Roger Crozier while Crozier was on his belly. The puck had bounced off his body, and some Wings claimed he had slapped it in with his hand, but the officials saw otherwise.

Henri scored two goals, including the Cup winner, in a 3-2 victory over the Chicago Black Hawks in Game 7 of the 1971 finals after he had been benched by Coach Al MacNeil late in Game 5. Following the benching he called MacNeil “the worst coach I ever played for.”

He is survived by his wife, Lise Richard; his children Michèle, Gilles, Denis, Marie-France and Nathalie; 10 grandchildren; and four great-grandchildren. Henri also had a brother Claude, who played minor-league hockey and was a Canadiens’ prospect but never made it to the N.H.L.

After retiring from hockey, Henri continued to operate a tavern he had bought during his playing days and became one of the Canadiens’ “ambassadors,” former stars who work for the team in community relations.

He gave each of his 10 grandchildren a Stanley Cup championship ring, keeping one for himself.

For all the accolades he earned, Henri never emerged completely from his brother’s shadow. In his later years, he would note how “people still tell me that I’m Maurice’s little brother.”