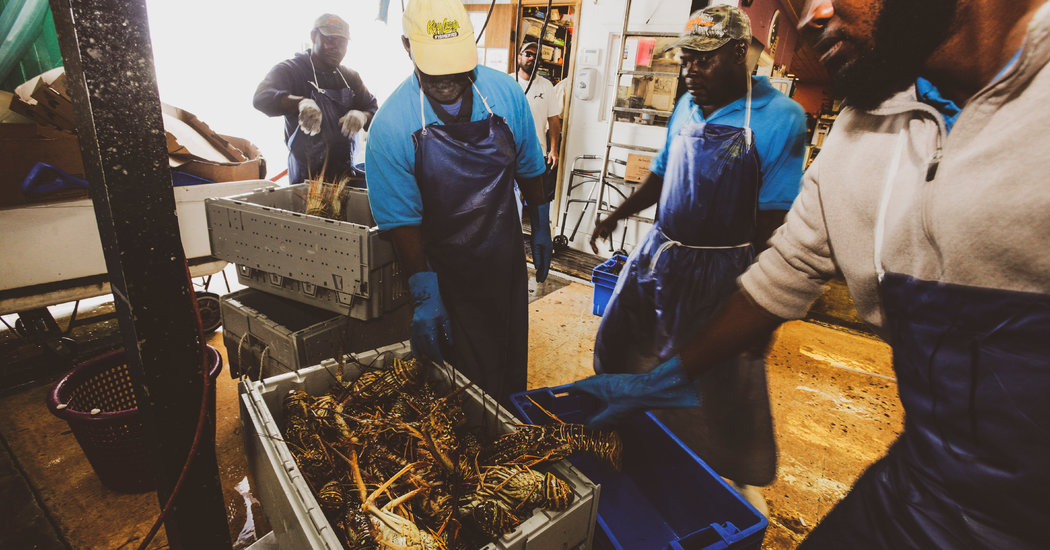 MARATHON, Fla. — Like other commercial fishermen along the east and west coasts, Ethan Wallace had been waiting 18 months for China — the world’s largest importer of live lobster — to lift its crushing retaliatory tariffs on American seafood that had whittled down his profits.

This week, that moment came: Beijing started allowing Chinese businesses to apply for tariff exemptions. But for Mr. Wallace, it no longer mattered.

Tariffs or not, no one in China is buying. The coronavirus outbreak meant the Lunar New Year banquets and wedding parties that feature a fresh lobster on every plate, a symbol of good fortune, were canceled. In several cities, restaurants are shuttered and public indoor gatherings are prohibited. And even if they weren’t, many of the planes that ferry live lobsters aren’t flying to China.

“Boom! Coronavirus,” said Mr. Wallace, 28, after he had steered Piece of the Pie, his 43-foot Torres boat, into the Keys Fisheries marina in Marathon. Although the season continues through the end of March, he and his crew that day took home more lobster traps than pounds of lobster from the Gulf of Mexico.

“Normally I would still be out there fishing for the next 15 days or so,” he said as two mates unloaded wooden traps laced with brown garlands of seaweed that hung like tinsel. Even though the catch trails off near the end of the season, the premium price that buyers are willing to pay for live lobsters that can be shipped to China — $11 to $12 a pound when the year started — was worth the effort.

In January, when the Chinese government closed the live-seafood market in Wuhan, the price of lobster in Florida fell overnight by as much as $5 a pound. Because they will now have to be sold for frozen use, the lobsters aren’t worth as much.

“To not catch very much and have no price, it’s hard to leave your gear out,” said Mr. Wallace, who had already beached most of his 3,200 lobster traps. Between fuel and wages for his crew, a day of lobstering can cost him more than $1,000. “Once they dropped the price down, everybody made a beeline for the dock.”

All around the wharf, spilling over into the parking lot, on the grass and even, in some spots, along the Overseas Highway that traverses the Florida Keys, lobster traps are stacked.

The makeshift skyline of slatted wooden low-rises and high-rises is one emblem of how far and fast the coronavirus outbreak is reverberating throughout the global economy. Production and distribution chains, travel plans and social gatherings have been disrupted in Asia, Europe and North America. The effects are rippling out to the supply of Apple phones and demand for hotel rooms and lobsters.

“The effect of the coronavirus has been a shake-up across the entire lobster supply chain in the U.S. and Canada,” said Annie Tselikis, executive director the Lobster Dealers’ Association in Maine, where four out of five American lobsters are caught.

Now is a slow time for fishing and sales in the state, she said, so the damage has been limited.

Compared with those in Maine, the annual landings from the Florida Keys are tiny, about six million pounds. But half of the catch goes to China, the largest single customer.

Over the past decade, China’s demand for live lobster — a sign of wealth and status among the country’s rapidly growing middle class — has transformed Florida’s lobster industry. The clawless spiny Caribbean lobsters caught off its coast tend to be more prized in China than Maine’s pincered ones.

Known as dragon shrimp, they could be shipped out of Miami and arrive — alive — in China 40 hours later. As prices headed past $20 a pound in 2014, more and more fishing boats, processors and buyers redirected their operations to sell to Asia. Lobster is now the most valuable seafood product harvested in the state.

“The Chinese market has upped the quality of our life,” said Ernie Piton, 55, who was repairing traps outside his garage. He, too, ended his season early. About 10 years ago, he switched to selling live lobsters directly to Chinese buyers who waited on the dock in Key Largo for his boat and then picked through lobsters as they were unloaded. “We’ve been able to put more money in the bank,” Mr. Piton said.

D&D Seafood, which handles more than one million pounds of lobster a year, has a facility five minutes from Miami International Airport to speed shipments. “The virus has knocked out 100 percent of our live business to China,” said Dennis Dopico, the vice president. When the market shut, he got stuck with about 5,000 pounds in the tanks instead of the 15,000 carried on an average day. “We just got lucky,” he said.

For Florida’s fishing industry, the health scare is the latest in a series of unfortunate events. In 2017, Hurricane Irma ripped through the region, wrecking lobster traps and boats and reducing the commercial fishing harvests, said Gary Graves, manager of Keys Fisheries, one of the state’s largest seafood processors and distributors.

In 2018, a trade feud with the United States prompted China to impose an additional 25 percent tariff on American lobster imports — payback for tariffs that the Trump administration had slapped on Chinese goods. Last summer, just after lobster season started, another wave of tariffs from the White House prompted the Chinese to retaliate by further raising import duties on American seafood. Exports of live lobster to China plunged 42 percent from 2018 to 2019, from $148 million to less than $86 million, according to the Maine International Trade Center.

Maine was hit the hardest by the punitive tariffs. Buyers could easily pivot north to Canada, whose waters breed the same species of clawed lobster.

Sixteen hundred miles south, in the Keys, anglers and distributors still sold live lobsters to China, but prices were down. “The tariffs cost us hundreds of thousands of dollars,” said Mr. Piton, the Key Largo fisherman.

He had hoped to make up some lost ground during new year celebrations in China, when pumped-up demand raised prices. “You hope for a good pull right at the end of the season,” he said. “Then the market crashed.”

Mr. Piton lives down the block from Key Largo Fisheries. Last week, a lone lobster boat, Hanna Katherine, arrived with something to sell.

Stepping off the deck, John Greco said he had already taken out about a third of his 2,600 traps, but figured he could earn some extra money since most everyone else had given up for the season.

“It sucks that the price dropped,” he said, as a couple of lobsters scrambled out of the bright blue crates that had been hoisted onto the dock. “But if you don’t go out, you don’t make anything.”

Mr. Greco, 34, and his brother have been trapping lobsters since high school. That morning they had motored out at 5:30, pulling up and emptying about 250 traps throughout the day.

Inside the fishery, a half dozen cutters in white rubber boots and thick gloves wielded long fillet knives, quickly dissevering tubs of yellowtail. Heads went in one plastic-lined cardboard box; skeletons that could be used for chum in another. Nearby, a purple tub was crowded with bonito, often used as bait. “It has a scent to it that fish just adore,” said Rick Hill, a co-owner of Key Largo Fisheries.

The lobsters were weighed in batches, and then dumped into a stainless-steel vat filled with ice and freshwater, a quick way to kill them. Some would probably end up in one of the fishery’s enormous warehouse freezers, which are set at 20 and 30 degrees below zero Fahrenheit.

“I’m not complaining,” Mr. Greco said, but noted that if the Chinese market hadn’t collapsed, he would have earned at least another $1,000 for the day’s labor.

For the U.S. commercial fishing industry, the tariff exemption is a huge relief, but because of the virus, it is still unclear how long it will take to revive trade with China.

In Marathon, the season is winding down, but it reopens in August. “Next year’s right around the corner for us,” Mr. Wallace said.