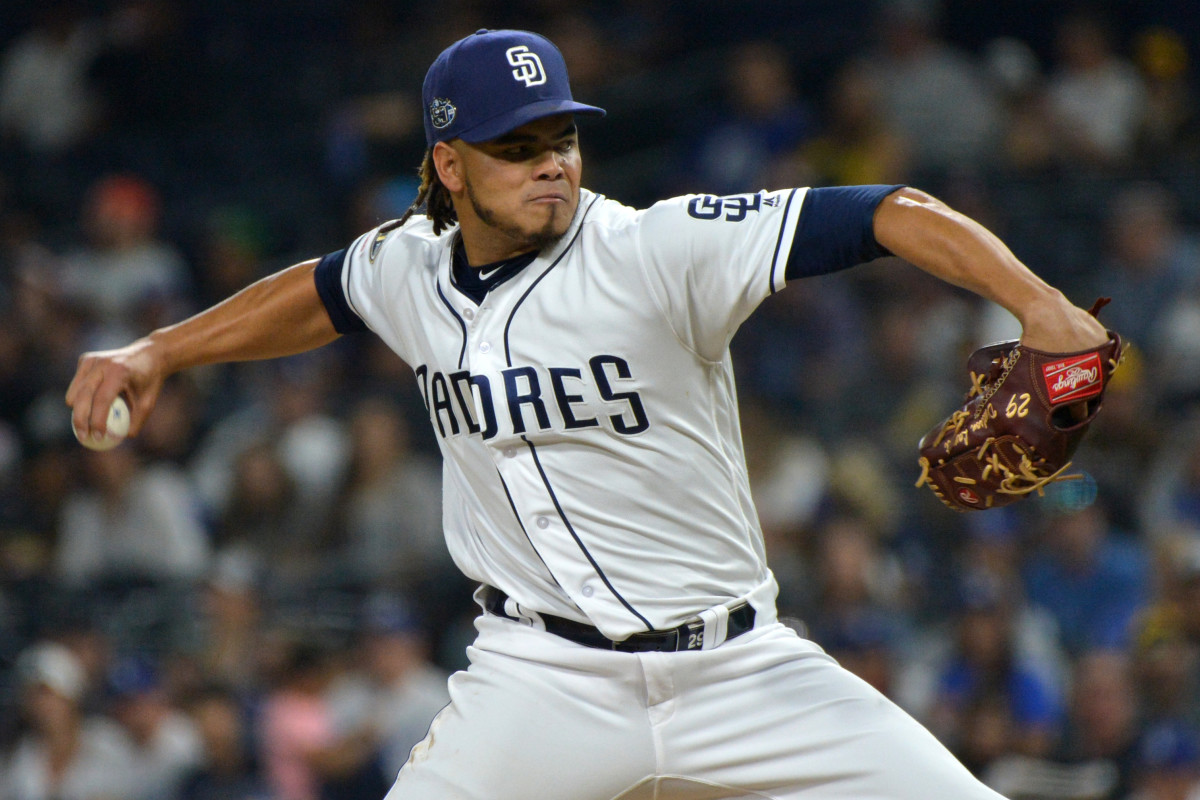 There are a few fantasy sports cliches most are familiar with. “You can’t win your fantasy league in the first round, but you can lose it.” Also, “fantasy drafts are won in the middle rounds,” or something to that effect. The former is just a fancier way of saying that you should mitigate risk with your early picks. The latter is what we’re going to discuss in this article.

Every season there are a handful of players who break out. Maybe it’s a former top prospect that finally puts everything together. Maybe it’s a new face in a new place that just needed a change of scenery or an opportunity to play every day. At its core, a break out season is just a player who significantly overperformed expectations, particularly if they have never reached that level before.

This article will break down six players, three pitchers and three hitters, poised to have a breakout season in 2020 and why the climate is right for them.

A semi-popular breakout candidate last season, Heaney didn’t make his 2019 debut until May 26 due to elbow inflammation. He looked as good as advertised, posting back-to-back solid starts with a combined 18 strikeouts in 11 innings. He ran into some trouble in start No. 3 against Seattle (five runs in 5.2 innings) but only had two more bad starts before going on the DL in July with left shoulder inflammation. That put him on the shelf for about a month, but he returned in August to make four more solid starts before the calendar flipped to September. Opponents hit .327 of Heaney in September, as he saw his monthly ERA balloon to 7.66.

Given what he did in 2017 this is more of a re-breakout, or better yet, a re-introduction. For all of Marquez’s ERA failings last season, he did a lot of things well. His fastball velocity increased for a third consecutive season, now up to 95.7 MPH, his swinging strike rate improved slightly (up to 12.7% from 12.5%), he had a sterling 4.9% walk rate, and he maintained his 1.20 WHIP from the prior season. He also had a 3.54 xFIP.

Clearly, it wasn’t all sunshine and rainbows for Marquez in 2019. His hard hit percentage jumped up to 43.1% and his exit velocity rose to 90.1 MPH. Both of those marks ranked in the bottom 6% of the league. His home-road splits were predictably terrible, he finished the season injured (right arm inflammation), and he only had one month where he posted an ERA under 4.12.

Marquez is only 25 and has shown steady improvement in his MLB career. He’s always going to be spotty at Coors Field, but he could pair 200 strikeouts with a pretty solid WHIP. If he can get a little luckier this season and get that ERA under 4.00—three projection models have his 2020 ERA between 4.00-4.04—he could be a Top 20 pitcher. If things get wild and he posts an ERA closer to his xFIP, you’ll have an SP1

Bichette debuted with a bang in 2019, hitting .311 with 11 home runs in just 46 games. What will he do for an encore? I’m expecting him to be a Top 10 fantasy shortstop this season.

Bichette is expected to hit at the top of a young, but talented Blue Jays lineup. Cavan Biggio, Lourdes Gurriel Jr. and Vladimir Guerrero Jr. should fill out the top-half of Toronto’s order and provide ample opportunities for Bichette to score runs. I have Bichette projected for 92 runs this season, but a few good bounces and 640-plus plate appearances could see him push triple digits in that category.

One area that we do need to see improvement in at the Major League level is his stealing success. He went 4-for-8 last season in his brief time in the majors. He was 15-of-20 in 56 games in Triple-A last season. He stole 32 bases in 43 attempts in a full season at the Double-A level in 2018. Getting 20 steals this season is the expectation, but if Toronto lets him run at will at the top of the lineup, he could exceed that number by more than a handful.

His health at the start of the season is going to be a big factor in determining the ceiling of a potential breakout season, but when he plays, fantasy managers are going to be impressed. Because of his low strikeout rate, Verdugo is a prime candidate to hit at the top of Boston’s lineup, with Rafael Devers, Xander Bogaerts and J.D. Martinez driving him in. Most projection systems have him hanging around 0.13 runs per plate appearance. If he plays close to a full season he could easily eclipse 80 runs.

Verdugo hasn’t quite grown into his power yet, but he’s far from a liability in that category. He had a .181 ISO in 343 at-bats last season, which was just a tick below league average. He still hit at a 19 home runs per 600 plate appearances pace last season and should flirt with 20 if he starts the season on time. He’ll also chip in a handful of steals, but his batting average is where he makes his big gains.

Verdugo projects as a .300 hitter. Only 17 players in Major League Baseball hit .300 last season and only 16 did so in 2018. Until standard leagues move over to OBP, a hit is still way more valuable than a walk to fantasy managers.

Playing time is the only thing that should prevent a breakout for Garcia. He’s done so many things right over the last few seasons. He’s lowered his ground ball rate in each of the last two seasons, going from 52.9% in 2017 to 45.8% last season. He’s also hitting more line drives, ranked in the 90th percentile for sprint speed in 2019 and is leaving Tropicana Field for the friendly hitting confines of Miller Park in 2020.

Those who picked up Garcia from the waiver wire last season saw how useful he could be, particularly in the second half. He hit .293 with 8 home runs, 29 RBI and 22 runs scored in fewer than 200 plate appearances. He didn’t steal much after June, but he still found his way to double digits for the season and could duplicate that total in 2020 if he’s given the green light. He hit 20 home runs despite being a bit unlucky, according to the underlying metics, and now goes from the 6th-worst ballpark for right-handed batters to hit home runs to the 11th-best.

Most projection systems have him around 60-20-70-6-.270, but all in fewer than 500 plate appearances. That’s really the only concern. How much playing time do Ryan Braun and Justin Smoak get? Braun always seems to find his way into the lineup and Smoak is poised for a bounce-back season given the huge disparity between his expected stats and actual stats in 2019. So right now you have three players fighting for two starting spots with Braun likely splitting time at both 1B and OF. If one of those players struggle or get hurt and Garcia can find his way to 550 or 600 plate appearances, he’ll be one of the biggest steals of this year’s fantasy drafts.