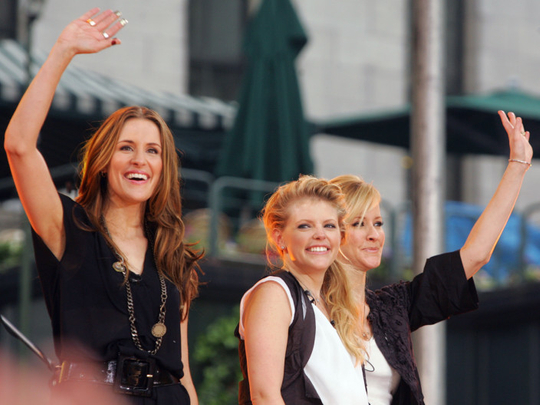 More than a decade after their unceremonious blacklisting from music, The Dixie Chicks on Match 4 announced their first studio album since George W Bush was in the White House.

The Texas-based country trio released their comeback single ‘Gaslighter’ along with a music video, and said they would release their first new album since 2006 on May 1.

The group that soared to fame in the late 1990s all but vanished from music’s main stage after lead singer Natalie Maines told a show in London she was “ashamed” that Bush hailed from Texas — and that the band did “not want this war, this violence,” referring to the then-impending invasion of Iraq.

The comment went viral and many country radio stations quickly ditched their music — which included hits like ‘Wide Open Spaces’, ‘Goodbye Earl’ and a popular cover of Fleetwood Mac’s ‘Landslide’.

“Can the words that I said / Send somebody so over the edge / That they’d write me a letter / Saying that I better Shut up and sing / Or my life will be over?” Maines sings in the group’s only mainstream success post-incident to date, ‘Not Ready To Make Nice’.

Country is considered by many as US music’s most conservative genre. Many critics saw the trio’s ouster as a turning point that emphatically erased any edge it had left, with artists fearing getting “Dixie Chicked” if they voiced opinions.

“I feel like we are tainted,” Maines told Rolling Stone in 2013.

But on Wednesday, the group was back in full force: in addition to the single and video, they published a promotional photo featured Maines, Emily Robison and Martie Maguire wielding Statue of Liberty-esque torches while wearing gas masks, in a battlefield-esque landscape bathed in sunset pink.

‘Gaslighter’ is reminiscent of the blistering Dixie Chicks of yore, featuring barbed-but-layered lyrics and elaborate harmonies.

Maines’ political streak was by no means short-lived: the 45-year-old has been a vocal critic of US President Donald Trump.

“Listen, I think it’s unbelievable how people are badmouthing the President! It’s unacceptable! This is our President!” she wrote in a 2018 Instagram post brimming with sarcasm.

“How dare you make fun of the mentally ill and elderly?”