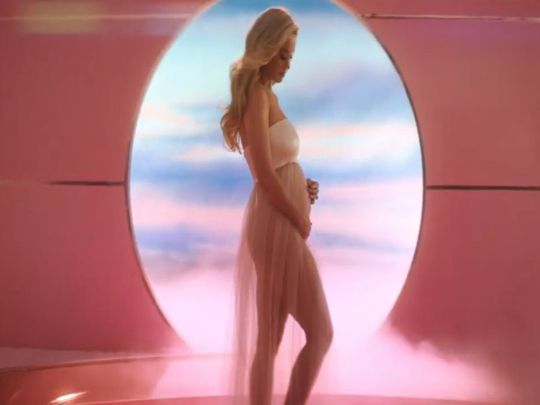 Brace yourselves KatyCats, your queen Katy Perry has announced she’s pregnant in the most creative way — through the video of her highly-anticipated song, ‘Never Worn White’.

The 35-year-old singer made the startling revelation in the music video, dressed in a white wedding gown during one sequence, while wearing a crown of flowers and a floral gown in the next.

Perry, who has been in a long-term relationship with Hollywood star Orlando Bloom, also confirmed her pregnancy on social media, tweeting: “Omg, so glad I don’t have to suck it in anymore.”

She followed this up with another tweet: “Or carry around a big purse lol.”

The singer also took to Instagram Live to confirm the same to her millions of fans. “I am excited. We’re excited and happy and it’s probably the longest secret I’ve ever had to keep. And I like to tell you guys everything but I knew I would tell you in the best way, which is through a piece of music because that’s… I guess that’s how I speak to you. That’s how we speak together to each other,” Perry said.

The first-time mother also spoke of her pregnancy cravings, saying she has developed an affinity towards Tabasco sauce that she now carries around in her purse and has been eating the same burrito for weeks.

Bloom has a nine-year-old son, Flynn, whom he shares with his ex-wife Miranda Kerr.

Perry and Bloom were engaged in February 2019, after sparking rumours of being a couple in 2016.