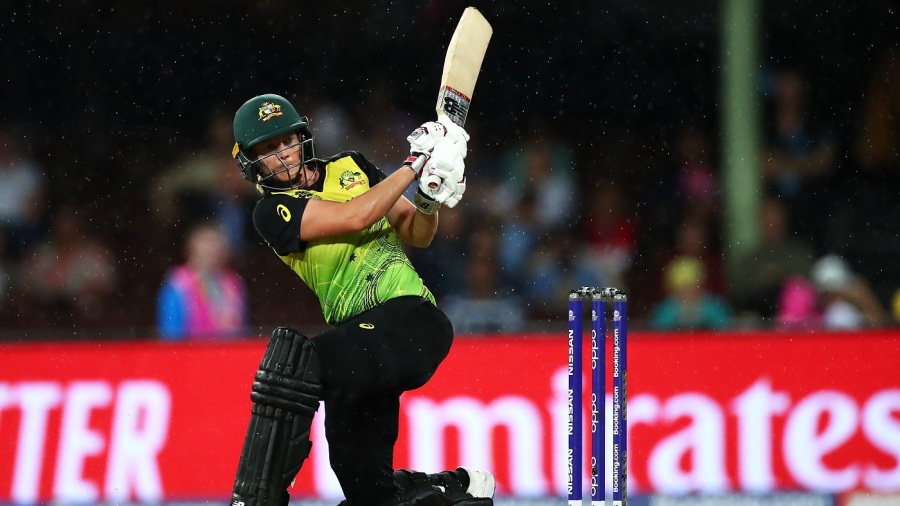 Australia defied Sydney’s rain, a doughty South Africa and the absence of their hamstrung talisman Ellyse Perry to survive a nerve-shredding semi-final at the SCG and progress to the Twenty20 World Cup final at the MCG on Sunday: an event that had been marketed so strongly and pointedly around the world’s No. 1 team and tournament hosts getting there.

After India’s advance to the decider was concluded by showers that caused the abandonment of their semi-final against England, conditions improved long enough for Australia to bat their full 20 overs before being required to defend 97 runs from 13 overs following another shower. The South Africans were chasing that much due to a swift start from Alyssa Healy and Beth Mooney, before captain Meg Lanning provided the spine of an innings that rather fell away in the face of Nadine de Klerk – subbing in for the ill Marizanne Kapp.

Nevertheless, the Australians defended with all the desperation they could muster, plucking three quick wickets and then successfully containing a sublime middle order innings from Laura Wolvaardt. Megan Schutt and Delissa Kimmince were particularly tight with the ball, allowing the hosts to squeak through to the win just as the rain returned to Sydney. They will hope for blue skies and a final victory in Melbourne.

The rain that waved India through to the tournament final on an abandoned first semi-final against England abated in time to allow Australia and South Africa to commence without any initial reduction in their scheduled overs. In sticky conditions, the hosts were sent in to bat, and there was some early movement on offer for the South African seamers. Healy and Mooney, however, were sharp enough to take advantage of the ball skidding obligingly onto the bat when it wasn’t wobbling away from them, and the Australians started swiftly.

Thirty-nine runs from overs 3-6 lifted Australia to 48 from the Powerplay, even if Healy departed for 18 when she flicked one up to midwicket. That dismissal brought Lanning to the middle at No. 3, a position she appeared to have been locked into for the tournament’s pointy end. Accompanied by Mooney, she was able to guide her team as far as 1 for 63 after eight overs, and a tally above 150 looked very likely – a lot to chase at the SCG under lights.

Only once in this tournament had de Klerk been granted a game, against Thailand in Canberra. She admitted later to arriving at the SCG without knowing whether or not she was going to play, only for Kapp to be ruled out due to illness. For an Australian side beset by their own need to change the team due to a hamstrung Ellyse Perry – Kimmince returned – and the return of Sophie Molineux, de Klerk’s accurate medium pace lines and subtle change-ups may have just snuck past their planners.

As it was, she was helped by how the Australians insisted upon changing up their batting line-up without Perry. Jess Jonassen came in as early as No. 4, shunting Ash Gardner and Rachael Haynes down to Nos. 5 and 6. Both Jonassen and Gardner went cheaply, helping to sap the momentum of the innings and forcing Lanning onto the defensive when she should have been able to accelerate. While Haynes and Nicola Carey did better, Lanning was never quite able to release the handbrake. Even if 17 came from the 18th over, only 69 had come from the other 13 after the Powerplay. Lanning, angrily punching her thigh after the final ball of the innings, knew more was needed.

Showers returned just as the innings was concluding, and as the clock ticked towards the 9.49pm cut off time for the minimum 10 overs, Australian heart rates rose. However the skies cleared in time for a 9.40pm start and a 13-over South African chase for 98 to win. In Perry’s absence, Lanning gave the new ball to Schutt and Jonassen, and after they went for nine, Molineux bowled her first ball of the tournament and saw it disappear for six over midwicket thanks to Dane van Niekerk’s powerful slog sweep. After five balls, Molineux had conceded 11, but from the sixth she lured Lizelle Lee into another swing for the leg side boundary, and Gardner ran brilliantly around from long on to complete a vital catch.

Next over Schutt returned, and where in her first over she had been a little short and straight, this time she got things exactly right for line, length and movement to tilt back van Niekerk’s middle stump. Lanning brought on Kimmince next, and her tight lines brought the reward of a Mignon du Preez punch to cover, where the captain dived forward for another superb catch. These wickets and the clamp on the runs were starting to blow the requirement out for South Africa, but Australian eyes were on the skies as well as the scoreboard.

Once the three early wickets fell, at least one Australian eye had to be on the minimum 10 overs required for a match, and in the interim Wolvaardt and Sune Luus played calmly to regather the chase with a steadying partnership. Both showed plenty of ability to hit straight, something that Lanning tried to counter-act with straight fields, while Kimmince and Carey tried wide yorkers as well as changes of pace. Gradually, though, South Africa inched themselves to a position from which victory was possible if not quite likely.

With 27 needed off the last 12 balls, Schutt bowled a superb penultimate over, claiming Luus and conceding just two runs from five balls. Wolvaardt clumped a six off the final ball to leave 19 needed from the final over as the rain returned. Jonassen, handed a greasy ball, had Chloe Tryon pouched off a first up full toss, before Wolvaardt nailed another boundary. Jonassen reverted to over the wicket and did enough to keep the South Africans out. Amid the celebrations at the SCG, one of the broadest smiles of all belonged to none other than Perry.