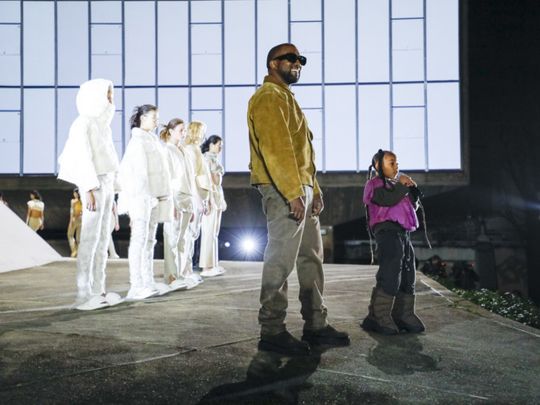 Kanye West presented Yeezy Season 8 in front of the French Communist Party headquarters building here Monday night, but what came down the runway was less a ready-for-retail collection and more a creative, thinking-out-loud work in progress.

And what made this strangely fascinating undertaking, which explored the creation of the collection, even more interesting happened late in the game. That’s when West’s six-year-old daughter North took the spotlight by rapping. (More on that later.)

At a backstage preview, held in the same domed semi-subterranean space at the venue where Thom Browne made his Paris fashion week debut nearly a decade ago, West explained the collection and more.

Rooted in a neutral color palette of gray and beige, the work-in-progress collection was heavy on puffer pieces, which included hooded jackets, tall-collared crop tops and most notably for fans of the Adidas collaboration footwear sneakers with wrap-around quilted uppers that gave them an Ugg boot vibe.

Also in the mix were knit bra tops, a knit upper-arm band with a smartphone pocket, high-waisted sweatpant-legging hybrids (some with protective padding running from hip to knee) that flared at the ankle and a beige T-shirt depicting what appeared to be a horse (rendered in an airbrushed art style worthy of a 1970s-era custom-painted van), face-obscuring hooded parkas and balaclavas.

A few pieces, including a puffer-style jacket and pair of pants, seemed composed of wispy strands of wool packed together like a sheep with bedhead. There was nary a visible button, zipper or closure save for a single drawstring waistband on a pair of baggy trousers.

“This is all experimental,” West said. “We’re just looking at different ways to approach things. I mean, 90% of the collection is in muslin.” (A muslin is a test or fitting garment created early in the design process.) The four-legged residents of his Cody, Wyo, ranch factored into this experiment, he said. “We have 700 sheep the most sheep in America now, I think so we’re trying out different kinds of felting with the wool,” West said. “It’s the beginning of a new language.”

West’s stream-of-consciousness discourse about the collection (which, in all honesty, was a bit hard to follow) touched on inspiration (“the idea [of being] in service, service clothing” the latter of which we took to mean household help, nannies and the like), the story behind a particular hooded, gray, rubberized suit (“I’ve always been obsessed with hazmat [suits] and that whole kind of vibe”) and why he brought his 100-strong Sunday Service choir to a small theater during Paris Fashion Week (“To spread the holy spirit that’s my job as a Christian,” he said in answer to a reporter’s inquiry).

The most illuminating part of the conversation, though, was his explanation as to why he popped up in Paris in the first place to present a work-in-progress collection (which he described as still in its “infant stage” to the high-profile fashion-industry press [Vogue’s Anna Wintour was in the house for the preview, as was GQ editor in chief Will Welch, among others]) after a several-year hiatus from the runway.

“I stopped doing [Sunday Service] merch like four months ago,” West said. “And then we started working on the opera because I wasn’t pushing myself enough, and we were doing $1 million a night in merch. And I remember when I first started doing fashion and we did the first Kanye collections, everyone just said, ‘Do a T-shirt. The Row started out with a T-shirt’ because they had to do a celebrity comparison.” (The Row is the fashion label founded in 2006 by sisters Ashley and Mary-Kate Olsen.)

“We fought to not do T-shirts, and then I looked up and I was only doing T-shirts,” he said. “So we stopped and just started focusing on changing and making new shapes.”

He likened the process of refining the collection in full view of the public to another recent project.

“When I did my first opera at the Hollywood Bowl, two weeks later we did [another] opera, after that we did [another] opera, and then we got to the fourth opera the night before Christmas,” he said. “It’s just getting back on the horse, designing [and] presenting ideas, because we’ve presented so many things that have influenced [the way people dress] like color palettes [and the] shapes of shoes the shape of the [Yeezy] 350 has become the most iconic shoe basically in the last 15 years… You’ll see these shapes start to effect [what] other designers [do].”

With that, the PR handlers called the preview to a close, and everyone in attendance hustled outside to watch the collection make its public debut.

As models circled the dome in the courtyard, video was live-streamed online as well as projected against the facade of the Oscar Niemeyer-designed building.

As the models returned for the finale, West’s young daughter North took to the stage, microphone in hand and rapped the show to a close with two minutes of unexpected uber-cuteness that was all but drowned out by a cacophony of car horns honking their approval (or perhaps disapproval we don’t speak French car horn.)

Was it a show that needed to be on the Paris Fashion Week calendar? No. Did it border on self-indulgent? Probably. Was it a fascinating peek into Kanye West’s creative motivation in the fashion space? No question about it.