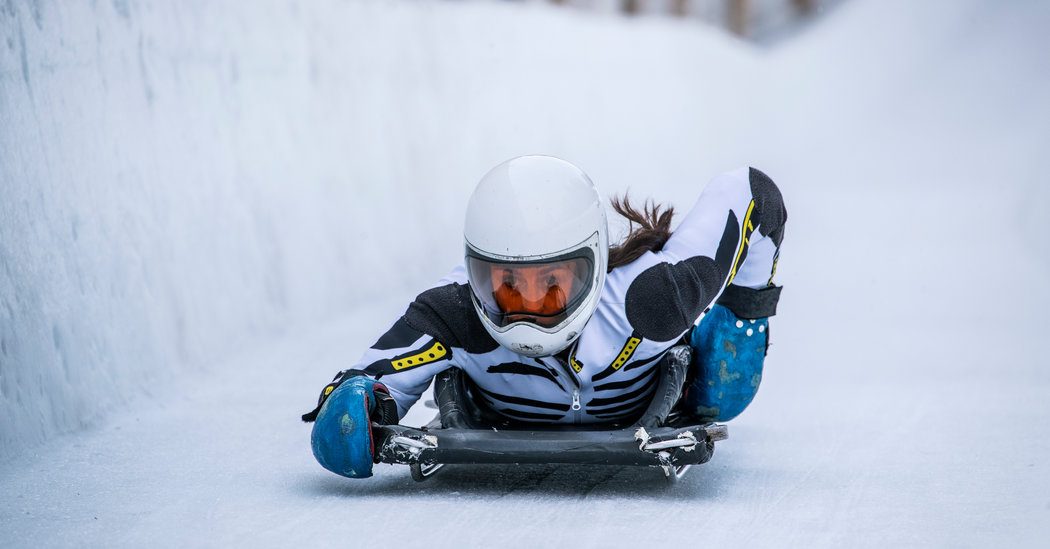 ST. MORITZ, Switzerland — A voice boomed on a loudspeaker on a cold morning in this Swiss resort town: “Karin Kuhn to the box,” it said. Wearing knickerbockers tucked into her knee-high socks, Kuhn raised an arm to signal her presence, stepped into the ice chute and waited for her cue. At the sound of a bell, she sprinted and then threw herself on her almost 100-pound toboggan and hurtled headfirst down the legendary Cresta Run.

Until recently, she would have been watching this, “the craziest thing in the world,” as she calls it, from the sideline. The “Ladies Not Admitted” sign on a locker room made that clear.

The Cresta Run, a three-quarter-mile track and the birthplace of the sport practiced on it, skeleton, the Olympic sport akin to sledding, had kept women off its ice for decades. Kuhn belongs to the members-only club that controls the ice chute and which agreed in 2018 to allow women to participate during a two-year trial.

Now some members of the club, the St. Moritz Tobogganing Club, which is one of the oldest in sports and once attracted the likes of John F. Kennedy and Errol Flynn, are trying to push the Cresta into the 21st century.

Simon Ford is one such member. He feels strongly about opening the run to women. “There is no excuse for a sports club in 2020 to not have equal opportunities,” Ford said. He said it was “more fun” being able to share the ice chute with his four daughters but acknowledged that it was a delicate topic among other members. “Let’s take things slowly,” he said.

The Cresta Run dates to 1885, when it was built for the amusement of British tourists who spent the winter in Switzerland’s mountains. These days, it is still built by hand and operated in a militarylike manner by the St. Moritz Tobogganing Club until the first weekend in March, when it is bulldozed and left to melt.

The Cresta stands out from other ice runs for its corners. It is notorious for the particularly low and open corner, known as the shuttlecock, in which riders reaching speeds of more than 80 miles per hour can easily be flung from the chute and onto a bed of hay. Trips to the emergency room are common, and there have been multiple deaths over the decades.

The St. Moritz club, which has about 1,250 members, a fifth of which are women, is an eclectic and eccentric place where the Union Jack is flown, the club’s history is preserved and traditions that have been going strong for generations continue to thrive. At the close of the season, for example, a member rides down the chute with a smoke bomb (one year, he fell and caught fire).

For Rolf Sachs, the club’s honorary vice president, the Cresta’s spirit is what makes it unique. As he sees it, it’s a combination of eccentricity, genteel sportsmanship and competitiveness — but not at all costs — with a dash of humor and wit. This is the spirit that members value and that some feared would disappear if the club gave women equality on the run. Sachs disagrees.

“It will not change the camaraderie,” said Sachs, who sponsors a night race in which the Cresta is lit by 300 torches. “Instead it will help the club become more spirited as we are just adding extra people who like it.”

Yet some members, including Hans-Jürg Buff, are not pleased with this trial. Buff alluded to the fact that for most of the Cresta’s history it was a gentlemen’s club, and said he believes that by allowing women on the run it is losing its unique selling point. “I do not hate women,” he said, “but men by nature want to be heroes. If women are able to ride the Cresta too, it takes the mystery of it away.”

Women had competed on the Cresta until 1929, at which point they were barred and made nonactive members. It was reasoned that the chest-down positioning needed for skeleton could cause breast cancer, but rumor has it that a woman earning faster times on the chute than her husband was the real reason for it.

In 2018, at the club’s general meeting, members voted to allow women back on the run as part of a two-year trial. In the preceding years, women had been granted a maximum of three slides only on Ladies Day, the last Saturday of the season. (The vote passed with a two-thirds majority.) A request for the club to consider allowing women was made by the United Kingdom Armed Forces Winter Sports Association, the association said. Members of the military had been visiting the Cresta Run since the 1950s, but only the men had been allowed to ride it.

Under the new conditions, women are allowed to ride the Cresta on considerably more days — although far from all — and to compete in races upon invitation. Women retain their status as nonactive members, however, meaning their right to use the Cresta is not officially recognized.

Last month, on Ladies Day, Kuhn, who has been a member of the club for nearly 20 years, was one of four women competing in the Lorna Robertson Challenge Cup, which was first held in 2019. This season, she was able to get 45 runs in, which before the ruling would have taken her at least 15 years to achieve.

It appears that Kuhn and other female riders are here to stay. The trial period for women was recently extended for another year. Beyond that, the club’s president, James Sunley, said, the committee would “take the temperature of all the members and see what they want.”

For now, Kuhn does not seem too bothered by her nonactive membership status or by that “Ladies Not Admitted” sign on the locker room door. “I’m just happy to be riding,” she said, smiling while packing up her knickerbockers and socks.

She was in the locker room.