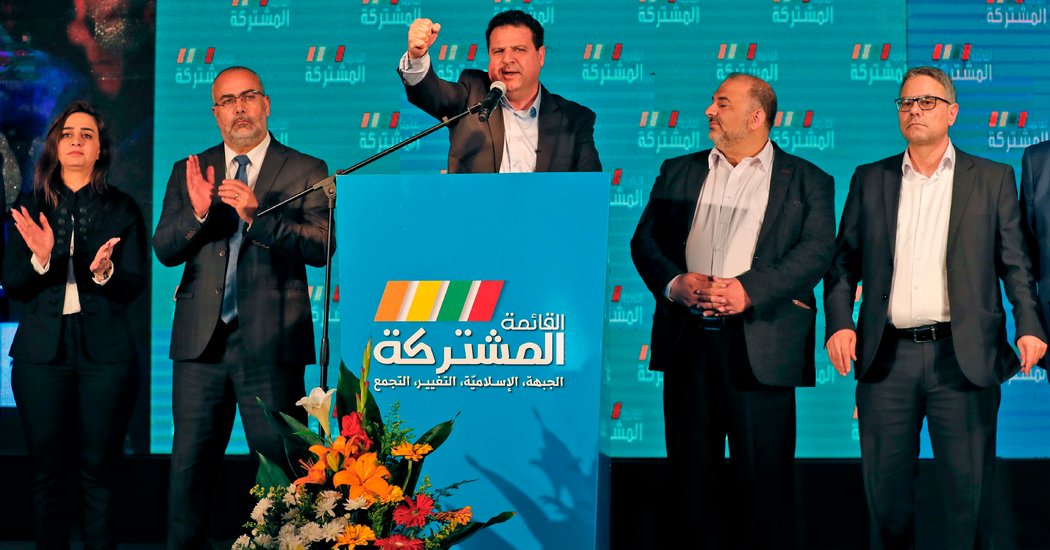 Prime Minister Benjamin Netanyahu’s right-wing bloc won seats in part because of hard-line policies that have disenfranchised Arab Israelis and further delayed a peace deal with the Palestinians.

But so did Mr. Jabareen’s Joint List, an alliance of Arab-led parties that had its best election ever.

The Joint List will now hold at least 15 seats in Parliament, a record for an Arab-led political faction in Israel. That has made it the third-largest parliamentary group, and prevented Mr. Netanyahu from scoring an outright majority.

“It was a mix of happiness and pride at the result for the Arab community, and disappointment at the national result,” Mr. Jabareen said in an interview in his hometown, Umm al-Fahm. “Netanyahu, with all his racist incitement, succeeded in getting more power.”

Counterintuitive as it may initially seem, the two results were in fact intertwined.

Mr. Netanyahu has shored up his base by enacting legislation that alienates Arab citizens and by pursuing a Middle East plan — President Trump’s “deal of the century” — that would annex large tracts of Palestinian land.

But it is exactly those actions that propelled a previously apathetic Arab Israeli electorate to the ballot box.

As a practical matter, whatever gains they made at the ballot box on Monday, little meaningful appears likely to change for Israeli Arabs in a country moving steadily to the right. Indeed, the gains may prove a double-edged sword, and make the Israeli right even stronger.

About two in five Israelis are of Arab ethnicity, but historically, fewer than half of them have participated in Israeli elections. That changed markedly on Monday, when an estimated 64.7 percent of Arab Israelis voted in the country’s third election in less than a year — up from 59.2 percent in the poll last September, and 49.2 percent last April.

One of the greatest bumps was in Mr. Jabareen’s hometown, where turnout rose by 18 points, or about 5,000 voters. Almost all of them voted for the Joint List.

“Netanyahu’s election campaign was strongly racist,” said Hend Marnee Sharkawi, a 34-year-old social worker in the town. “That was what pushed us to go vote.”

Under the plan backed by Mr. Trump and Mr. Netanyahu, it is one of several Arab Israeli towns that would be ceded to a future state of Palestine. But much as many of its residents hope for an independent Palestinian state, they do not believe the deal would create one worthy of the name.

“The motivation behind the high turnout was to topple Netanyahu, the architect of the deal,” said Imad Ghoul, a 45-year-old construction worker in Umm al-Fahm.

The Joint List’s gains lie partly with the appeal of its leader, Ayman Odeh, a charismatic lawyer whose eloquence and approachability make him a marked contrast with the stodgy autocrats in the West Bank and the radical Islamists in Gaza. Mr. Odeh has united a diverse array of ideologies within the alliance, ranging from secular leftists to conservative Islamists.

More women may have supported the Joint List this time around because its roster of female candidates doubled, to four, Ms. Sharkawi reckoned.

In some districts, Joint List coordinators mounted a spirited “get-out-the-vote” campaign for the first time. They focused on women, and enlisted female drivers to ferry women to the polls, said Ahmed Ghazawi, a Joint List activist who coordinated a local campaign in Qalansawe, a predominantly Arab town.

But another significant boost came from Jewish voters. The Joint List’s pollsters believe roughly 20,000 Jewish civilians voted for the group — double the number in September, and possibly the difference between the group winning 14 and 15 seats.

That is partly owing to Mr. Odeh.

“He has really opened the door,” said Louis Fishman, a professor at Brooklyn College who studies the Joint List.

It is also, in part, a reflection of the state of Jewish leftist parties, whose influence and popularity have dwindled as Israeli Jews turn increasingly to the right.

“We’re really at a juncture right now in the Israeli left,” Mr. Fishman said. “It is only now with Jewish-Arab solidarity that the left can move forward.”

The increasingly hard-line policies of Israel’s main centrist opposition party, Blue and White, may also have drawn a few Jewish voters to the Joint List, as well as stirring the Arab electorate.

Benny Gantz, the former army chief who leads Blue and White, tacked to the right to win over voters from Mr. Netanyahu’s base, broadly supporting the aims of the Trump peace plan. But that may have alienated those who wanted to see a greater contrast between Blue and White and Mr. Netanyahu’s Likud party.

“Just like ‘Never Trump’ Republicans in the U.S., Blue and White are ‘Never Bibi’ Likud-niks,” said Gilad Halpern, a radio broadcaster who voted for the Joint List, using a common nickname for Mr. Netanyahu.

The Joint List’s wins may give Arab lawmakers a greater role on the national stage: Mr. Gantz cannot form a coalition to topple Mr. Netanyahu without the Arab alliance.

To deter Mr. Gantz from trying to work with the Joint List, Mr. Netanyahu argued on Wednesday that any coalition featuring the Arab grouping would lack legitimacy. “The Arabs are not part of this equation, and this is the people’s will,” he claimed.

Mr. Netanyahu also described the Joint List as “supporters of terrorists.” Several Joint List lawmakers have met with Palestinian militants convicted of killing Israeli civilians or expressed support for them.

Joint List lawmakers themselves are uncertain whether to join any formal bloc against Mr. Netanyahu.

“Getting rid of Netanyahu does not come at any price,” said Mr. Jabareen, the lawmaker from Umm al-Fahm.

If Mr. Gantz does not back down from the right-leaning positions he staked during the campaign, “then it will be almost impossible to cooperate.”

In the longer term, the Joint List’s challenge is to appeal to even more Jewish voters, while still holding together its diverse coalition of Arab-led parties, Mr. Fishman said.

“My question is: Is this going to be a phenomenon based on the work of Ayman Odeh?” said Mr. Fishman. “Or is it going to be something truly transformative, a new party for the Israeli left?”