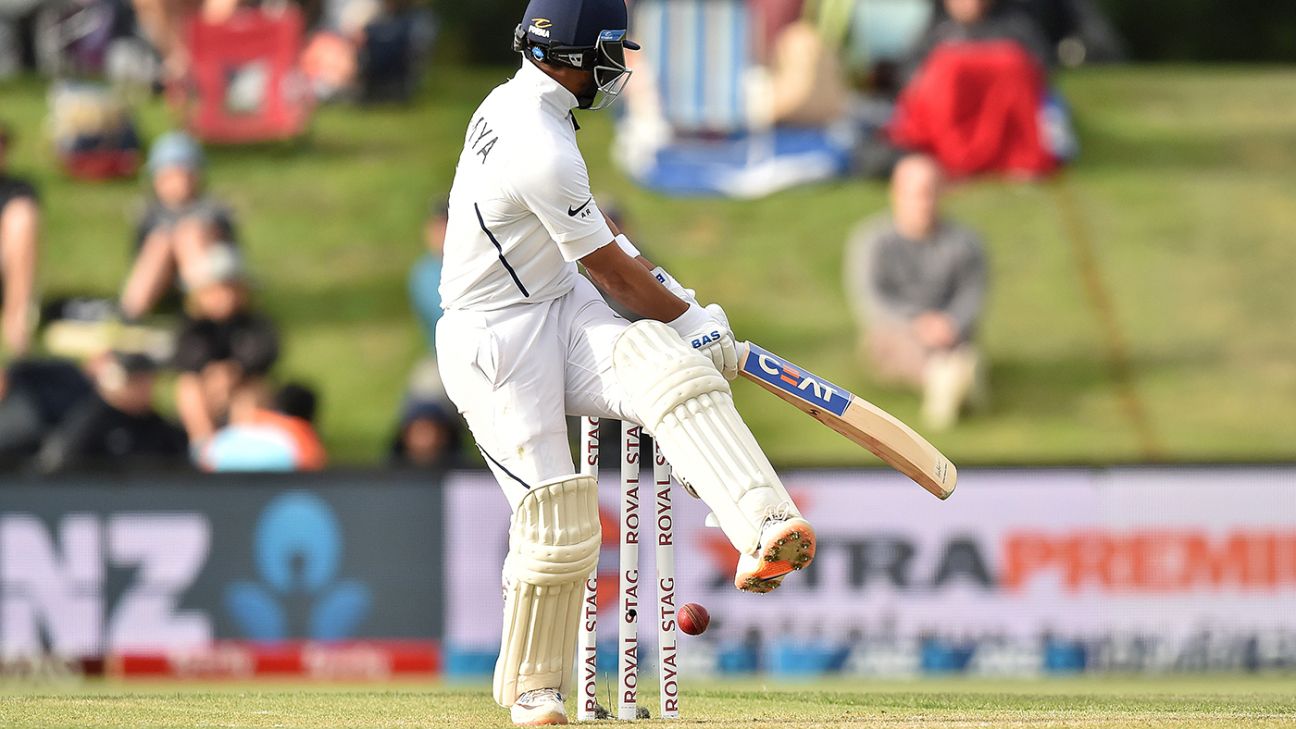 Among the many factors that influenced India’s two-nil defeat to New Zealand in the Test series, former India batsman VVS laxman observed a worrying trend that afflicted some of the batsmen, including captain Virat Kohli, who tallied just 38 runs in four innings and averaged his second-worst 9.50.

“Virat was trapped leg before to the ball coming in twice in the second Test, Mayank Agarwal fell in similar fashion in both innings in Christchurch to Trent Boult’s inswingers, Prithvi Shaw was cramped up and dismissed fending by balls following him in the second innings of both Tests,” Laxman wrote in his column for Times of India.

India’s batting struggled collectively managing just four individual fifties and a highest total of 242, besides being skittled for under 200 on the other three occasions. Laxman felt that though the conditions were tough – India were sent in on green tops in both Tests – New Zealand’s plans were straightforward and that the batsmen should have applied themselves better.

“I am sure the batting group would be hurting, especially, since they take a lot of pride in preparation but were caught napping by New Zealand’s game plans for two Test matches in a row. I agree the conditions were tricky and challenging, but that’s no reason why there shouldn’t have been a greater application from the batsmen.

New Zealand’s plans were straightforward enough – to get swing with the new ball and make use of the lateral movement and, should that fail to produce wickets, to resort to the liberal use of the short ball.”

After the first Test, where particularly in the second innings staring at a large deficit India allowed New Zealand to bombard them with short-pitch stuff, they decided to take it on in Christchurch. While the plan fetched India useful runs, it also led to untimely dismissals of half-centurions Hanuma Vihari and Cheteshwar Pujara in the first innings, and Ajinkya Rahane, who was consistently troubled by that length, in the second.

“Ajinkya Rahane’s a tortured stint in the second innings in Christchurch best illustrated India’s confusion,” Laxman wrote. “For an experienced and accomplished batsman who has scored runs all around the world, Rahane seemed all at sea against Neil Wagner and Kyle Jamieson’s short-ball barrage, and tried to hit his way out of trouble. On that surface, it was a method never designed to succeed.”

Rahane had a forgettable second Test where he made a total of 16 runs, but more than the lack of runs, the lack of control with which he batted in the second innings stood out. He made 9 from 42 in a bizarre innings where he fended at rising deliveries, took a blow to the side of the helmet in attempt to pull before eventually, he was bowled trying to get inside the line of a Wagner short-one that came on slower than he expected. While one former India batsman and chief selector questioned Rahane’s shot selection, the other attributed his struggles to a technical glitch that he felt had crept into Rahane’s game.

“He’s making an extra movement with his hands while batting. He’s moving his bat too much in his backlift. He’s a fraction of a second late on to the ball. It explains why his head isn’t still when the ball is delivered,” Dilip Vengsarkar told Times of India.

Sandeep Patil was more critical: “You need to leave the short balls alone. They were bowling short-pitched stuff on a green top. Your shot selection becomes very important in such a case. You’ve to show a lot of patience and guts.”

Wasim Jaffer, the former India opener and a senior team-mate of Rahane’s in Mumbai when he started out, however, differed on the subject, and felt Rahane needed to trust his natural game, which was to attack.

“Sometimes, I feel that he gets too defensive,” Jaffer observed. “The Ajinkya I know plays the best when he’s positive and looking to score runs and attack. At times, he’s defending balls which he can score off. He’s giving the bowlers too much respect. He’s hit 100s in IPL, so he can do it.”

Jaffer also felt that the “fear of failure” had crept into Rahane’s game.

“I heard about this (batting slowly) when he was playing for Mumbai this season. This happens due to fear of failure. He has led India, he’s got a tremendous overseas record, but all that’s history. Now that he’s been labelled only as a Test player, been out of the India’s limited overs team, human nature is such that one wants to establish himself as a Test specialist. He’s trying to prove a point.

“By doing that, you try to show that ‘I’ll be technically correct. I’ll try to occupy the crease. If you want to just ‘occupy,’ you can call a security guard! Who’ll score the runs? I’m not saying throw your bat around. However, when you’ve so many hundreds behind you, this approach is not acceptable. An ordinary player like me survived on foreign soil, these players are champions.”